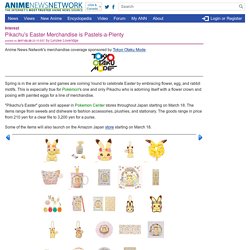 Spring is in the air anime and games are coming 'round to celebrate Easter by embracing flower, egg, and rabbit motifs. This is especially true for Pokémon's one and only Pikachu who is adorning itself with a flower crown and posing with painted eggs for a line of merchandise. "Pikachu's Easter" goods will appear in Pokemon Center stores throughout Japan starting on March 18. The items range from sweets and dishware to fashion accessories, plushies, and stationary. The goods range in price from 210 yen for a clear file to 3,200 yen for a purse. Some of the items will also launch on the Amazon Japan store starting on March 18.

Sub-meter decorative swords just not cutting it for you? 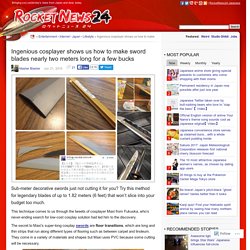 Try this method for legendary blades of up to 1.82 meters (6 feet) that won’t slice into your budget too much. This technique comes to us through the tweets of cosplayer Maxi from Fukuoka, who’s never-ending search for low-cost cosplay solution had led him to the discovery. The secret to Maxi’s super-long cosplay swords are floor transitions, which are long and thin strips that run along different types of flooring such as between carpet and linoleum.

They come in a variety of materials and shapes but Maxi uses PVC because some cutting will be necessary. They also come a in a range of shapes among which Maxi chose one modeled after the Japanese character for “he” (へ). Image: Twitter/@Maxifactory His hardware store sold them at lengths of 1.82 meters (6 feet) for about 520 yen (US$5) each, but results may vary depending on the store. To give the sword tip a more realistic appearance he filled it out with some epoxy putty. The Indie Manga About a Girl and Her Moe Tentacle Monster You Need to Read. Recently, people have been sharing the indie series, The Crawling City, which debuted in September. 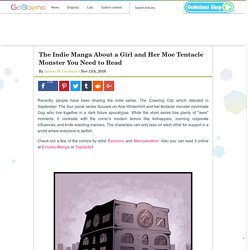 The four panel series focuses on Aria Wintermint and her tentacle monster roommate Gug who live together in a dark future apocalypse. While the short series has plenty of "aww" moments, it contrasts with the comic's modern terrors like kidnappers, looming corporate influences, and knife wielding maniacs. The characters can only lean on each other for support in a world where everyone is selfish.

Check out a few of the comics by artist Parororo and Merryweather. Also you can read it online at Ensoku-Manga or Taptastic! You can read the rest of The Crawling City on Ensoku-Manga and Taptastic. 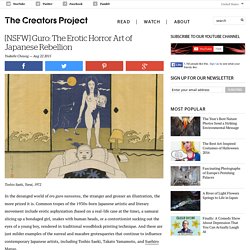 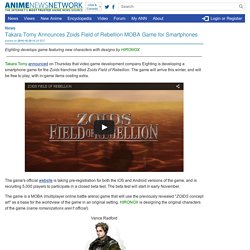 The game will arrive this winter, and will be free to play, with in-game items costing extra. The game's official website is taking pre-registration for both the iOS and Android versions of the game, and is recruiting 5,000 players to participate in a closed beta test. The beta test will start in early November. The game is a MOBA (multiplayer online battle arena) game that will use the previously revealed "ZOIDS concept art" as a base for the worldview of the game in an original setting. Next Sword 3D Live Wallpaper. ICON PACK - Hatsune Miku（Free） Tokyo Fashion. Cosplanner. ANIME!!! Exclusive! Easy Methods of Drawing Eyes! - pixivision. Pokemon GO Evolution Calculator.