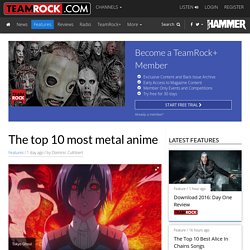 There are plenty of titles that share all the wild whimsy of power metal, or the dark, esoteric themes of Norwegian black, and below are ten of the most metal anime (that aren’t Attack On Titan). Ushio And Tora This throwback shonen series, based on the '90s manga of the same name, rejoices in the same exuberance of classic heavy metal in the Saxon or Iron Maiden vein. Black Butler The Victorian gothic and campy lilt of Cradle Of Filth is ever present in the equally erotic Black Butler. Death Note The instrument of the shinigami falls from the reaper’s realm to ours, and is found by high school student Light Yagami. Hunter x Hunter (2011) In Hunter x Hunter’s darker moments, its long-running contemporaries don’t even come close. Hellsing. Good anime that don't take weeks to get caught up on. Personal Favorite Recent Anime Releases. A few anime recommendations. My top 10 anime of 2015.

List of eleven anime that I strongly recommend. Some different but good anime to check out. 15 actually good anime with no fanservice bullshit. Anime Movie Guide. Movie Count: 63 Do you have feedback, questions, movie suggestions or review copy offers? You can contact us at contact@animemovieguide.com *protected email* I’ve spent more time than I care to think about watching anime movies in my life thus far.

I’ve seen both astoundingly spectacular and horrifically terrible anime movies. To ease the navigation of this guide, here are some anchor links to take you straight to the individual studios: Ten Anime Series You Should See Before You Die. First off I’d just like to say a huge thank you to everyone that read my list of ten anime films you should see before you die—the response has been phenomenal—not just the number of people who read it, but also those who took the time out to get involved in the following discussion. 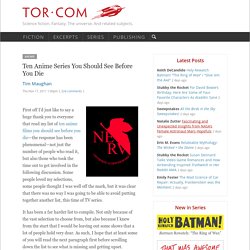 Some people loved my selections, some people thought I was well off the mark, but it was clear that there was no way I was going to be able to avoid putting together another list, this time of TV series. It has been a far harder list to compile. Not only because of the vast selection to choose from, but also because I knew from the start that I would be leaving out some shows that a lot of people hold very dear. As such, I hope that at least some of you will read the next paragraph first before scrolling down the list to see what is missing and getting upset. Cowboy Bebop (1998) – 26 episodes Paranoia Agent (2004) – 13 episodes. Ten Anime Films You Should See Before You Die. One of the most surprising, and gratifying, things that has happened since I started my blog, Tim Maughan Books, a year or so ago is the positive feedback I’ve had for the anime reviewsespecially from people I know are far from being massive fanboys like myself. 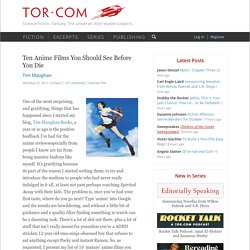 It’s gratifying because its part of the reason I started writing them; to try and introduce the medium to people who had never really indulged in it all, at least not past perhaps watching Spirited Away with their kids. The problem is, once you’ve had your first taste, where do you go next? Type ‘anime’ into Google and the results are bewildering, and without a little bit of guidance and a quality filter finding something to watch can be a daunting task. There’s a lot of shit out there, plus a lot of stuff that isn’t really meant for youunless you’re a ADHD stricken 12 year old emo-ninja-obsessed boy that refuses to eat anything except Pocky and instant Ramen. Akira (1988) Ghost in the Shell (1995) The 10 Best Animation Series to Watch! // Also available in French With a huge amount of anime series produced each year in Japan, it’s easy to be lost! 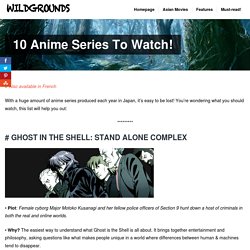 You’re wondering what you should watch, this list will help you out: • Plot: Female cyborg Major Motoko Kusanagi and her fellow police officers of Section 9 hunt down a host of criminals in both the real and online worlds. • Why? The easiest way to understand what Ghost is the Shell is all about. . • Plot: Each of the stories in the series involves several unrelated plots intersecting and crossing each other as events spiral farther and farther out of control. • Why? • Plot: Satou, a 22 years old hikikomori (meaning acute social withdrawal), meets Misaki; she claims she will cure him of his hikikomori ways. • Why? • Plot: In a future where the world has been ravaged by a nuclear apocalyse, there exists salvation in a domed city named “Romdeau”, where humans and their android servants, the autoreivs, live in. Anime, Manga and Uncensored Hentai OVA Torrents - Anime Torrents. One piece - NT. [Ongoing Series] – Anime2Enjoy. 720p 120MB MKV. Top 10 Science Fiction Anime Shows.