The Third & The Seventh 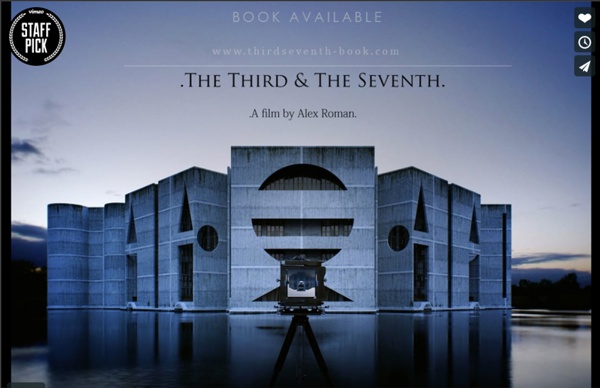 Skhizein - short film by Jeremy Clapin Having been struck by a 150-ton meteorite, Henry has to adapt to living precisely ninety-one centimeters from himself. An animated short that runs for only 13 minutes, this tells the rather comical and yet sad story of a man affected by a meteorite in a most peculiar way. Once he has been struck he finds that his body is now constantly 91 centimetres from where it should be. To open a door, sit down, answer his telephone, etc, he has to perform all of the actions exactly 91 centimetres away from where he normally would, laws of physics having taken a long walk off a short pier. AD Classics: Esherick House / Louis Kahn An architect celebrated for his breathtaking studies of light and materiality in the creation of memorable architecture, Louis Kahn did not fail to maintain his rigor in the Esherick House of Philadelphia, Pennsylvania. Admired for it’s spatial and luminous qualities, this is the first residence of its kind to convey the grand ideas of Kahn-style architecture. The two story dwelling, which is one of only nine private houses designed by Kahn to come into realization, rests on a lively six acre garden. More information on the Esherick House after the break. Kahn’s fusion of materials, natural Apitong wood with manmade beige concrete, is true to his geometrically simple style which allows more emphasis to be placed on lighting and environmental context. The very orthogonal, monolithic composition is punctured by an irregular pattern of windows, revealing the warm interior.

Future Cities 2 Future Cities 2 Augmented Dorian Gray Column, Neil Spiller, © 2013. Other Worlds REGISTRATION IS NOW CLOSED! Animated Short Movies » Life-Changing Arts Movie shorts, or short animations are a unique form of art, which can inspire and enlighten just like any other art form. Sometimes even more so. Here is a selection of inspiring, or for some reason animated short movies, here shown in their original full length. Thanks to all the visitors who have contributed with their detailed suggestions! AD Classics: Yale Center for British Art / Louis Kahn Across the street from Louis Kahn’s first significant piece of architecture stands his last. The Yale Center for British Art was completed in 1974, the year of Kahn’s death and 23 years after its neighbor, The Yale University Art Gallery was finished. A style and theoretical change throughout a career is visible in one scene. Unlike most galleries, the design prompt for the Yale’s British Art Gallery called for very specific needs. Being part of an educational institution the agenda called for several learning oriented spaces. The program consisted of stipulations for exhibition space and storage space for paintings, sculpture, drawings and prints; a rare book collection; a research library; a photograph archive; an auditorium; classrooms; workshops and offices; and conservation facilities.

Lemon Squeezy: Design Tendencies after the Juicy Salif Design as a functional activity ended with Philippe Starks Juicy Salif. This iconic lemon squeezer thrust its sharp tripod legs into the heart of Modernism. From this point on, designers would never be able to escape the inherent useless-ness of their activities. As bitter juice trickled down the sculpted chromed surface it dripped anywhere but where it was intended and it stung the profession with its painful lesson: Use is Useless. Instead of helping us to do things, post-Salif design is a way of helping us understand things. Design helps us to navigate our relationship to contemporary context.

15 Amazing Animated Short films - StumbleUpon We all love short animated films, but creating short film is very hard task. Putting whole story in 5 to 10 minutes is not easy. Can you imagine? Few films produced after working hard more than 6 years! Here we collected 15 dazzling animated short films for your inspiration. You can find different genres in these movies like heart-touching film One life, frightening film The Passenger.

Louis Kahn Progressing from the International Style, Louis Kahn believed buildings should be monumental and spiritually inspiring. In his design for the Salk Institute, he was successful in creating the formal perfection and emotional expressions that he so vigourously tried to achieve. Kahn was commissioned to design the Salk Institute in 1959 by Dr. BLOG.RONCONCOCACOLA.COM: NYC Goes Three Ways By summer 2010, the expansion of bike lanes exposed a clash of long-standing bad habits — such as pedestrians jaywalking, cyclists running red lights, and motorists plowing through crosswalks. The old habits exacerbate attempts to expand ways to use our streets; existing disfunction makes change more difficult. My master's thesis project at SVA focused on one intersection as a case study. The video aims to show our interconnected role in improving the safety and usability of our streets. The campaign is named '3-Way Street' and is made up of a poster series, a video and website.

warehouse live work style - Lee Road, SE3 - Greenwich, 5000 sq ft pub available SE3_Greenwich Lee Road 4700 sq ft pub available - ground floor and basement Pub available, ground floor 3000 sq ft, basement 1700 sq ft. Ground floor is bright, has high ceiling, large windows and currently is just a large open space. AD Classics: Indian Institute of Management / Louis Kahn While Louis Kahn was designing the National Assembly Building in Bangladesh in 1962, he was approached by an admiring Indian architect, Balkrishna Doshi, to design the 60 acre campus for the Indian Institute of Management in Ahmedabad, India. Much like his project in Bangladesh, he was faced with a culture enamored in tradition, as well as an arid desert climate. For Kahn, the design of the institute was more than just efficient spatial planning of the classrooms; he began to question the design of the educational infrastructure where the classroom was just the first phase of learning for the students. In 1961, a visionary group of industrialists collaborated with the Harvard Business School to create a new school focused on the advancement of specific professions to advance India’s industry.

The Survey of London The Survey of London Volume XLII.11 Southern Kensington: Kensington Square to Earl's Court Athlone Press – 502pp - £55 An addict with a new volume of the Survey of London is like Kenneth Grahame's Mole with a picnic basket. Rifling its contents is sheer pleasure all the way, and even if he thinks that he knows what is going to be in it, it always spills out surprises. The latest volume is no exception, even though it covers an area which contains few distinguished buildings and a good many depressing ones. AD Classics: Kimbell Art Museum / Louis Kahn Located in Fort Worth, Texas, the Kimbell Art Museum by Louis Kahn has become a mecca for all who are interested in modern architecture. The element of natural light is the main focus of the design, and creates elegant spaces that are perfectly suited for the art that it houses. More on Louis Kahn and the Kimbell Art Museum after the break. The distinct form of the Kimbell Museum’s cycloid barrel vaults are rimmed with narrow plexiglass skylights, providing room for natural light to penetrate into the spaces.

"A FULL-CG animated piece that tries to illustrate architecture art across a photographic point of view where main subjects are already-built spaces. Sometimes in an abstract way. Sometimes surreal." by macopa Apr 17