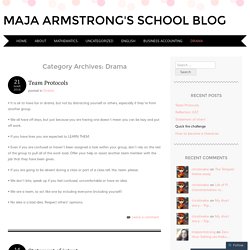 We also used the following elements: tension, dialogue, body movement, time, situation, mood, focus, and conflict. During the second scene, when Jack’s character was tempted to leave class with his friends, we used freeze frame and spoken thought together, to show a contrast between what the character was thinking and what he was saying/doing.

In this scene, we also used the element of time to show the long, boring result of jack’s character’s decision to not ditch with his friends. We used split stage and chorus together, during the third scene, to show that all of the characters were experiencing similar issues, that are typical to teenage life. 1234rheaneilson. Adkincam. Caitlyn's blog. In the production Mo & Jess kill Susie written by Gary Henderson, produced & directed by Murray Lynch, it is the character Jess who is working along side Mo, with the kidnapping and hostage trade of Susie. 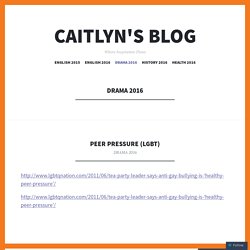 Jess is a relaxed yet troubled and tense character, as she is constantly worried about how Mo acts with Susie. As Jess has children and does not want to harm anyone, this can be seen in her quote of “I am not a violent woman!” It is Jess’s intention in the production to make sure that the ransom money from Susie’s hostage situation is carried out without violence whilst standing up to Mo’s psychotic tendencies. It is my intent to be the character Jess from the production, Mo and Jess kill. It is my intention as Jess to develop a in depth connection to the audience, in a detailed way, showing that I am not playing Jess, but that I am her.

My overriding objectve of this play is for my character Jess to become stronger from the events which have taken place in the past. Brookchurchouse. Zoe248. Kirsty's Blog – Life's a climb. But the views great. Tarajeanfinch. Paige Dyer – Paige Dyer, Year Eleven, Orewa College, 2016. Drama – Ariana Henare. Statement of intent Character: Mervyn Play: Fresh off the boat Our intention is to have the mood quite relaxed and… Read more Statment of intent Each character has an overriding objective. 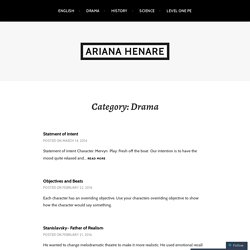 Thexthompson16. Drama. Drama – Geena Hutton. The subject is nothing if not controversial. 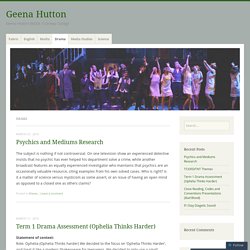 On one television show an experienced detective insists that no psychic has ever helped his department solve a crime, while another broadcast features an equally experienced investigator who maintains that psychics are an occasionally valuable resource, citing examples from his own solved cases. Who is right? Is it a matter of science versus mysticism as some assert, or an issue of having an open mind as opposed to a closed one as others claims? Statement of context: Role: Ophelia (Ophelia Thinks harder) We decided to the focus on ‘Ophelia Thinks Harder’, and treat it like a modern Shakespeare for teenagers.

We decided to only use a small section from the play that shows a very strong and emotional scene between Ophelia and Hamlet. Script Annotation: Given to teacher… Emilyfrancissinfieldsenglishblog2014. I feel as though i used my facial expressions and body language quite well during my performance to show that i was acting as a male. 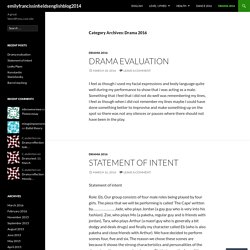 Something that i feel that i did not do well was remembering my lines, i feel as though when i did not remember my lines maybe i could have done something better to improvise and make something up on the spot so there was not any silences or pauses where there should not have been in the play. Statement of intent Role: Eb, Our group consists of four male roles being played by four girls. The piece that we will be performing is called ‘The Cape’ written by……………..

Drama 2016 – Madison's Orewa College Blog. My script: My character is in two separate situations that my partner and I chose. 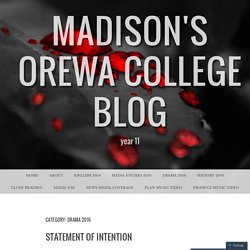 One is a relationship between a teacher and an upset student, and the other is of the older authority and an oblivious young adult. Maja Armstrong's school Blog. My Blog. Statement of Intent – aquillalogan. Developing character When I first received the script and read through my character Mo, my first thoughts were that this was going to be a very challenging character to play. 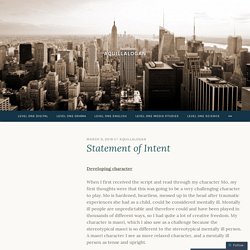 Mo is hardened, heartless, messed up in the head after traumatic experiences she had as a child, could be considered mentally ill. Mentally ill people are unpredictable and therefore could and have been played in thousands of different ways, so I had quite a lot of creative freedom. Level One Drama – 2016. Statement of Intent Script: Verbatim My Character: Danica (Aaron’s sister) Summary: Verbatim is a script based upon real interviews with kiwi citizens, whom have experienced either, the loss of a one through murder, or the loss of a loved on through murdering. 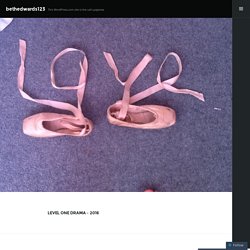 The script follows a young man called Aaron who commits a murder. His loved ones other people affected talk about his actions, their time knowing him and in what ways they were affected. The different characters all have their own views on the event and why it happened. Kapahaka6. Chanellind. Play: The Packer. 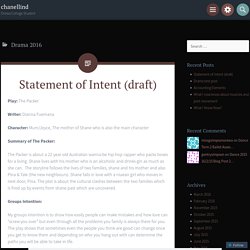 Lhockly30. Jade Matravers. March 16 2016 Statement of context- Role: Jordyn- “The cape” We have decided to focus on scenes 5 and 6 as throughout these scenes it shows how close the group of friends are and how they only have each other in this world. 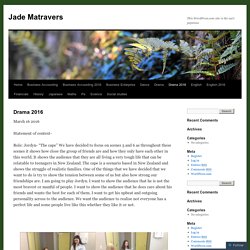 It shows the audience that they are all living a very tough life that can be relatable to teenagers in New Zealand. The cape is a scenario based in New Zealand and shows the struggle of realistic families. Statement of Intent. Maddison J. Lewis Drama INTERNAL 7 March 2016 Statement of Intent: Ty – The Prophet by Hone Kouka Currently, I’m performing as Ty in Hone Kouka’s The Prophet. Ty is a character that has gone far from home, got into trouble, and come back home now with much shame on his head. Niki1111.