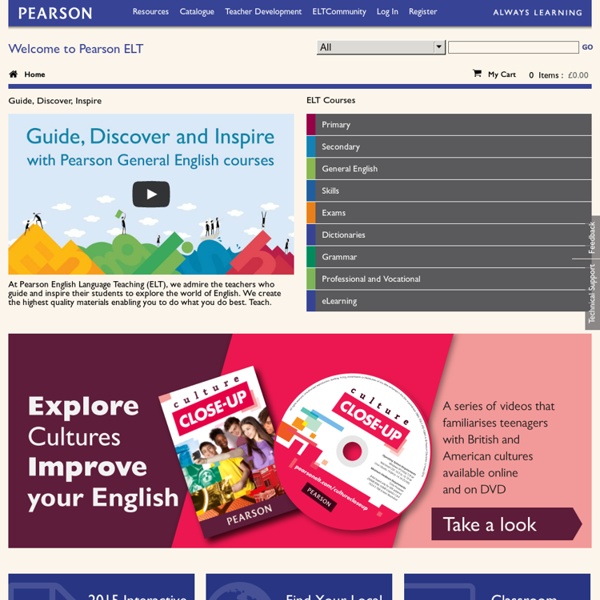 Using photos in the classroom #2 – inspiring role play In last month’s post, we looked at how you could make the most of the ‘surprise factor’ when using a photograph in class. This month, we’ll be exploring how images can help inspire role-play activities that will get your learners thinking and speaking. Don’t forget: each month we’re sharing one of the striking images used in our new course Cambridge English Empower, and asking you to share how you’d use that image in the classroom. You can enter that competition here. One of the best things about a really striking photograph is how it can take the viewer outside their own experience and into someone else’s world.

5 Places To Research “This Day In History” One of my colleagues recently asked students to research what important events occurred in history on their birthdays. I can’t tell you how fun it was to see young students learn about the ancient past in a way that they felt connected to – even if it was just because it was their birthday! Students were able to learn about all kinds of events, from celebrity birthdays and popular music releases to major wars and political events. Then, they were able to share these new historical learnings with their peers.

4 Excellent Infographics on 21st Century Classroom We keep talking alot about the 21st century teachers and students and the skills they need to have but what about the 21st century classroom ? Does it resemble the old traditional classroom or is it different ? Well, probably all of you would agree that we are in front of a new type of classroom, one that is hugely impacted and revolutionized by the integration of technology inside its four corners. It has become an open space of collaborative learning where production is valued over retention, and where communication is the backbone of the learning process. 21st century classroom is idiosyncratic in its features. It has certain distinctive characteristics that you can not find somewhere else and this mostly because of the embrace of new technology, including the mobile one, in education.

BrainBox Wed 15 June 2016 Continental Contrivances Europe has been high on the news agenda for weeks now, which started us thinking – of all the things we in Britain take for granted today, which can we trace back to our continental neighbours? 46 Tools To Make Infographics In The Classroom Infographics are interesting–a mash of (hopefully) easily-consumed visuals (so, symbols, shapes, and images) and added relevant character-based data (so, numbers, words, and brief sentences). The learning application for them is clear, with many academic standards–including the Common Core standards–requiring teachers to use a variety of media forms, charts, and other data for both information reading as well as general fluency. It’s curious they haven’t really “caught on” in schools considering how well they bridge both the old-form textbook habit of cramming tons of information into a small space, while also neatly overlapping with the dynamic and digital world. So if you want to try to make infographics–or better yet have students make them–where do you start? The 46 tools below, curated by Faisal Khan, are a good place to start.

Larry Ferlazzo - Online tools These include The Best Web Tools For English Language Learners (In Other Words, The Ones My Students Regularly Use) and The Best Beginner, Intermediate & Advanced English Language Learner Sites. Now, though, I think it's time to narrow them down to my choices for the "best of the best" or, in other words, an "All-Time Best" list. Here are my choices, and I hope readers will let me know if they agree, disagree, and/or think I've missed some (one key requirement is that they are all free to use). Some of the sites I list could go in multiple categories, but I have placed them in the "domains" I believe they help the most: Obviously, The British Council has tons of great resources. I particularly like their animated Short Stories.

Profile Hi there, I need to make a second counter. As you go past the timeline I go adding a second. Can it be done? Thank you! I'm Spanish, I apologies for my English. 33 days ago by monica garcia