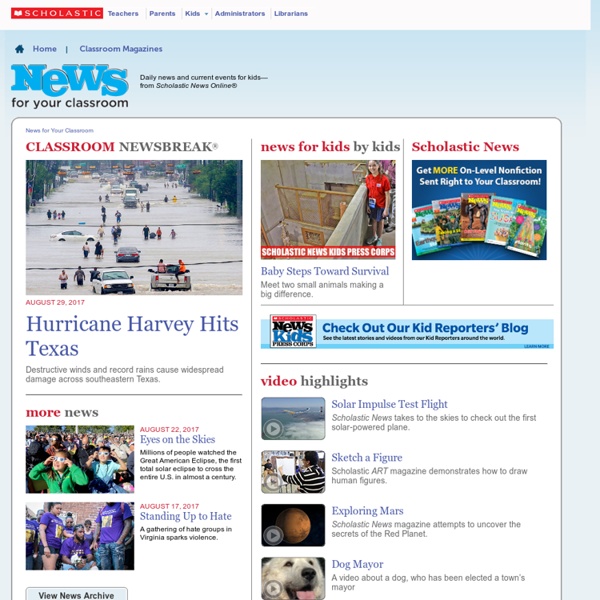 Extreme Photo of the Week Photograph by Mike Schirf “I love the skiing down the best, but I don't love the skinning up,” says 11-year-old Lilliana Libecki, seen here with her dad, Mike, on their recent sailing-skiing expedition to the Antarctic Peninsula in front of Paradise Bay and a colony of Gentoo penguins. It was Lilliana’s very first expedition with her dad, a National Geographic Adventurer of the Year, Expeditions Council grantee, and veteran of 50-some remote expeditions. “I will never ever forget the skiing and icebergs and how curious and unafraid the penguins were,” Liliana says. New York Times lesson plans Photo Do your students follow Humans of New York? The site and the related Tumblr and Facebook page created by the amateur photographer Brandon Stanton have millions of followers, and the “Humans of New York” book, published in October, landed in the No. 1 spot on the New York Times hardcover nonfiction best-seller list its first week on sale.

Twenty-Five Great Ideas for Teaching Current Events Looking for ways to work news into your classroom curriculum? Check out these great ideas for connecting current events to all subjects. Education World is pleased to offer 25 activities -- activities intended to help teachers make use of newspapers and to help students make sense of the news. multiple uses of newspapers & magazines for ELT Newspaper fire orange (Photo credit: NS Newsflash) I love using real things for teaching English. By “real things” I mean something from real life – and not something specially developed for learning or teaching. That’s why I prefer usual movies (and not educational ones – they are hardly very exiting, most of the times, usual radio and not “special English” stations, and usual newspapers (not the ones for ESL learners). Talking about the newspapers, their use in class (and outside too) is limitless.

New Zealand says no to Jedis Mark Hamill, left, Carrie Fisher and Harrison Ford in a scene from "Star Wars." (20th Century-Fox Film Corp. via AP) New Zealand's Jedi Society was established in April 2014. According to the society's Web site, it was established to help aid the "advancement of the Jedi," to promote "understanding and knowledge of the Force" and to "enable eternal vigilance of the Sith." WHAT’S GOING ON IN THIS PICTURE - The Learning Network Blog Photo Students 1. After looking closely at the image above (or at the full-size image), think about these three questions: What is going on in this picture? One in five young people has suffered online abuse, study finds Cyberbullying is a worse problem among teenagers than drug abuse, according to almost half of all young people surveyed in a new study that finds one in five has experienced online abuse. In the global YouGov survey of more than 4,700 teenagers from across the world, a fifth of those who had experienced cyberbullying said it had made them consider suicide, and more than half said being taunted online was worse than being bullied in person. A quarter of those bullied closed down social media accounts and more than a fifth skipped school, the survey commissioned by Vodafone found. Of those who were bullied, almost 40% did not tell their parents, citing feelings of shame or fear.

First Fleet: 04/02/2014, Behind the News Recently we celebrated Australia day on the 26th of January. But why do we mark it on that day in particular? To answer that question, Sarah will take you back in time to 1788, to meet some kids who came to Australia on the First Fleet. School Report - Lesson 4: Broadcasting news This lesson explains how to group stories into bulletins and the art of presentation. It also introduces the art of headline writing. Video: Broadcasting News - Huw Edwards