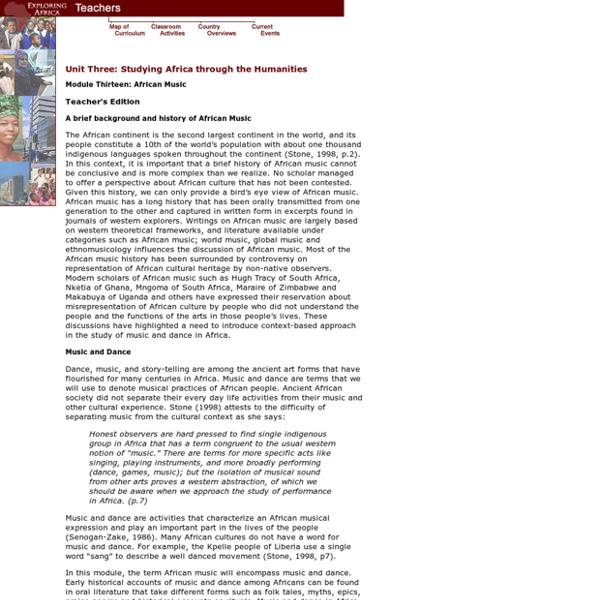 Module Thirteen: African Music Teacher's Edition A brief background and history of African Music The African continent is the second largest continent in the world, and its people constitute a 10th of the world’s population with about one thousand indigenous languages spoken throughout the continent (Stone, 1998, p.2). In this context, it is important that a brief history of African music cannot be conclusive and is more complex than we realize. No scholar managed to offer a perspective about African culture that has not been contested. Music and Dance Dance, music, and story-telling are among the ancient art forms that have flourished for many centuries in Africa. Honest observers are hard pressed to find single indigenous group in Africa that has a term congruent to the usual western notion of “music.” Music and dance are activities that characterize an African musical expression and play an important part in the lives of the people (Senogan-Zake, 1986). Oral traditions Religious Beliefs

Traditional Japanese Music There are several types of traditional, Japanese music (hogaku). Some of the most important ones are listed below: Gagaku: Ancient court music from China and Korea. Traditional African Music-Chastity Traditional and Contemporary African Music Definition of Style Traditional African music is as historically ancient, rich, and diverse as the continent itself. Traditional African music is passed down orally (or aurally) and is not written, and it also relies heavily on percussion instruments of every variety, including xylophones, drums, and tone-producing instruments such as the mbira or "thumb piano." Traditional African music is generally performed with functional intent in celebrations, festivals, and story-telling. Contemporary African music is also highly diverse, but it shares many characteristics of Western popular music in the mid-twentieth-century. The CBMR's concerns in the area of African music focus on the sub-Saharan areas of the African continent, while the music of North Africa falls under the influence of Arabic cultures and is considered a distinct field of inquiry. Musical Example Chaminuka (D. Introductory Bibliography The Garland Encyclopedia of World Music. Graham, Ronnie. Graham, Ronnie. Selected Discography

Search Detail The music of Indonesia is as profoundly diverse and magnificent as its geography, religion, and culture. "Bhinneka Tunggal Ika" is a national motto in the old Javanese language that means, "Unity in Diversity." Diversity of styles is a trademark of Indonesian music. The role of the gamelan orchestra throughout the Indonesian archipelago is quite extensive and important. Gamelan music is associated with social events that serve as an important transitional point in a person's life or community rather than simply serving as entertainment. Throughout Indonesia, it is common to find the gamelan orchestra used for similar purposes from one island to the next. Although Indonesian vocal and instrumental music have obvious cross-regional similarities, the large disparity among music-cultures from one island to another or with various regions on one island has also become socially and culturally problematical. Gamelan in Religion

African Music - Music of Africa By Espie Estrella African Music Africa is a continent where a rich and diverse cultural heritage exists; hundreds of different languages are spoken in Africa. During the 7th century, Arabs reached North Africa and influenced the existing culture. Musical Instruments The drum, played either by hand or by using sticks, is an important musical instrument in African culture. They use drums as a means of communication, in fact, much of their history and culture have been passed on for generations through music. The variety of musical instruments is as diverse as their culture. Singing and Dancing A singing technique called "call and response" is evident in African vocal music. continue reading below our video Loaded: 0% Progress: 0% This technique is still very much used in today's music, for example in gospel music. Dancing requires the movement of various body parts in time to the rhythm. For more information on African music visit our Go Africa website.

KLEZMER MUSIC Klezmer music originated in the 'shtetl' (villages) and the ghettos of Eastern Europe, where itinerant Jewish troubadours, known as 'klezmorim', performed at joyful events ('simkhes'), particularly weddings, since the early middle age till the Nazi and Stalinian prosecutions. It was inspired by secular melodies, popular dances, 'khazones' (khazanut, Jewish liturgy) as well as by the 'nigunim', the simple and often wordless melodies, intended by the 'Hasidim' (orthodox Jews) for approaching God in a kind of ecstatic communion. In (mutual) contact with Slavic, Greek, Ottoman (Turkish), Gypsy and -later- American jazz musicians, using typical scales, tempo and rhythm changes, slight dissonance and a touch of improvisation, the 'klezmorim' acquired the ability to evoke all kinds of emotions, through a very diversified music. back home "Klezmer: it's not just music - it's a way of life!" A klezmer kapelye (~1910) Attention, please: Pronounce 'kleZmer' and not 'kleTzmer'! Feidman Although

Indonesian Gamelan-Chastity “The Importance of Music in the African Culture:More Than Just a song” | All For Music Music has traditionally played an important role in African culture. It is essential in representing the strong African heritage and its importance can be seen in many aspects of the culture. Unlike many cultures today, ancient African cultures encompassed music into their everyday lives. Dance, story-telling and religious practices are all grounded on the music of the culture.(History of African Music) Music is especially vital in African dance, so much so that in many African cultures, there are no two words in the language used to distinguish between the two. The 1500s saw the beginning of slave labor as Africans were brought to North and South America and the Caribbean. Besides using the voice, which has been developed to use various techniques such as complex hard melisma and yodel, a wide array of musical instruments are used. The example below is a video of young dancers entertaining the crowd with apiece of traditional Setswana dance during a wedding in Tlokweng. Works Cited