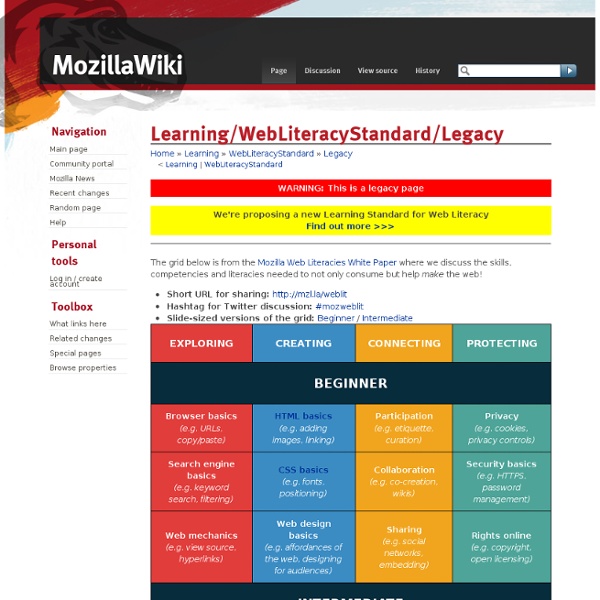 Collusion About this Add-on Using interactive visualizations, Lightbeam enables you to see the first and third party sites you interact with on the Web. As you browse, Lightbeam reveals the full depth of the Web today, including parts that are not transparent to the average user. Using two distinct interactive graphic representations — Graph and List — Lightbeam enables you to examine individual third parties over time and space, identify where they connect to your online activity and provides ways for you to engage with this unique view of the Web. How Lightbeam WorksWhen you activate Lightbeam and visit a website, sometimes called the first party, the add-on creates a real time visualization of all the third parties that are active on that page. How is my information stored? The origins of LightbeamLightbeam began in July 2011 as Collusion, a personal project by Mozilla software developer Atul Varma.

Fake websites, Spoof websites, science spoofs, commercial fake sites Introduction to fake websites Librarians and educators need to be able to illustrate to students and users alike that websites cannot always be trusted to provide truthful and accurate data. This page provides examples of websites that are full of lies, inaccuracies or false information - either for amusement or for more worrying reasons. The list does not include phishing sites however; these are intended to fool a person into believing that they are visiting a legitimate bank site for example; there are already plenty of links to these online already. Fake websites - scientific and commercial All of the following websites are, to the best of my knowledge fake sites, spoof sites or parodies of 'real' sites. Sites are arranged in subject groupings, with what I consider to be the most credible examples at the top; hopefully this will help when you come to choose examples for yourself or students. This page contains examples of scientific and commercial sites. Dihydrogen Monoxide Genochoice

36 Things Every 21st Century Teacher Should Be Able To Do What should every teacher in the 21st century know and be able to do? That’s an interesting question. After just now seeing this excellent post on educatorstechnology.com, I thought I’d contribute to the conversation. I added the twist of ranking them from least complex to most complex, so novices can start at the bottom, and you veterans out there can skip right to 36. 36 Things Every 21st Century Teacher Should Be Able To Do 1. Whether you choose a text message, email, social media message, Skype session, or a Google+ Hangouts depends on who you need to communicate with and why—purpose and audience. 2. Email won’t always work. 3. Hit the Print Screen button near your number pad on a keyboard on Windows. 4. Know what it means to be Rick Roll’d, the difference between a fail and an epic fail, why Steve is a scumbag, and who sad Keannu is. 5. Not everyone loves technology. An RT as an olive branch. 6. 7. Tone is lost when you type. 8. This is dead-simple, but you never know. 9. 10. 11. 12.

Successful Information Literacy Programs - Information Literacy Resources for Librarians What makes a successful Information Literacy Program? How you measure success depends on a number of factors: the environment you work in; the community you serve and how well the goals of your program have been met. Here are some examples of programs that have been deemed a success: 1. Libguides Community: Know What Librarians Know Find 91,166 guides by 21,111 librarians at 1384 libraries worldwide. 2. On its Website, Santa Monica Community College Library, publishes a Guide to Library Research: Seven Steps to Effective Library Research. 3. Tigard (OR) Public Library’s “Re-Boot Camp” consists of two ninety minute sessions offered over two consecutive days. 4. The School Corps program in Portland, Oregon is a model partnership between a public library and the local school community.

Rita F. Pierson: WATCH: How A Teacher Encouraged Her Students With An 'F' TED and The Huffington Post are excited to bring you TEDWeekends, a curated weekend program that introduces a powerful "idea worth spreading" every Friday, anchored in an exceptional TEDTalk. This week's TEDTalk is accompanied by an original blog post from the featured speaker, along with new op-eds, thoughts and responses from the HuffPost community. Watch the talk above, read the blog post and tell us your thoughts below. Become part of the conversation! This blog was produced in collaboration with TED for the TED Talks Education Special. Teachers don't make a lot of money. In the spring of my career, I found myself questioning the choice of my life's work. I was on a plane recently and the flight attendant asked my name. I most certainly realize the extreme importance of being a competent teacher. For every student that finally "got it," for every rookie teacher that said, "you inspired me to stay," I get the raise that never quite made it to my paycheck. -- Rita F.

Mozilla (mozilla) Kicker - gokicker.com The 7 Most Powerful Ideas In Learning Available Right Now Tomorrow’s Learning Today: 7 Shifts To Create A Classroom Of The Future by Terry Heick For professional development around this idea or others you read about on TeachThought, contact us. Let’s take a look at the nebulous idea of the “classroom of the future.” This is all subjective, but it’s worth talking about. Below are some ideas that are truly transformational–not that they haven’t been said before. And the best part? But therein lies the rub: Tomorrow’s learning is already available, and below are 7 of the most compelling and powerful trends, concepts, and resources that represent its promise. The Challenge of Implementation It’s challenging enough to manage a traditional learning environment where the curriculum is handed to you, and meetings are set, and you’re simply there to manage; adding more ingredients to the mix seems like asking for trouble. None of it is really complicated—it just requires new thinking. Tomorrow’s Learning Today: 7 Shifts Of Future Learning 1. 2. 3. 4. 5. 6.

Mozilla Mozilla is a free software community best known for producing the Firefox web browser. The Mozilla community uses, develops, spreads and supports Mozilla products, thereby promoting exclusively free software and open standards, with only minor exceptions.[1] The community is supported institutionally by the Mozilla Foundation and its tax-paying subsidiary, the Mozilla Corporation.[2] In addition to the Firefox browser, Mozilla also produces Thunderbird, Firefox Mobile, the Firefox OS mobile operating system, the bug tracking system Bugzilla and a number of other projects. History[edit] In a report released in November 2012, Mozilla reported that their total revenue for 2011 was $163 million, which was up 33% from $123 million in 2010. Mozilla noted that roughly 85% of their revenue comes from their contract with Google.[14] Values[edit] In December 2013, Mozilla announced funding for the development of non-free games.[21] Promotion Controversy[edit] Software[edit] Firefox logo Firefox[edit]

toolsforsearch - home The Design of Learner-centred, Technology-enhanced Education — English Mozilla Mozilla's Mozjpeg Should Make Firefox Faster By Zach Walton · March 6, 2014 The JPEG has been around for more than 20 years now. When technology gets that old, you either take it out back or teach it some new tricks. Mozilla Unveils New Line Of Firefox OS Devices By Zach Walton · February 24, 2014 Mozilla stumbled upon a hit last year with its Firefox OS devices. Mozilla To Sell Ad Space In Firefox By Zach Walton · February 12, 2014 · 1 Comment Last year, it looked like Mozilla was about to declare war on the ad industry while the ad industry thought the non-profit had already fired the first shot with its decision to block third-party cookies in its browser by default Mozilla Is Building A Firefox Launcher For Android By Zach Walton · February 6, 2014 Firefox OS is doing pretty well for itself in emerging markets thanks to its ability to run on low-end hardware that’s very affordable. Firefox OS Expands To TVs, More Phones In 2014 By Zach Walton · January 6, 2014

4 Web 2.0 Technologies To Inspire Students Collaboration | Q&A 4 Web 2.0 Technologies To Inspire Students By Chris-Rachael Oseland09/14/11 Instructional Technologist Marta Magnuson is used to some skepticism when students see her syllabus. Magnuson said she has faith that the four technologies she finds most useful in the classroom aren't going anywhere. Realistically, Magnuson said, there's a risk these technologies might disappear, but she said she believes teaching students how to use Web 2.0 technologies is almost as important as the course material. By the end of her classes, Magnuson said, she's converted most of her skeptics. Campus Technology recently had an opportunity to talk to Magnuson about how she uses Web 2.0 technologies in both the graduate library science course she teaches at the University of Wisconsin-Milwaukee and in her position as Instructional Technologist at Carthage College in Kenosha, WI. Chris-Rachael Oseland: You say there are four big Web 2.0 technologies you advocate in the classroom.