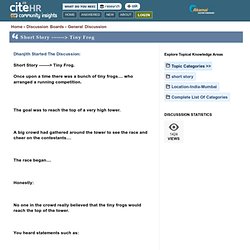 Once upon a time there was a bunch of tiny frogs.... who arranged a running competition. The goal was to reach the top of a very high tower. A big crowd had gathered around the tower to see the race and cheer on the contestants.... (3) Facebook. Candle Race. Last Updated on Wednesday, 28 October 2009 13:09 Written by Rajiv Tulpule Monday, 26 October 2009 15:36 Candle Race No of player – 3/4 groups with 3 players in each group Preparation: Have six candle and match box for each group. 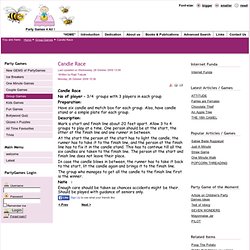 Also, have candle stand or a simple plate for each group. Description: Mark a start and finish line about 20 feet apart. At the start the person at the start has to light the candle, the runner has to take it to the finish line, and the person at the finish line has to fix it in the candle stand. Pass it on.. Hoopla Race. Last Updated on Sunday, 11 May 2008 02:21 Written by Rajiv Tulpule Sunday, 11 May 2008 02:19 Hoopla Race Number of players: 4 groups of 10/12 players. 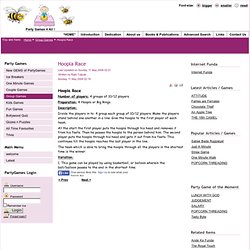 Preparation: 4 Hoopla or Big Rings. Description: Divide the players in to 4 group each group of 10/12 players. At the start the first player puts the hoopla through his head and removes it from his feets. The team which is able to bring the hoopla through all the players in the shortest time is the winner. Card Race. Last Updated on Sunday, 11 May 2008 02:10 Written by Rajiv Tulpule Sunday, 11 May 2008 02:04 Card Race Number of players: 4 groups of 10 players. 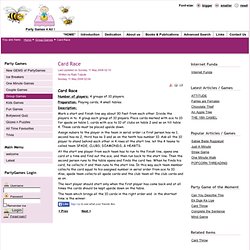 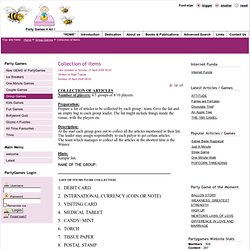 Preparation: Prepare a list of articles to be collected by each group / team. Give the list and an empty bag to each group leader. The list might include things inside the venue, with the players etc. Dancing Balloon. Lemon Race. Saptapadi. Nimbuda Nimbuda. Mala O Mala. Last Updated on Thursday, 01 May 2008 00:49 Written by Rajiv Tulpule Wednesday, 30 April 2008 13:02. 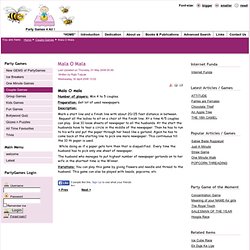 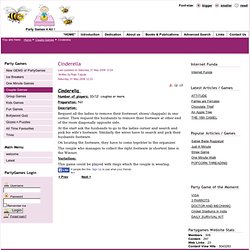 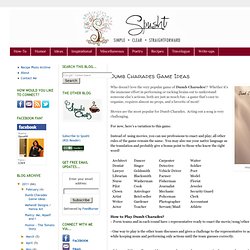 Whether it's the immense effort in performing or racking brains out to understand someone else's actions, both are just as much fun - a game that's easy to organize, requires almost no props, and a favorite of most! Movies are the most popular for Dumb Charades. Acting out a song is very challenging. For now, here's a variation to this game.Instead of using movies, you can use professions to enact and play; all other rules of the game remain the same. Dumb Charades Game Ideas. Pass The Parcel Game Forfeit Ideas.

While hunting for a list of forfeits to play Pass The Parcel with my group of friends, whenever I came across a good one in the past years, I added to my list and finally have a good enough number and variety of fun punishments to keep the game interesting. 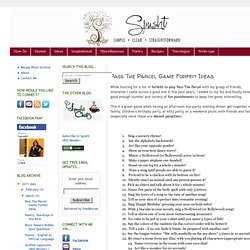 This is a great game when having an afternoon tea-party, evening dinner get-together with family, children's birthday party, at kitty party, or a weekend picnic with friends and family (especially since these are decent penalties). 1. Sing a nursery rhyme! 2. Say the alphabets backwards! 3. 4. 5. 6. 7. 8. 9. 10. One-Minute Game Contest Ideas. Want to have some interesting contests for a birthday party? 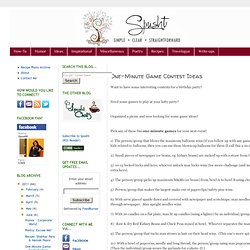 Need some games to play at your kitty party? Organized a picnic and now looking for some game ideas? Pick any of these fun one-minute games for your next event! 1) The person/group that blows the maximum balloons wins (if you follow up with any game for kids related to balloons, then you can use these blown-up balloons for them [I call this 2-in-1 offer!]) 2) Small pieces of newspaper (or beans, eg. kidney beans) are sucked up with a straw from bowl A to bowl B. 3) 10-15 locked locks and keys, whoever unlock max locks wins (for more challenge (and more confusion!) Pls Suggest Me One Minute Games. Lighthouse game - improve your team building performance. Family friendly games at FamilyLobby.com. Materials: Some apples Players: Any This is a couple game. Call the couples and give one apple to each couple. Tell them to hold between their foreheads. Give them instructions-one step forward, two steps backward, three steps left, four steps right, sit, stand, etc. The couple who holds till last carefully and successfully following the instructions is the winner.