Biodiversity and Evolution (Age 14-16) Practical Biology. This website is for teachers of biology in schools and colleges. 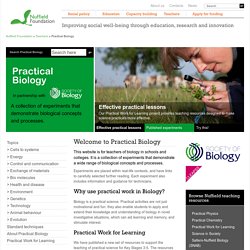 It is a collection of experiments that demonstrate a wide range of biological concepts and processes. Experiments are placed within real-life contexts, and have links to carefully selected further reading. Each experiment also includes information and guidance for technicians. Biology is a practical science. BioNumbers - The Database of Useful Biological Numbers. GM golden rice Guardian. Scientists say they have seen the future of genetically modified foods and have concluded that it is orange or, more precisely, golden. 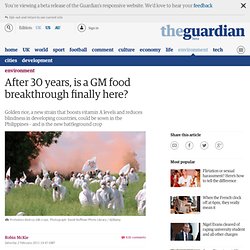 Next year, golden rice – normal rice that has been genetically modified to provide vitamin A to counter blindness and other diseases in children in the developing world – could be given to farmers in the Philippines for planting in paddy fields. Thirty years after scientists first revealed they had created the world's first GM crop, hopes that their potential to ease global malnutrition problems may be realised at last. Bangladesh and Indonesia have indicated they are ready to accept golden rice and other nations, including India, have also said that they are considering planting it. "Vitamin A deficiency is deadly," said Adrian Dubock, a member of the Golden Rice project. "It affects children's immune systems and kills around two million every year in developing countries.

This view is rejected by the scientists involved. 20 amazing facts about the human body. The appendix gets a bad press. 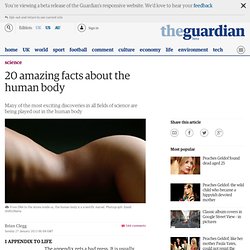 It is usually treated as a body part that lost its function millions of years ago. All it seems to do is occasionally get infected and cause appendicitis. The Linnean Society of London.

Bioethics. What is cloning? What does it have to do with stem cell research? Cloning, or somatic cell nuclear transfer (SCNT), is the technique used to produce Dolly the sheep, the first animal to be produced as a genetic copy of another adult. 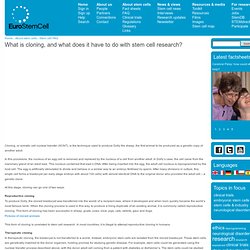 In this procedure, the nucleus of an egg cell is removed and replaced by the nucleus of a cell from another adult. In Dolly’s case, the cell came from the mammary gland of an adult ewe. This nucleus contained that ewe’s DNA. After being inserted into the egg, the adult cell nucleus is reprogrammed by the host cell. The egg is artificially stimulated to divide and behave in a similar way to an embryo fertilised by sperm. At this stage, cloning can go one of two ways: Reproductive cloning To produce Dolly, the cloned blastocyst was transferred into the womb of a recipient ewe, where it developed and when born quickly became the world’s most famous lamb.

What Lives in Your Belly Button? Study Finds "Rain Forest" of Species. The whole thing started about two years ago. An undergrad's only-in-a-biology-lab idea—sampling colleague's navel bacteria for a holiday card—struck a chord with the North Carolina State University team, which had adopted a new focus on citizen science. What better way to get the public interested in science than by showing them their skin 's own thriving ecosystems?

"And belly buttons are just ridiculous enough to appeal to almost everyone," Dunn added. What's more, given the belly button's status as one of the body's most rarely scrubbed crannies, it offered researchers a chance to study as close to a pristine microbial landscape as is possible on the modern human. So in early 2011 the team set up shop at the ScienceOnline science communicators' conference and at the North Carolina Museum of Natural Sciences . The Belly Button Biodiversity project had officially begun. From 60 belly buttons, the team found 2,368 bacterial species, 1,458 of which may be new to science. PLOS ONE. Menstrual Cycle - Cyclic Graph Activity. Drawing Flies · Photosynthesis (or Gimme Some Sugar) The following is a comic book story about photosynthesis. 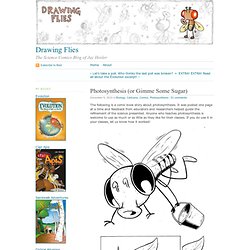 It was posted one page at a time and feedback from educators and researchers helped guide the refinement of the science presented. Anyone who teaches photosynthesis is welcome to use as much or as little as they like for their classes. If you do use it in your classes, let us know how it worked! Tree of Life Explorer. Let's Dissect Videos. Periodic Table for Biologists « i-Biology. Olympics 2012: Team GB athletes' diets interactive. Feedings need to contain fluids to rehydrate, easily digestible carbohydrates to rapidly replenish muscle glycogen, high quality protein to stimulate the repair and reconditioning of muscle fibres and finally, fresh fruit or vegetables to provide powerful vitamins and minerals that help them tolerate the stress placed upon their bodies by training. 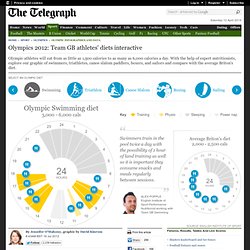 Triathlon Dr Kevin Currell, EIS Performance Nutritionist working with Team GB Triathlon: The main nutritional challenge in triathlon is taking on the volume of food needed in a limited time frame. Due to the three components of swim, bike, and run in the sport, the training load required across a week is such that athletes need to work hard to identify where they can take on the right kind of foods to ensure they are refuelled and ready for the next session. This is particularly important ahead of running sessions, where it’s important the stomach doesn’t have too much to digest making it sensitive during the run. Canoe Slalom Sailing Boxing.