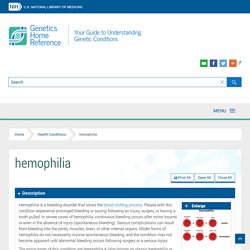 People with this condition experience prolonged bleeding or oozing following an injury, surgery, or having a tooth pulled. In severe cases of hemophilia, continuous bleeding occurs after minor trauma or even in the absence of injury (spontaneous bleeding). Serious complications can result from bleeding into the joints, muscles, brain, or other internal organs. Milder forms of hemophilia do not necessarily involve spontaneous bleeding, and the condition may not become apparent until abnormal bleeding occurs following surgery or a serious injury. Inheritance Pattern of Hemophilia - Hemophilia Federation of America. The following diagrams show how the hemophilia gene can be inherited. 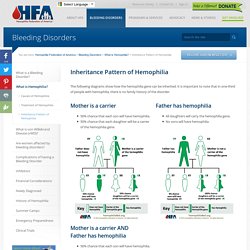 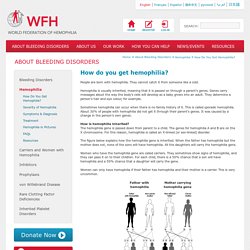 They cannot catch it from someone like a cold. Hemophilia is usually inherited, meaning that it is passed on through a parent’s genes. Genes carry messages about the way the body’s cells will develop as a baby grows into an adult. They determine a person’s hair and eye colour, for example. Genetics and inheriting haemophilia. Basic genetics We are made from billions of cells, each containing coils of DNA, which in turn hold our genetic information (the body's instruction manual). 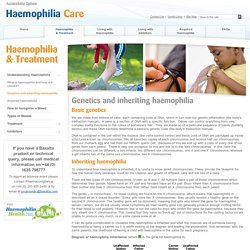 Hemophilia nhs. Useful haemophilia links. Here are some useful websites for patients and their families: hclocator.org - Enter your location to find your nearest five European Haemophilia Centres. haemophilia.org.uk - The Haemophilia Society is the only national, independent and patient led organisation for people affected by bleeding disorders. 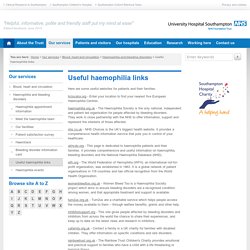 They work in close partnership with the NHS to offer information, support and represent the interests of those affected. nhs.co.uk - NHS Choices is the UK’s biggest health website. Home. Great Ormond Street Hospital. Haemophilia - Treatment. The recommended treatment plan for haemophilia depends on how severe the condition is. 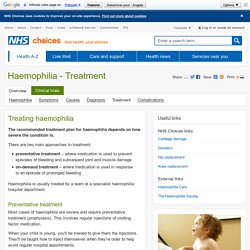 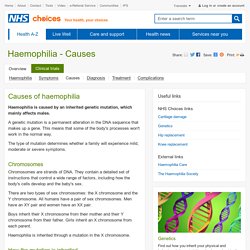 A genetic mutation is a permanent alteration in the DNA sequence that makes up a gene. This means that some of the body's processes won't work in the normal way. The type of mutation determines whether a family will experience mild, moderate or severe symptoms. Haemophilia - Symptoms. The symptoms of haemophilia vary, depending on how severe the condition is, but the main sign is prolonged bleeding. 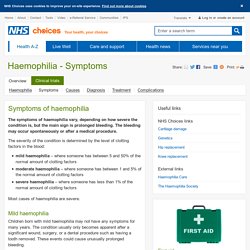 The bleeding may occur spontaneously or after a medical procedure. The severity of the condition is determined by the level of clotting factors in the blood: Haemophilia. Introduction Haemophilia is an inherited condition that affects the blood's ability to clot. 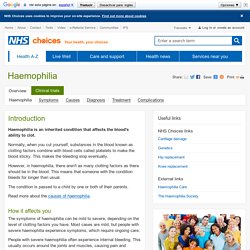 Normally, when you cut yourself, substances in the blood known as clotting factors combine with blood cells called platelets to make the blood sticky. This makes the bleeding stop eventually. However, in haemophilia, there aren't as many clotting factors as there should be in the blood. This means that someone with the condition bleeds for longer than usual. National Hemophilia Foundation. National Hemophilia Foundation. Hemophilia A, also called factor VIII (FVIII) deficiency or classic hemophilia, is a genetic disorder caused by missing or defective factor VIII, a clotting protein. 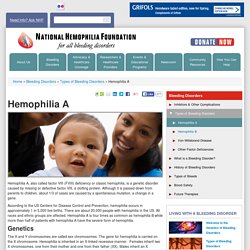 Although it is passed down from parents to children, about 1/3 of cases are caused by a spontaneous mutation, a change in a gene. According to the US Centers for Disease Control and Prevention, hemophilia occurs in approximately 1 in 5,000 live births. There are about 20,000 people with hemophilia in the US. All races and ethnic groups are affected. Haemophilia. Haemophilia (also spelled hemophilia) is a group of hereditary genetic disorders that impairs the body's ability to control blood clotting, which is used to stop bleeding when a blood vessel is broken.

Haemophilia A (clotting factor VIII deficiency) is the most common form of the disorder, present in about 1 in 5,000–10,000 male births.[1] Haemophilia B (factor IX deficiency) occurs in around 1 in about 20,000–34,000 male births. Like other recessive sex-linked, X chromosome disorders, haemophilia is more likely to occur in males than females. This is because females have two X chromosomes while males have only one, so the defective gene is guaranteed to manifest in any male who carries it. Because females have two X chromosomes and haemophilia is rare, the chance of a female having two defective copies of the gene is very remote, so females are almost exclusively asymptomatic carriers of the disorder. Signs and symptoms[edit] Characteristic symptoms vary with severity. Causes[edit] What Is Hemophilia? Hemophilia (heem-o-FILL-ee-ah) is a rare bleeding disorder in which the blood doesn't clot normally. If you have hemophilia, you may bleed for a longer time than others after an injury.

You also may bleed inside your body (internally), especially in your knees, ankles, and elbows. This bleeding can damage your organs and tissues and may be life threatening. Overview. The Blood Typing Game. Hemophilia. The Blood Typing Game - about blood groups, blood typing and blood transfusions. What happens if you get a blood transfusion with the wrong blood type?

Even though a patient's own blood type is the first choice for blood transfusions, it's not always available at the blood bank. Try to save some patients' lives and learn about human blood types! Play the Blood Typing Game About this game Embed the Blood Typing Game onto your own web site or blog Swedish version of the game 2012 Winner of the Best Game Category by Swedish Learning Awards "The winner has created a minimalistic but, at the same time, captivating graphic design which grabs the user's curiosity. Incomplete and codominance. Heredity and Punnett square. Heredity and Punnett square. Mendel and Punnett Squares RC. Punnett Square Notes. Punnett Square Notes. Vocabulary. Prophase: Definition & Stages. Cellular reproduction requires many intricate steps. In this lesson we will explore the step know as prophase to gain an understanding of what is happening inside our cells. Explore our library of over 30,000 lessons Click "next lesson" whenever you finish a lesson and quiz.

Got It You now have full access to our lessons and courses. You're 25% of the way through this course! Way to go! Congratulations on earning a badge for watching 10 videos but you've only scratched the surface. You've just earned a badge for watching 50 different lessons. GCSE Bitesize: DNA, genes and chromosomes. Cell Division - Mitosis and Meiosis. Where Do Cells Come From? 3D image of a mouse cell in the final stages of cell division (telophase). (Image by Lothar Schermelleh) Sometimes you accidentally bite your lip or skin your knee, but in a matter of days the wound heals.

Is it magic? Or, is there another explanation? Every day, every hour, every second one of the most important events in life is going on in your body—cells are dividing.