Nikon’s Small World. This infographic breaks down the top five misconceptions about evolution. 10 reasons that explain why the octopus is the most incredible creature of the sea. Your gut bacteria can reveal which diet will actually work for you. Scientists have developed a mathematical formula that can help identify which diets will best help people lose weight and reduce their risk of disease, based on the unique composition of their intestinal bacteria. 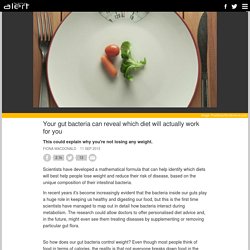 In recent years it's become increasingly evident that the bacteria inside our guts play a huge role in keeping us healthy and digesting our food, but this is the first time scientists have managed to map out in detail how bacteria interact during metabolism. The research could allow doctors to offer personalised diet advice and, in the future, might even see them treating diseases by supplementing or removing particular gut flora. So how does our gut bacteria control weight? Even though most people think of food in terms of calories, the reality is that not everyone breaks down food in the same way - which is why some people can live on cheeseburgers and lose weight, and others will eat the same diet and quickly become obese.

The Histomap of Evolution. If Pokemon Evolutions Were Realistic. Structural Eye Color is Amazing. Let’s keep this short and sweet. 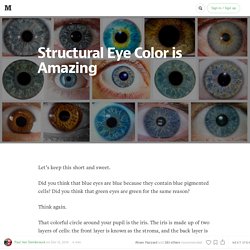 Did you think that blue eyes are blue because they contain blue pigmented cells? Did you think that green eyes are green for the same reason? Think again. Molecular Life Sciences — Top 5 misconceptions about evolution: A guide to... Why Do Our Fingers and Toes Wrinkle During a Bath? Scientists think that they have the answer to why the skin on human fingers and toes shrivels up like an old prune when we soak in the bath. 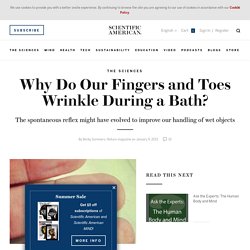 Laboratory tests confirmed a theory that wrinkly fingers improve our grip on wet or submerged objects, working to channel away the water like the rain treads in car tires. People often assume that wrinkling is the result of water passing into the outer layer of the skin and making it swell up. But researchers have known since the 1930s that the effect does not occur when there is nerve damage in the fingers. This points to the change being an involuntary reaction by the body's autonomic nervous system — the system that also controls breathing, heart rate and perspiration.

In fact, the distinctive wrinkling is caused by blood vessels constricting below the skin. Personal Genetics Education Project. We create interactive lessons for high school and college educators to engage their students in discussions of ethics and personal genetics. 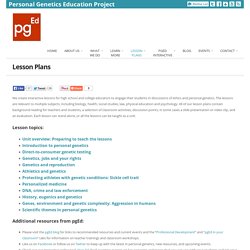 The lessons are relevant to multiple subjects, including biology, health, social studies, law, physical education and psychology. All of our lesson plans contain background reading for teachers and students, a selection of classroom activities, discussion points, in some cases a slide presentation or video clip, and an evaluation. Each lesson can stand alone, or all the lessons can be taught as a unit. Lesson topics: The Human Genome Project. In this activity, students learn about the Human Genome Project. 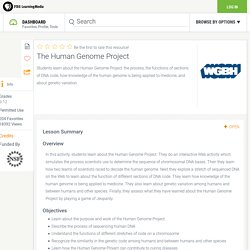 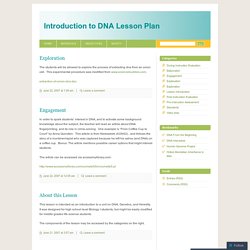 Lesson: Do It Yourself DNA. 1. 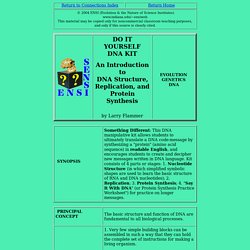 ENGAGE: Have at least one model of DNA to show, and possibly some pictures to post on your bulletin board and/or to project on your screen. Engage your students by asking what they know or have heard about DNA (and record their responses on the board). When they seem to have exhausted their combined knowledge, present some of the current and likely future benefits of our knowledge of DNA, items that they probably did not mention. Introduction To Heredity. The 2004 publication Investigating Safety: A Guide for High School Teachers by Texley et al. has raised an alarm in the teaching community about the usefulness and safety of PTC taste testing. 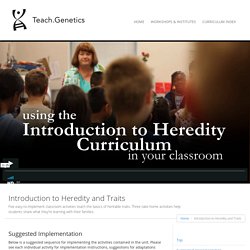 This has led to PTC being banned from many schools and districts - we believe unnecessarily. Yes, PTC is toxic. ScienceAlert. This week, 155 years ago, Charles Darwin published a book that would change science forever - On the Origin of the Species. 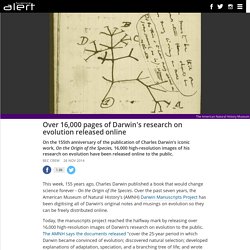 Over the past seven years, the American Museum of Natural History's (AMNH) Darwin Manuscripts Project has been digitising all of Darwin’s original notes and musings on evolution so they can be freely distributed online. Attack of the killer algae - Eric Noel Muñoz. Deer Me Lesson.pdf. Vertebrate Project - Mrs. Yoder's Class. Big Question: What is nature worth? The Habitable Planet - Ecology Lab - Overview. Environmental Science. Doctors Used to Use Live African Frogs As Pregnancy Tests. Pregnancy tests did not always come in an easy-to-use, sterile kit that provided almost immediate results. 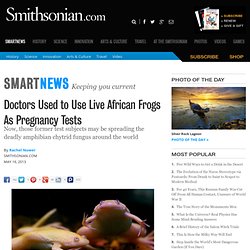 Less than a century ago, women had to rely upon frogs instead. In 1938, Dr. Edward R. Elkan wrote in the British Medical Journal: Why do shark embryos eat each other in the womb? Shark embryos habitually cannibalise their siblings in the womb until just two are left. Here’s why. Image: JoLin/Shutterstock Sand tiger sharks (Carcharias taurus) usually only give birth to two babies, but they can carry as many as 12 embryos in their womb. It was known for decades that about five months into the typical 12-month pregnancy, the largest embryo would begin to devour all but one of its littermates, but scientists couldn’t figure out why. B1a Biology PowerPoints for first few lessons - Resources.

Dr John Snow and cholera. B1a Biology PowerPoints for first few lessons - Resources. Weird mushroom-shaped animals may rewrite animal family tree. Weird deep-sea animals discovered off the coast of Australia in the 1980s have finally been classified, and they’re like no animal alive today. The newly described species, discovered between 400 and 1,000 metres below the ocean off the coast of Tasmania back in 1986, have been named Dendrogramma enigmatica and Dendrogramma discoides. And they’re so unique that they don’t fit into any existing animal groupings - in fact, they appear to most closely resemble long-extinct organisms that lived in the Ediacaran period, between 635 and 540 million years ago.

The species have been described by scientists from the University of Copenhagan in PLOS ONE this week, and their discovery could completely rewrite the bottom branches of the animal family tree. It Took Studying 25,782,500 Kids To Begin To Undo The Damage Caused By 1 Doctor. Once upon a time, a scientist named Dr. Andrew Wakefield published in the medical journal The Lancet that he had discovered a link between autism and vaccines. Thriving Garden in Sealed Bottle Hasn't Been Watered in Over 40 Years.

Related:  brains   -  things that make me go "HMMMmm I did notknow that"   -  Disease Prevention/Treatment   -  Education   -  Enterprise