The Citrus Family Tree. A version of this story appears in the February 2017 issue of National Geographic magazine. 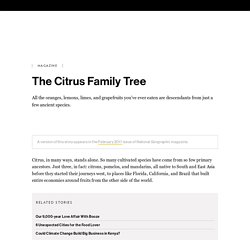 Citrus, in many ways, stands alone. So many cultivated species have come from so few primary ancestors. Just three, in fact: citrons, pomelos, and mandarins, all native to South and East Asia before they started their journeys west, to places like Florida, California, and Brazil that built entire economies around fruits from the other side of the world. Such simple lineage is the result of impressive commonality. Almost all citrus has the rare genetic combination of being sexually compatible and highly prone to mutation. No other fruit genus can boast such pedigree, and new research is bringing clarity to the origin of citrus. The scientists who study citrus love it for its appeal, its mystery, and its drama. Yet a fruit group of such illustrious history won't be exterminated so easily. Fasciation. Wyethia helianthoides or Mule's Ear Wildflower (on right) showing fasciation A "crested" Saguaro cactus (Carnegiea), resulting from fasciation, located at Saguaro National Park (West), Arizona, U.S. 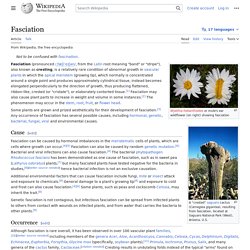 Fasciation (pronounced /ˌfæʃiˈeɪʃən/, from the Latin root meaning "band" or "stripe"), also known as cresting, is a relatively rare condition of abnormal growth in vascular plants in which the apical meristem (growing tip), which normally is concentrated around a single point and produces approximately cylindrical tissue, instead becomes elongated perpendicularly to the direction of growth, thus, producing flattened, ribbon-like, crested, or elaborately contorted tissue.[1] Fasciation may also cause plant parts to increase in weight and volume in some instances.[2] The phenomenon may occur in the stem, root, fruit, or flower head. 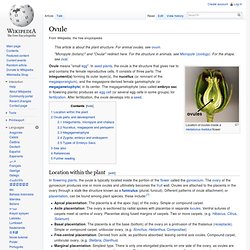 In seed plants, the ovule is the structure that gives rise to and contains the female reproductive cells. It consists of three parts: The integument(s) forming its outer layer(s), the nucellus (or remnant of the megasporangium), and the megaspore-derived female gametophyte (or megagametophyte) in its center. The megagametophyte (also called embryo sac in flowering plants) produces an egg cell (or several egg cells in some groups) for fertilization. After fertilization, the ovule develops into a seed. Moss capsules and their spores. Sometimes when you look closely at a moss, instead of the usual velvety green, you can see little stalks poking up with what look like wind socks or tiny turnips on the end. 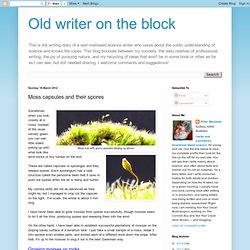 These are called capsules or sporangia, and they release spores. Each sporangium has a neat structure called the peristome teeth that it uses to push out spores when the air is damp and humid. My camera skills are not as advanced as they might be, but I managed to crop out the capsule on the right. For scale, the whole is about 3 mm long. I have never been able to grow mosses from spores successfully, though mosses seem to do it all the time, producing spores and releasing them into the wind. On the other hand, I have been able to establish successful plantations of mosses on the sloping sandy surface of a terrarium tank. Most moss-growing seems to be done by obsessive gardeners who want an antique look on statues or stonework. Anyhow, the experts say to take some healthy moss and crumble it into your blender. Gemmae. Moss Peristomes. 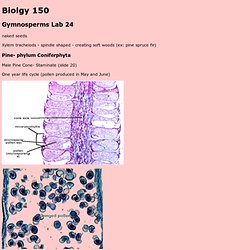 Rhizoid. Plants originated in water, from where they gradually migrated to land during their long course of evolution. 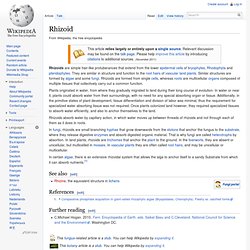 In water or near it, plants could absorb water from their surroundings, with no need for any special absorbing organ or tissue. Additionally, in the primitive states of plant development, tissue differentiation and division of labor was minimal, thus the requirement for specialized water absorbing tissue was not required. Once plants colonized land however, they required specialized tissues to absorb water efficiently, and also to anchor themselves to the land. Rhizoids absorb water by capillary action, in which water moves up between threads of rhizoids and not through each of them as it does in roots. In certain algae, there is an extensive rhizoidal system that allows the alga to anchor itself to a sandy Substrate from which it can absorb nutrients.[1] See also[edit] Rhizine, the equivalent structure in lichens References[edit] Further reading[edit] C.Michael Hogan. 2010. Root. Primary and secondary roots in a cotton plant Large, mature tree roots above the soil Anatomy[edit] Root growth[edit] Roots of trees Early root growth is one of the functions of the apical meristem located near the tip of the root. 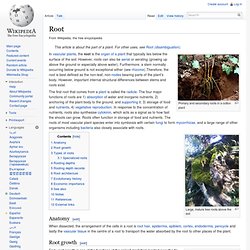