How Fungi Saved the World — Feed the data monster. By the dawn of the Carboniferous period, plants developed a new kind of support material, called lignin. 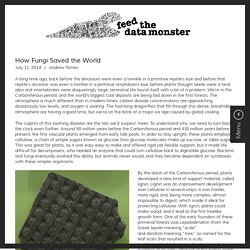 Lignin was an improvement development over cellulose in several ways: it was harder, more rigid, and, being more complex, almost impossible to digest, which made it ideal for protecting cellulose. With lignin, plants could make wood, and it lead to the first treelike growth form. One of the early founders of these primeval forests was Lepidodendron (from the Greek lepido meaning “scale” and dendron meaning “tree,” so named for the leaf scars that resulted in a scaly trunk). Lepidodendron wasn't a true tree but a member of an early offshoot of the higher plants known as lycopods, today comprised of the much smaller club mosses and quillworts.

Based on reconstructions of the fossils, it is estimated that Lepidodendron stood a stately 100 feet tall, putting it at the very top range of the early flora and head and shoulders above many trees that exist today. Basidiocarp with gills lining the underside. Fungi. Useful Reading Campbell, Biology 6th Ed - Chapter 31, pgs 616-632Campbell, Biology 7th Ed - Chapter 31, pgs 608-625 Vocabulary Hyphae – long filaments in the body of a fungus. 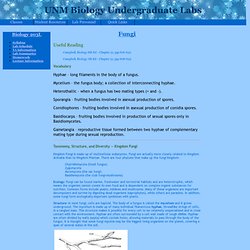 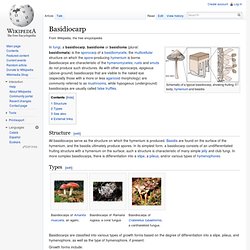 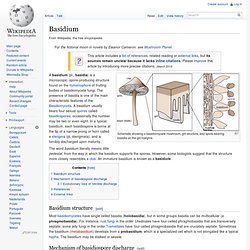 A basidium (pl., basidia) is a microscopic, spore-producing structure found on the hymenophore of fruiting bodies of basidiomycete fungi. The presence of basidia is one of the main characteristic features of the Basidiomycota. A basidium usually bears four sexual spores called basidiospores; occasionally the number may be two or even eight. In a typical basidium, each basidiospore is borne at the tip of a narrow prong or horn called a sterigma (pl. sterigmata), and is forcibly discharged upon maturity. 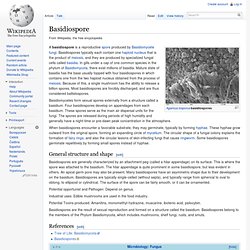 Four basidiospores develop on appendages from each basidium. Conidium. Conidia on conidiophores Conidia, sometimes termed asexual chlamydospores, or chlamydoconida [1] are asexual,[2] non-motile spores of a fungus and are named after the Greek word for dust, skoni. 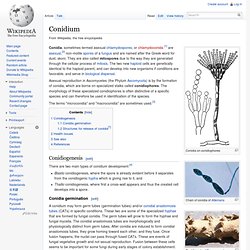 They are also called mitospores due to the way they are generated through the cellular process of mitosis. The two new haploid cells are genetically identical to the haploid parent, and can develop into new organisms if conditions are favorable, and serve in biological dispersal. Conidia spores. 20 Pictures of Mushrooms That are Scary Cool. My mother always told me I was a fun guy, I guess she was right! 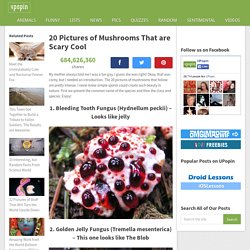 Okay, that was corny, but I needed an introduction. The 20 pictures of mushrooms that follow are pretty intense. I never knew simple spores could create such beauty in nature. First we present the common name of the species and then the class and species. Enjoy! 1. 2. 3. 4. 5. 6. 7. 8. 9. Sporangia & Zygosporangia. Home >> What fungi are >> How fungi reproduce >> Sexual reproduction >> Sporangia Among the true fungi only the Chytridiomycota and Zygomycota reproduce sexually by means of sporangia. 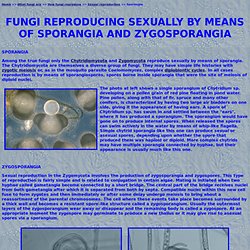 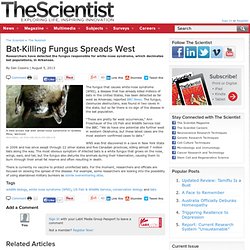 A little brown bat with white-nose syndrome in Greeley Mine, VermontWIKIMEDIA, US FISH AND WILFLIFE SERVICEThe fungus that causes white-nose syndrome (WNS), a disease that has already killed millions of bats in the United States, has been detected as far west as Arkansas, reported BBC News. The fungus, Geomyces destructans, was found in two caves in the state, but so far there is no sign of the disease in the bat population.

“These are pretty far west occurrences,” Ann Froschauer of the US Fish and Wildlife Service told the BBC. “We do have one potential site further west in western Oklahoma, but these latest cases are the most western confirmed cases to date.” WNS was first discovered in a cave in New York State in 2006 and has since swept through 22 other states and five Canadian provinces, killing almost 7 million bats along the way. Chytrid Fungus - The Frog Killer. Algae + Fungi = Symbiotic Lichen. Rainy season brings glow-in-the-dark mushrooms. 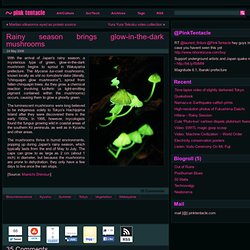