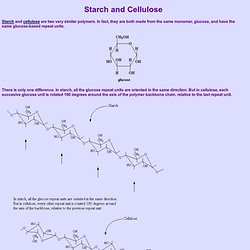 In fact, they are both made from the same monomer, glucose, and have the same glucose-based repeat units. There is only one difference. In starch, all the glucose repeat units are oriented in the same direction. But in cellulose, each succesive glucose unit is rotated 180 degrees around the axis of the polymer backbone chain, relative to the last repeat unit. When bigshot scientists are talking bigshot scientist talk they say that the glucose units in starch are connected by alpha linkages, and that the glucose units in cellulose are connected by beta linkages. Does this make any difference? Feedback Inhibition of Biochemical Pathways. 10 Steps of Glycolysis. Glycolysis literally means "splitting sugars. 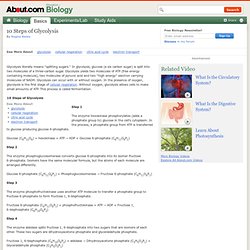 " In glycolysis, glucose (a six carbon sugar) is split into two molecules of a three-carbon sugar. Glycolysis yields two molecules of ATP (free energy containing molecule), two molecules of pyruvic acid and two "high energy" electron carrying molecules of NADH. Glycolysis can occur with or without oxygen. In the presence of oxygen, glycolysis is the first stage of cellular respiration. Without oxygen, glycolysis allows cells to make small amounts of ATP. 10 Steps of Glycolysis Step 1 The enzyme hexokinase phosphorylates (adds a phosphate group to) glucose in the cell's cytoplasm. Bacterial phagocytosis by macrophage. Meiosis. History of malaria. The most critical factors in the spread or eradication of disease have been human behavior (shifting population centers, changing farming methods and the like) and living standards. 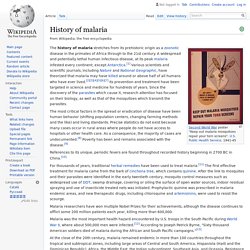 Precise statistics do not exist because many cases occur in rural areas where people do not have access to hospitals or other health care. As a consequence, the majority of cases are undocumented.[8] Poverty has been and remains associated with the disease.[9] References to its unique, periodic fevers are found throughout recorded history beginning in 2700 BC in China.[10] For thousands of years, traditional herbal remedies have been used to treat malaria.[11] The first effective treatment for malaria came from the bark of cinchona tree, which contains quinine. Malaria researchers have won multiple Nobel Prizes for their achievements, although the disease continues to afflict some 200 million patients each year, killing more than 600,000. 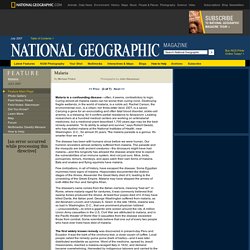 Curing almost all malaria cases can be worse than curing none. Destroying fragile wetlands, in the world of malaria, is a noble act. Rachel Carson, the environmental icon, is a villain; her three-letter devil, DDT, is a savior. Carrying a gene for an excruciating and often fatal blood disorder, sickle-cell anemia, is a blessing, for it confers partial resistance to falciparum. Leading researchers at a hundred medical centers are working on antimalarial medicines, but a medicinal plant described 1,700 years ago may be the best remedy available. The disease has been with humans since before we were human.

Unique Features of Meiosis. Spermatogenesis: The Creation of Sperm. Sodium-Potassium Exchange Pump. DNA Replication. Synthesis of DNA. There is a major difference between DNA polymerase and RNA polymerase: the RNA polymerase can synthesize a new strand whereas the DNA polymerase can only extend an existing strand. Therefore, to synthesize a DNA molecule, a short RNA molecule (~ 5 - 12 nucleotides) must be synthesize first by a special enzyme. The initiating RNA molecule is known as a primer, and the enzyme is called primase. In addition to DNA polymerase and primase, DNA replication requires helicase and single strand binding protein (SSB protein). The role of helicase is to unwind the duplex DNA. SSB proteins can bind to both separated strands, preventing them from annealing (reconstitution of double-stranded DNA from single strands).

The replication mechanisms in both bacteria and eukaryotes are similar. Figure 7-B-2. DNA polymerases can extend nucleic acid strands only in the 5' to 3' direction. Figure 7-B-3. The whole lagging strand is synthesized by repeating steps (b) to (e). The Cell Cycle & Mitosis Tutorial. Plant vs. Animal Cell. How Facilitated Diffusion Works. Anthrax sickens 13 in western Siberia, and a thawed-out reindeer corpse may be to blame. Reindeer in the Russian peninsula of Yamal. 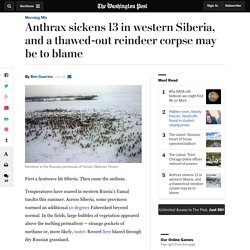 (Siberian Times) First a heatwave hit Siberia. Then came the anthrax. Temperatures have soared in western Russia’s Yamal tundra this summer. Across Siberia, some provinces warmed an additional 10 degrees Fahrenheit beyond normal. Endocytosis & Exocytosis. The Dynamic Cell Membrane. Anaerobic Bacteria List. Anaerobic bacteria are organisms that are capable of surviving and growing in an atmosphere of little or no oxygen. 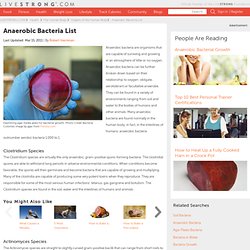 Anaerobic bacteria can be further broken down based on their relationship to oxygen: obligate, aerotolerant or facultative anaerobe. They can be found in a variety of environments ranging from soil and water to the bodies of humans and other animals. Many anaerobic bacteria are found normally in the human body; in fact, in the intestines of humans, anaerobic bacteria outnumber aerobic bacteria 1,000 to 1. The Clostridium species are virtually the only anaerobic, gram-positive spore-forming bacteria. The clostridial spores are able to withstand long periods in adverse environmental conditions. The Actinomyces species are straight to slightly curved gram-positive bacilli that can range from short rods to long, branching rods.