Four-Stranded DNA Makes Human Debut. Every Cell in Your Body Has the Same DNA. Except It Doesn’t. Cliques of Neurons Bound into Cavities Provide a Missing Link between Structure and Function. 1. 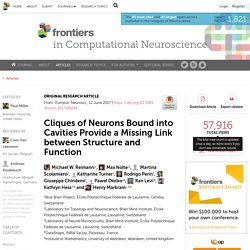 Introduction How the structure of a network determines its function is not well understood. For neural networks specifically, we lack a unifying mathematical framework to unambiguously describe the emergent behavior of the network in terms of its underlying structure (Bassett and Sporns, 2017). While graph theory has been used to analyze network topology with some success (Bullmore and Sporns, 2009), current methods are usually constrained to analyzing how local connectivity influences local activity (Pajevic and Plenz, 2012; Chambers and MacLean, 2016) or global network dynamics (Hu et al., 2014), or how global network properties like connectivity and balance of excitatory and inhibitory neurons influence network dynamics (Renart et al., 2010; Rosenbaum et al., 2017). One such global network property is small-worldness. 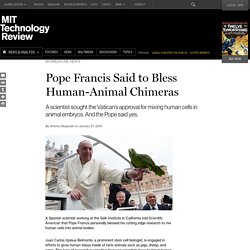 Juan Carlos Izpisua Belmonte, a prominent stem cell biologist, is engaged in efforts to grow human tissue inside of farm animals such as pigs, sheep, and cows. This type of research is sensitive because scientists have to inject human stem cells into early-stage animal embryos, then try to grow the mixtures inside surrogate animals. Much of Belmonte’s work occurs in collaboration with a team in the province of Murcia in his native Spain, a sausage and ham loving country which is about 77% Catholic. “Spain is a very Catholic country, so we had to go through the Pope. He very nicely said yes.” The Pontifical Academy of Sciences, the Vatican’s scientific body, did not respond to an email seeking to confirm Pope Francis’ position. A Brave (or Scary?) New World: Gene Editing Tool CRISPR Takes World of Medicine by Storm. Research team edits the DNA of fertilized human embryos. For several weeks, rumors have been circulating that a research group in China had performed the first targeted editing of DNA in human embryos. 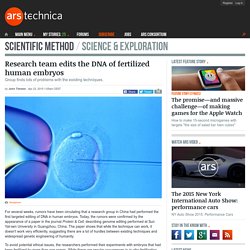 Today, the rumors were confirmed by the appearance of a paper in the journal Protein & Cell, describing genome editing performed at Sun Yat-sen University in Guangzhou, China. The paper shows that while the technique can work, it doesn't work very efficiently, suggesting there are a lot of hurdles between existing techniques and widespread genetic engineering of humanity. To avoid potential ethical issues, the researchers performed their experiments with embryos that had been fertilized by more than one sperm. Shattered chromosome cures woman of immune disease. Call it a scientific oddity—or a medical miracle. 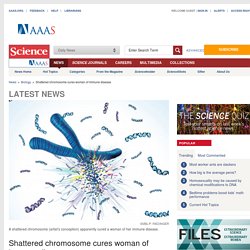 A girl who grew up with a serious genetic immune disease was apparently cured in her 30s by one of her chromosomes shattering into pieces and reassembling. Scientists traced the woman’s improvement to the removal of a harmful gene through this scrambling of DNA in one of her blood stem cells—a recently identified phenomenon that until now had only been linked to cancer. The woman, who lives in Cincinnati, Ohio, suffered from recurring bacterial infections as a child. Back then, doctors found that she had abnormally low levels of certain white blood cells needed to fight invading microbes. Have We Found Alien Life? Home : Wyss Institute at Harvard. 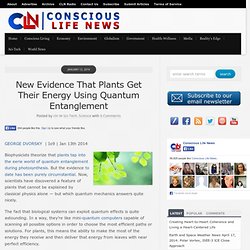 But the evidence to date has been purely circumstantial. Now, scientists have discovered a feature of plants that cannot be explained by classical physics alone — but which quantum mechanics answers quite nicely. The fact that biological systems can exploit quantum effects is quite astounding. Biochemists resurrect 'molecular fossils': Findings challenge assumptions about origins of life. Before there was life on Earth, there were molecules. 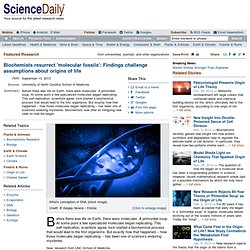 A primordial soup. At some point a few specialized molecules began replicating. This self-replication, scientists agree, kick-started a biochemical process that would lead to the first organisms. All humans may be ‘Martians’: Growing evidence that all life on Earth came ‘on a rock’ from Mars. AP Photo/NASALife could have developed on Mars, not Earth, a scientist says. 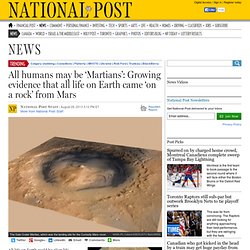 All life on Earth could be alien life. So says professor Steven Benner, who has presented a thesis that life in our solar system may have developed not on our blue planet, but on Mars. “The evidence seems to be building that we are actually all Martians; that life started on Mars and came to Earth on a rock,” he told the BBC. The surprising idea was presented by Benner — from the Westheimer Institute for Science and Technology in Gainesville, Florida — at the Goldschmidt conference in Florence. National Post GraphicsClick to enlarge this graphic showing all of the missions from Earth to Mars Benner argues that life needs very specific conditions to develop. Scientists ‘could grow new bone using vibrations’ - Health. SCIENTISTS may be able to grow new bone by using high frequency vibrations to kick-start stem cells, a Scottish study suggests. 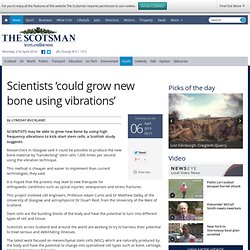 Researchers in Glasgow said it could be possible to produce the new bone material by “nanokicking” stem cells 1,000 times per second using the vibration technique. This method is cheaper and easier to implement than current technologies, they said. It is hoped that the process may lead to new therapies for orthopaedic conditions such as spinal injuries, osteoporosis and stress fractures. This project involved cell engineers, Professor Adam Curtis and Dr Matthew Dalby, of the University of Glasgow, and astrophysicist Dr Stuart Reid, from the University of the West of Scotland. Stem cells are the building blocks of the body and have the potential to turn into different types of cell and tissue. Teenager astounds scientists by building a DNA testing machine in his bedroom - and he did it to discover why his brother is ginger. Fred Turner, 17, from Yorkshire built a DNA testing machine in his bedroomBuilt the polymerase chain reaction machine from items he found at homeWanted to see if his brother had the mutated gene that causes ginger hairExperiment was a success and proved why his brother is ginger and he isn'tFred was named the UK's Young Engineer of the Year for his design By Emma Innes Published: 10:16 GMT, 5 April 2013 | Updated: 22:42 GMT, 5 April 2013 With Fred's straight brown hair and Gus's curly ginger mane, the teasing the Turner brothers got from their friends was rather predictable. 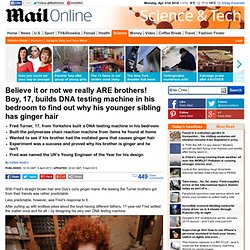