An Inuk hunter's shocking discovery: A 1-headed, 2-bodied seal fetus - North. Aibillie Elijassiapik was out hunting seals near Inukjuak, Que., when he noticed his catch had an abnormally protruding belly. 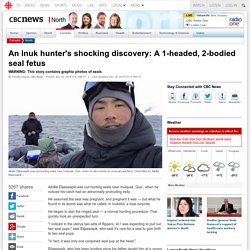 He assumed the seal was pregnant, and pregnant it was — but what he found in its womb was what he called, in Inuktitut, a total surprise. He began to skin the ringed seal — a normal hunting procedure. That quickly took an unexpected turn. Greenland sharks may live 400 years, scientists say - North. Step aside Galapagos tortoises, the Greenland shark may be the longest-living vertebrate on Earth with a 400-year lifespan, a new study suggests. 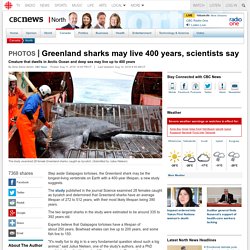 The study published in the journal Science examined 28 females caught as bycatch and determined that Greenland sharks have an average lifespan of 272 to 512 years, with their most likely lifespan being 390 years. The two largest sharks in the study were estimated to be around 335 to 392 years old. Experts believe that Galapagos tortoises have a lifespan of about 250 years.

Bowhead whales can live up to 200 years, and some fish live to 150. "It's really fun to dig in to a very fundamental question about such a big animal," said Julius Nielsen, one of the study's authors, and a PhD candidate from the University of Copenhagen in Denmark. The Mind of an Octopus. Adapted from Other Minds: The Octopus, the Sea and the Deep Origins of Consciousness, by Peter Godfrey-Smith. 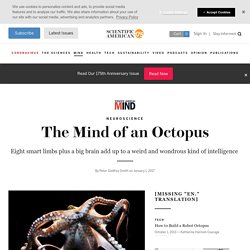 Copyright © 2016 by Peter Godfrey-Smith. Published by arrangement with Farrar, Straus and Giroux, LLC (U.S.), HarperCollins (U.K.) Someone is watching you, intently, but you can't see them. Then you notice, drawn somehow by their eyes. Surgeon plans first human head transplant in 2017 - ExtremeTech. Modern medical technology has granted doctors the ability to transplant many of the body’s organs, extending the life of people suffering from chronic diseases. 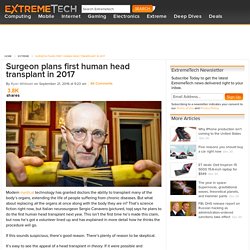 Self-Farming Robot controlled by an app. From Theranos to Space Waves, These Were the 9 Biggest Science Stories of 2016. At Least in Human Cells and Live Mice. New research suggests it is possible to slow or even reverse aging, at least in mice, by undoing changes in gene activity—the same kinds of changes that are caused by decades of life in humans. 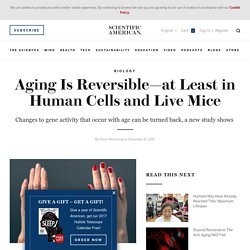 By tweaking genes that turn adult cells back into embryoniclike ones, researchers at the Salk Institute for Biological Studies reversed the aging of mouse and human cells in vitro, extended the life of a mouse with an accelerated-aging condition and successfully promoted recovery from an injury in a middle-aged mouse, according to a study published Thursday in Cell. The study adds weight to the scientific argument that aging is largely a process of so-called epigenetic changes, alterations that make genes more active or less so. Silkworms Spin Super-Silk after Eating Carbon Nanotubes and Graphene. Silk—the stuff of lustrous, glamorous clothing—is very strong. 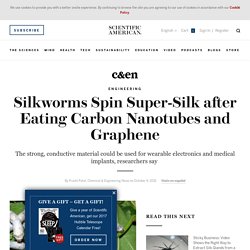 Researchers now report a clever way to make the gossamer threads even stronger and tougher: by feeding silkworms graphene or single-walled carbon nanotubes (Nano Lett. 2016, DOI: 10.1021/acs.nanolett.6b03597). The reinforced silk produced by the silkworms could be used in applications such as durable protective fabrics, biodegradable medical implants, and ecofriendly wearable electronics, they say. Researchers have previously added dyes, antimicrobial agents, conductive polymers, and nanoparticles to silk—either by treating spun silk with the additives or, in some cases, by directly feeding the additives to silkworms. What the dog smelled: The science and mystery of cadaver dogs. Dive teams spent 12 days searching the waters of Elliot Lake in northern Ontario and didn't find a thing. 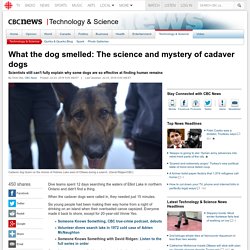 When the cadaver dogs were called in, they needed just 15 minutes. 23andMe Is Terrifying, but Not for the Reasons the FDA Thinks. SA Forum is an invited essay from experts on topical issues in science and technology. 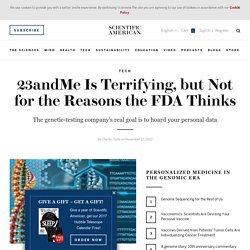 If there’s a gene for hubris, the 23andMe crew has certainly got it. Last Friday the U.S. Food and Drug Administration (FDA) ordered the genetic-testing company immediately to stop selling its flagship product, its $99 “Personal Genome Service” kit. In response, the company cooed that its “relationship with the FDA is extremely important to us” and continued hawking its wares as if nothing had happened. Although the agency is right to sound a warning about 23andMe, it’s doing so for the wrong reasons.

Since late 2007, 23andMe has been known for offering cut-rate genetic testing. At first, 23andMe seemed to angle its kit as a fun way to learn a little genetics using yourself as a test subject. Sea sapphire disappears: How the ocean animal vanishes (VIDEO). Did Humans Evolve to See Things as They Really Are? One of the deepest problems in epistemology is how we know the nature of reality. 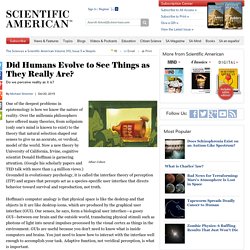 Over the millennia philosophers have offered many theories, from solipsism (only one's mind is known to exist) to the theory that natural selection shaped our senses to give us an accurate, or verdical, model of the world. Now a new theory by University of California, Irvine, cognitive scientist Donald Hoffman is garnering attention. (Google his scholarly papers and TED talk with more than 1.4 million views.) Grounded in evolutionary psychology, it is called the interface theory of perception (ITP) and argues that percepts act as a species-specific user interface that directs behavior toward survival and reproduction, not truth. Hoffman's computer analogy is that physical space is like the desktop and that objects in it are like desktop icons, which are produced by the graphical user interface (GUI). A Researcher Made an Organic Computer Using Four Wired-Together Rat Brains. 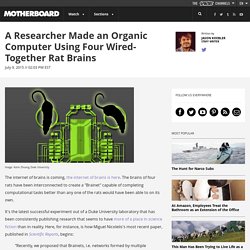 The brains of four rats have been interconnected to create a "Brainet" capable of completing computational tasks better than any one of the rats would have been able to on its own. It's the latest successful experiment out of a Duke University laboratory that has been consistently publishing research that seems to have more of a place in science fiction than in reality. Here, for instance, is how Miguel Nicolelis's most recent paper, published in Scientific Reports, begins: "Recently, we proposed that Brainets, i.e. networks formed by multiple animal brains, cooperating and exchanging information in real time through direct brain-to-brain interfaces, could provide the core of a new type of computing device: an organic computer.

Lenin's Body Improves with Age. For thousands of years humans have used embalming methods to preserve dead bodies. But nothing compares with Russia's 90-year-old experiment to preserve the body of Vladimir Lenin, communist revolutionary and founder of the Soviet Union. Generations of Russian scientists have spent almost a century fine-tuning preservation techniques that have maintained the look, feel and flexibility of Lenin's body. This year Russian officials closed the Lenin Mausoleum in Moscow's Red Square so that scientists could prepare the body for public display again in time for the Soviet leader's 145th birthday anniversary today.

The job of maintaining Lenin's corpse belongs to an institute known in post-Soviet times as the Center for Scientiﬁc Research and Teaching Methods in Biochemical Technologies in Moscow. WebMD’s Future of Health with Robin Roberts: Advances in Treating Blindness, Obesity, Infertility, and More. When cancer researcher Rosalie Sears, PhD, clicks the print button, ink does not spray onto a page.

Instead, actual human cells issue from different heads of her 3-D printer. In a short while, she has before her a very small tumor -- an exact replica of a patient's cancerous growth. At that point, she and her colleagues can attack the printed copy with any number of cancer treatments. Human Genome's Spirals, Loops and Globules Come into 4-D View [Video] From Quanta Magazine (find original story here).

The nuclei from a half-million human cells could all fit inside a single poppy seed. Yet within each and every nucleus resides genomic machinery that is incredibly vast, at least from a molecular point of view. It has billions of parts, many used to activate and silence genes—an arrangement that allows individual cells to specialize as brain cells, heart cells and some 200 other different cell types. What’s more, each cell’s genome is atwitter with millions of mobile pieces that swarm throughout the nucleus and latch on here and there to tweak the genetic program.

Every so often, the genomic machine replicates itself. At the heart of the human genome’s Lilliputian machinery is the two meters’ worth of DNA that it takes to embody a person’s 3 billion genetic letters, or nucleotides. Tongue Shocks Hasten Healing. A little-known fact: the tongue is directly connected to the brain stem. This anatomical feature is now being harnessed by scientists to improve rehabilitation.

A team at the University of Wisconsin–Madison recently found that electrically stimulating the tongue can help patients with multiple sclerosis (MS) improve their gait. MS is an incurable disease in which the insulation around the nerves becomes damaged, disrupting the communication between body and brain. One symptom is loss of muscle control. In a study published in the Journal of Neuro-Engineering and Rehabilitation, Wisconsin neuroscientist Yuri Danilov and his team applied painless electrical impulses to the tip of the tongue of MS patients during physical therapy.

The Science of Death and Zombies. Understand the Measles Outbreak with this One Weird Number. The views expressed are those of the author and are not necessarily those of Scientific American. A man sneezes, possibly transmitting measles or other airborne diseases. Image: James Gathany, CDC. 15. What Aliens Look Like. Human Eye Sometimes Sees the Unseeable. Sometimes it’s hard to see the light. Especially if it lies outside the visible spectrum, like x-rays or ultraviolet radiation.

Vanishing twin. Welcome to the BDDC. The sheepshead fish has human teeth, but it’s okay because it won’t give you a psychedelic crisis. The views expressed are those of the author and are not necessarily those of Scientific American. Credit: VA Institute of Marine Science (VIMS) Strange but True: The Largest Organism on Earth Is a Fungus. 12 'Mutant' Animals. Animals with Extra Parts. By Kelli BenderApr 18, 2012.

Cadavers and Curios from the Dawn of Modern Medicine [Slide Show] Email Dr. New "Dreadnought" Dinosaur Most Complete Specimen of a Giant. Biologypop- All about Biology. Artificial spleen cleans up blood. Harvard’s Wyss Institute Magnetic nanobeads in the 'biospleen' device bind to Escherichia coli (left) and Staphylococcus aureus (right) and remove them from blood. Researchers have developed a high-tech method to rid the body of infections — even those caused by unknown pathogens. A device inspired by the spleen can quickly clean blood of everything from Escherichia coli to Ebola, researchers report on 14 September in Nature Medicine1.

Blood infections can be very difficult to treat, and can lead to sepsis, an often-fatal immune response.