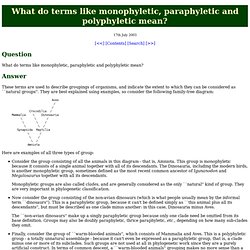 Answer These terms are used to describe groupings of organisms, and indicate the extent to which they can be considered as ``natural groups''. They are best explained using examples, so consider the following family-tree diagram: Aves / / Crocodilia / Mammalia \ Dinosauria \ \ / \ \ / \ \ / Synapsida Reptilia \ / \ / \ / Amniota Here are examples of all three types of group: Consider the group consisting of all the animals in this diagram - that is, Amniota. So far, so straightforward. Biology: Free Stanford Course by Robert Sapolsky. Genetic drift v. Natural selection. Genetic drift or allelic drift is the change in the frequency of a gene variant (allele) in a population due to random sampling.[1] The alleles in the offspring are a sample of those in the parents, and chance has a role in determining whether a given individual survives and reproduces. 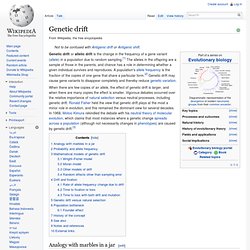 A population's allele frequency is the fraction of the copies of one gene that share a particular form.[2] Genetic drift may cause gene variants to disappear completely and thereby reduce genetic variation. Analogy with marbles in a jar[edit] The process of genetic drift can be illustrated using 20 marbles in a jar to represent 20 organisms in a population.[4] Consider this jar of marbles as the starting population. Half of the marbles in the jar are red and half blue, and both colors correspond to two different alleles of one gene in the population.

In each new generation the organisms reproduce at random. Probability and allele frequency[edit] The probability of any one possible combination is where. Homologous v Analogous Structures. Analogous structure (wings in insects and tetrapods) Introductory Biology. Convergent Evolution. Convergent evolution describes the independent evolution of similar features in species of different lineages. 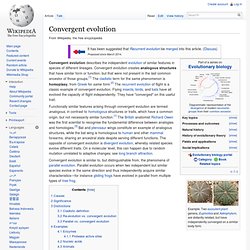 Convergent evolution creates analogous structures that have similar form or function, but that were not present in the last common ancestor of those groups.[1] The cladistic term for the same phenomenon is homoplasy, from Greek for same form.[2] The recurrent evolution of flight is a classic example of convergent evolution. Flying insects, birds, and bats have all evolved the capacity of flight independently. They have "converged" on this useful trait. Convergent evolution is similar to, but distinguishable from, the phenomena of parallel evolution. Parallel evolution occurs when two independent but similar species evolve in the same direction and thus independently acquire similar characteristics—for instance gliding frogs have evolved in parallel from multiple types of tree frog. 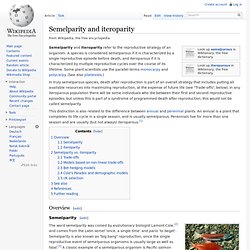 A species is considered semelparous if it is characterized by a single reproductive episode before death, and iteroparous if it is characterized by multiple reproductive cycles over the course of its lifetime. Some plant scientists use the parallel terms monocarpy and polycarpy. (See also plietesials.) In truly semelparous species, death after reproduction is part of an overall strategy that includes putting all available resources into maximizing reproduction, at the expense of future life (see "Trade-offs", below). In any iteroparous population there will be some individuals who die between their first and second reproductive episodes, but unless this is part of a syndrome of programmed death after reproduction, this would not be called semelparity. This distinction is also related to the difference between annual and perennial plants. Overview[edit] Semelparity[edit] Camoflauge in Animals. Mimicry Some animals and plants look like other things -- they mimic them.

Mimicry is another type of deceptive coloration.