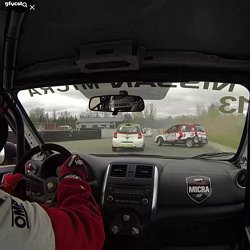 TALKING BACKWARDS (Backwards Banter Brain Testing) - Smarter Every Day 168. Monster Truck Frontflip - Mad Scientist Lee O'Donnell Freestyle CHAMPION. Bioluminescent Algae. Kayaker swimming with orca. Make the turn like a boss - Incredible Drift. MMA DOUBLE KNOCKOUT Axel Cazares vs Alan Vasquez. Guillaume Nery base jumping at Dean's Blue Hole, filmed on breath hold by Julie Gautier. What Grizzly bear paw look like. What happens when you live in Alaska and forget your phone in the car. Crazy moves. Semi Truck hits bridge, snow crash. My parents haven't spoken to each other in over 10 YEARS ･10年以上父と母しゃべってなかった. The Man Who Swims With Crocodiles. Dad reflex of a bike mechanic saved not only 1 but 2 children! - GIF on Imgur. Falling with style. Dubai: Then and Now. Sir Mick Jagger becomes dad for the eighth time aged 73. 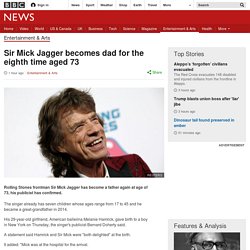 The singer already has seven children whose ages range from 17 to 45 and he became a great-grandfather in 2014. His 29-year-old girlfriend, American ballerina Melanie Hamrick, gave birth to a boy in New York on Thursday, the singer's publicist Bernard Doherty said. A statement said Hamrick and Sir Mick were "both delighted" at the birth. It added: "Mick was at the hospital for the arrival. "Mother and baby are doing well and we request that the media respect their privacy at this time. " Image copyright Dimitrios Kambouris Sir Mick began dating Hamrick after the suicide of L'Wren Scott in 2014, his partner of 13 years. The music star had his other children with Marsha Hunt, Bianca Jagger, Jerry Hall and Luciana Gimenez Morad. The Rolling Stones recently released a new blues album called Blue & Lonesome.

Mobsters ran a fake U.S. Embassy in Ghana for 10 years, flying the flag and issuing visas for $6,000. The building in Accra, Ghana, where an organized crime ring flew an American flag, hung a photo of President Obama and claimed it was the real U.S. 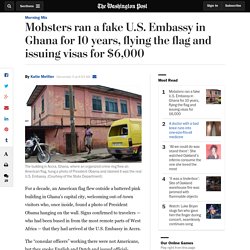 Embassy. (Courtesy of the State Department) For a decade, an American flag flew outside a battered pink building in Ghana’s capital city, welcoming out-of-town visitors who, once inside, found a photo of President Obama hanging on the wall. Signs confirmed to travelers — who had been bused in from the most remote parts of West Africa — that they had arrived at the U.S. Embassy in Accra. The “consular officers” working there were not Americans, but they spoke English and Dutch and issued official-looking visas and identification papers. Smooth Parking. Salmon swimming across the road. That was really close. About What's New Tools Privacy Terms Sign Up via Clipper 867,368 Embed More. 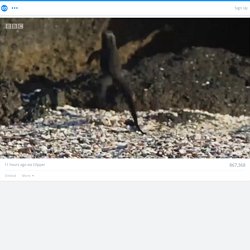 Bruce Lee and his Wing Chun master Ip Man. Double bottle flip. Can Paper Cut Wood? Amazing flips. Guy jumps from 25,000 ft. lands on a net. No parachute deployed. BMX 1080 frontflip. Honey Guide Bird amazing BBC Documentary by jaandil7 YouTube. The Mind-Blowing Way These Tribesmen and Wild Birds Work Together. Calling to each other with chirps and yelps, a species of bird and a tribe of humans in southeast Africa forage for honey in unison. 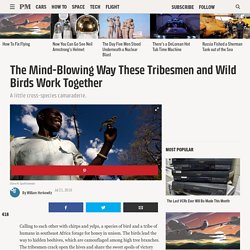 The birds lead the way to hidden beehives, which are camouflaged among high tree branches. The tribesmen crack open the hives and share the sweet spoils of victory with their bird friends. For ages people have trained dogs, birds, horses, and other creatures to help us out in various ways. But this is a rare tale of conscious teamwork between humans and wild animals. Advertisement - Continue Reading Below A male greater honeyguide in the Niassa National Reserve. Claire N. A trio of zoologists led by Claire Spottiswoode, an African bird researcher at the University of Cambridge in the UK, has just documented this astounding relationship. "What's remarkable about the honeyguide-human relationship is that it involves free-living wild animals... Cross-Species Camaraderie The researchers set up a simple experiment. Part of the honey harvest from a wild bees' nest. Dotted-line Pen. The most awesome images on the Internet. This just looks impossible, even in slow-mo. Half the population of Iceland chanting.