A Globe, Clothing Itself with a Brain. An obscure Jesuit priest, Pierre Teilhard de Chardin,set down the philosophical framework for planetary, Net-based consciousness 50 years ago. 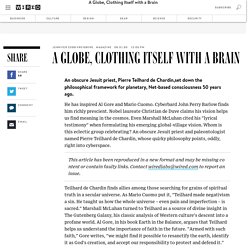 He has inspired Al Gore and Mario Cuomo. Cyberbard John Perry Barlow finds him richly prescient. Nobel laureate Christian de Duve claims his vision helps us find meaning in the cosmos. Even Marshall McLuhan cited his "lyrical testimony" when formulating his emerging global-village vision. Whom is this eclectic group celebrating? Teilhard de Chardin finds allies among those searching for grains of spiritual truth in a secular universe. From the '20s to the '50s, Teilhard de Chardin drafted a series of poetic works about evolution that has reemerged as a foundation for new evolutionary theories. Teilhard imagined a stage of evolution characterized by a complex membrane of information enveloping the globe and fueled by human consciousness.

Teilhard saw the Net coming more than half a century before it arrived. But what were the popes so afraid of? iAhuasca. The Sync Book – Always Record. 08.15.13 Episode 61: Set the Controls (with Christopher Knowles) Link to this Episode. 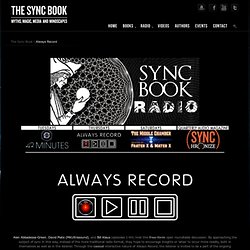 The 10 Most Amazing Places on Earth. A most peculiar illness made the news in 2010. 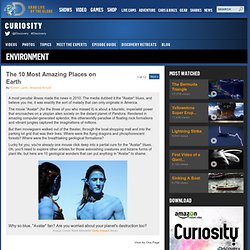 The media dubbed it the "Avatar" blues, and believe you me, it was exactly the sort of malady that can only originate in America. The movie "Avatar" (for the three of you who missed it) is about a futuristic, imperialist power that encroaches on a utopian alien society on the distant planet of Pandora. Rendered in amazing computer-generated splendor, this otherworldly paradise of floating rock formations and vibrant jungles captured the imaginations of millions.

But then moviegoers walked out of the theater, through the local shopping mall and into the parking lot grid that was their lives. Where were the flying dragons and phosphorescent forests? Lucky for you, you're already one mouse click deep into a partial cure for the "Avatar" blues. Why so blue, "Avatar" fan? 10. In "Avatar," a noble, indigenous people fight to protect their sacred landmarks against an invading culture. 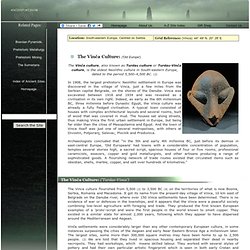 The Vinča culture, also known as Turdaș culture or Turdaș-Vinča culture, is the oldest Neolithic culture in South-eastern Europe, dated to the period 5,500–4,500 BC. (2) In 1908, the largest prehistoric Neolithic settlement in Europe was discovered in the village of Vinca, just a few miles from the Serbian capital Belgrade, on the shores of the Danube. Vinca was excavated between 1918 and 1934 and was revealed as a civilisation in its own right. Indeed, as early as the 6th millennium BC, three millennia before Dynastic Egypt, the Vinca culture was already a fully fledged civilisation.

A typical town consisted of houses with complex architectural layouts and several rooms, built of wood that was covered in mud. The houses sat along streets, thus making Vinca the first urban settlement in Europe, but being far older than the cities of Mesopotamia and Egypt. Pauline Kael. Entities. Synaptic Ether. This nOde last updated April 29th, 2003 and is permanently morphing. 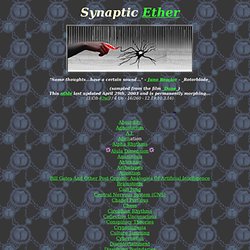 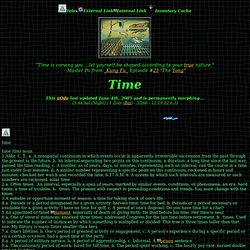 Home Theater Geeks 51. Scale_of_universe_enhanced.swf. An Atlas of Cyberspaces. This is an atlas of maps and graphic representations of the geographies of the new electronic territories of the Internet, the World-Wide Web and other emerging Cyberspaces. 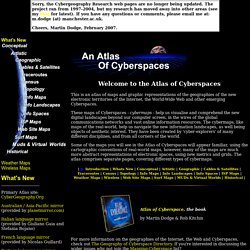 These maps of Cyberspaces - cybermaps - help us visualise and comprehend the new digital landscapes beyond our computer screen, in the wires of the global communications networks and vast online information resources. The cybermaps, like maps of the real-world, help us navigate the new information landscapes, as well being objects of aesthetic interest. They have been created by 'cyber-explorers' of many different disciplines, and from all corners of the world.