Kelly McGonigal: How to make stress your friend. Online Lean Six Sigma Certification & Training - GoLeanSixSigma.com. By Dewey Dorsett | Posted on March 21, 2012 5S is a fundamental pillar of a Lean deployment. 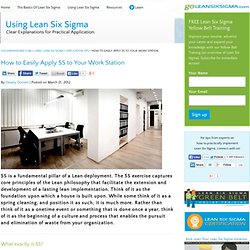 The 5S exercise captures core principles of the Lean philosophy that facilitate the extension and development of a lasting lean implementation. Think of it as the foundation upon which a house is built upon. Online Lean Six Sigma Certification & Training - GoLeanSixSigma.com. Waste is any step or action in a process that is not required to complete a process (called “Non Value-Adding”) successfully. 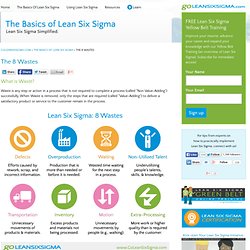 3 Keys to Career Success: The Pieces of PIE. How well you do your job has very little to do with how successful you are in your professional career. 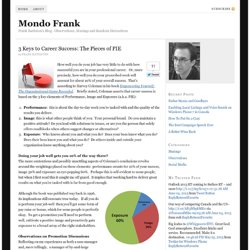 Or, more precisely, how well you do your prescribed work will account for about 10% of your overall success. That’s according to Harvey Coleman in his book Empowering Yourself, The Organizational Game Revealed . Briefly stated, Coleman asserts that career success is based on the 3 key elements of Performance, Image and Exposure (a.k.a. PIE): Performance : this is about the day-to-day work you’re tasked with and the quality of the results you deliver. Doing your job well gets you 10% of the way there? The more contentious and possibly unsettling aspects of Coleman’s conclusions revolve around the weightings placed on these elements: performance counts for 10% of your success, image 30% and exposure an eye-popping 60%.

Three Cynefin Ahas. Over the last year I’ve been increasingly influenced by ideas from Cynefin , created by Dave Snowden of Cognitive Edge . 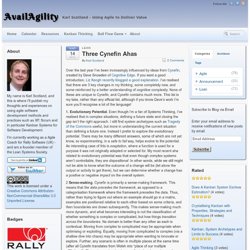 If you want a good introduction, Liz Keogh recently blogged a good explanation . I’ve realised that there are 3 key changes in my thinking, some completely new, and some reinforced by a better understanding of cognitive complexity. None of these are unique to Cynefin, and Cynefin contains much more. This list is my take, rather than any official list, although if you know Dave’s work I’m sure you’ll recognise a lot of the language! 1. 2 Sense-making . Cynefin framework and software code. Recently I read some article about Cynefin framework, it is really inspiring. 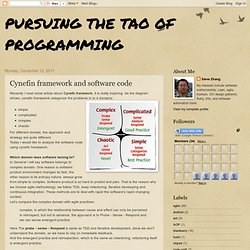 As the diagram shows, cynefin framework categorize the problems in to 4 domains: simplecomplicatedcomplexchaotic For different domain, the approach and strategy are quite different. Today I would like to analyze the software code using cynefin framework. Which domain does software belong to? In General I will say software belongs to complex domain. Complex, in which the relationship between cause and effect can only be perceived in retrospect, but not in advance, the approach is to Probe - Sense - Respond and we can sense emergent practice. Here The probe - sense - Respond is same as TDD and iterative development, since we don't understand the domain, so we have to rely on immediate feedback.

We can also conclude that the reason why waterfall does not working is because they assume the problem domain in software is always in simple domain. How about other domains? Cynefin. The various domains of the Cynefin model. 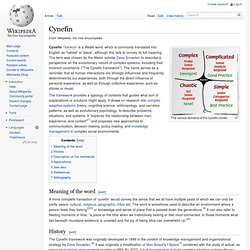 Cynefin /ˈkʌnɨvɪn/ is a Welsh word, which is commonly translated into English as 'habitat' or 'place', although this fails to convey its full meaning. The term was chosen by the Welsh scholar Dave Snowden to describe a perspective on the evolutionary nature of complex systems, including their inherent uncertainty ("The Cynefin framework"). The name serves as a reminder that all human interactions are strongly influenced and frequently determined by our experiences, both through the direct influence of personal experience, as well as through collective experience, such as stories or music. Value Streams are Made of People. Note by Al Shalloway: I’m happy to present this blog from Liz Keogh. 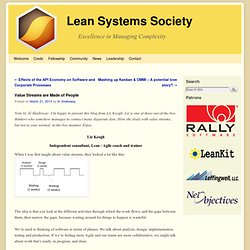 Impact, Outcome and Output. As I alluded to in the previous post , one of the changes in thinking, and in particular language, for me recently is the idea of impact . 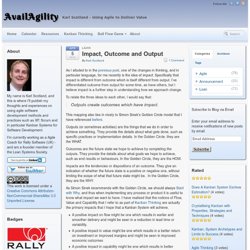 Specifically that impact is different from outcome which is itself different from output. I’ve differentiated outcome from output for some time, as have others, but I believe impact is a further step in understanding how we approach change. To relate the three ideas to each other, I would say that: Outputs create outcomes which have impact. What is Lean. The core idea is to maximize customer value while minimizing waste. 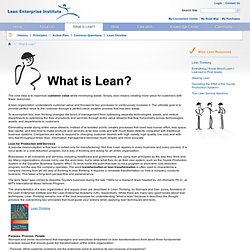 Simply, lean means creating more value for customers with fewer resources. A lean organization understands customer value and focuses its key processes to continuously increase it. The ultimate goal is to provide perfect value to the customer through a perfect value creation process that has zero waste. To accomplish this, lean thinking changes the focus of management from optimizing separate technologies, assets, and vertical departments to optimizing the flow of products and services through entire value streams that flow horizontally across technologies, assets, and departments to customers. Eliminating waste along entire value streams, instead of at isolated points, creates processes that need less human effort, less space, less capital, and less time to make products and services at far less costs and with much fewer defects, compared with traditional business systems.