Food is Free: Growing Food & Community in the Front Yard! 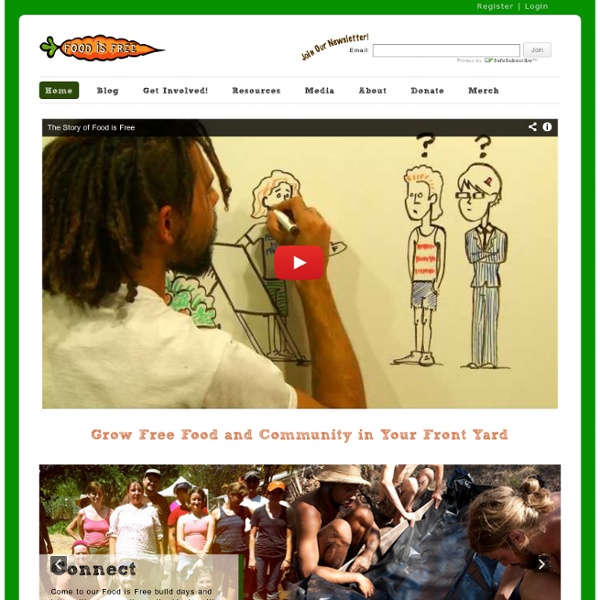 Berlin Farm Lab Some visual input from the first day of the gardening season. Thank you, Melina Daphne Papageorgiou for the beautiful photos! if you want to garden, come and find us every saturday at the Beilsteinerstrasse 51, in Berlin-Marzahn. more to come! Fiber-Optic Solar Toilet Turns Sewage To Plant Friend txchnologist: by Michael KellerWorld Water Day is coming up this Saturday. Moss Fm, the first radio that works with electricity captures by moss during photosynthesis! read more Urban farming and permaculture merge with the popular hiphop culture in Brussels! 'Utopian cob awesomeness' Community garden in Marzahn Berlin Farm Lab is looking for people who would like to start a community garden in Berlin-Marzahn! 10 Vegetables & Herbs You Can Eat Once and Regrow Forever There are some ingredients I cook with so often I can never buy too many of them, and most of them are produce. A film about place and memory, a farmhouse in Japan, and the lives of the people who called it home.

10 Ways To Create An Open Culture Three years ago, Grey London really needed to change. The industry had changed, the media landscape had changed and Grey remained a relatively successful (in financial terms at least), safe, but dull London outpost of a global network. Not a great, or ultimately sustainable, place to be if you’re in a creative industry. Grey had tried to change before. As a team, we have a shared dissatisfaction for how most agencies choose to work. To achieve actual change rather than paper change we needed three things: vision, courage and urgency, with the greatest focus on the latter--because talking about change rather than doing it is where most programs come unstuck. And we have. Here, based on our experience, are 10 ways to become Open. Don’t just strategize for change All businesses need to change. Strategy is, in fact, the easy bit. Do it now Pick the right team The operative word here is team. Do as I do, not as I say Fundamentally, culture is the behavior of management. Engage, don’t mandate

Free Winter Heat! - And It Goes Like This - Plan ahead now! This is one great way to take advantage of nature and keep warm in the winter, or warm your greenhouse. It can be used to heat water, and cut the cost of bills. Composte and warmth go hand in hand. Other Great Stories From Offgridquest.com: I bought a woodland with 60 strangers When I tell someone that I bought a wood with more than 60 people I didn't know, reactions vary from "Brilliant!" to "You must be nuts!" We moved to Stroud eight years ago and one of the pulls was the picturesque woodland nearby. I wanted to do more than just walk in the woods – I wanted to develop a connection to the beautiful landscape and learn woodland skills. Finding our wood Once we'd settled in, I put an ad in the local paper saying I was thinking of buying a bit of woodland and wondered if anyone had some to sell. We bemoaned the fact that there's such little woodland for sale, and that it's so expensive. About a year later, a 1.5-hectare wood came up for auction around 30 minutes' walk from Stroud. Creating our group Martin had experience of collaborative community projects, so we set out to find a group of people to buy it with us. It was clear that we all had quite similar interests and values, and we were very upfront. Sealing the deal The day of the auction was very exciting.

10 Practices Showing That "Sustainability" is More Than Just a Buzzword! Sustainability is the buzzword that’s making the world a better place! You have probably realized that the way we manage our resources is gaining more space in the media and transforming our means of production and development. On the other hand, you may also have bought some products being advertised as sustainable and, later, discovered that certain stages of their production were contrary to this principle. A sustainable world. You may wonder if sustainability is just another marketing ploy or whether it is being seriously practiced. So, to better understand how individuals, designers, environmentalists, and communities are using this concept, you should read the following 10 practices that are among the most important examples of sustainability. 10. Large scale conservation project. 9. Green roof. To make your roof a successful green space, you would rather use the Scandinavian tradition of planting hardy species, such as several kinds of grass that can thrive with low maintenance.

8 ANCIENT BELIEFS NOW BACKED BY MODERN SCIENCE The Earth may not be flat nor is it the center of the universe, but that doesn’t mean old-world intellectuals got everything wrong. In fact, in recent years, modern science has validated a number of teachings and beliefs rooted in ancient wisdom that, up until now, had been trusted but unproven empirically. Here are eight ancient beliefs and practices that have been confirmed by modern science. In their never-ending search for the best way to live, Greek philosophers argued over the relative benefits of hedonic and eudaimonic happiness. The study, which was published in the Proceedings of the National Academy of Sciences last year, found that while both types of happiness can make you feel good, the latter could promote physical health and longevity as well. The traditional Chinese medicine technique is believed to address imbalances in a person’s qi (pronounced chi), the circulating energy within every living thing.

6,000 lbs of food on 1/10th acre Off-grid Urban Homestead – Urban Permaculture Over 6,000 pounds of food per year, on 1/10 acre located just 15 minutes from downtown Los Angeles. Everything from there electricity, biodiesel, and 90% of the food they eat is produced on this 1/10 acre of property. There electric bill is usually $12.00 a month. To follow Urban Homesteading, you can find them at Comments comments Is It Really Money That Motivates Us? The Science Will Surprise You! (VIDEO) Human nature is not what we have been told. I couldn’t contain my excitement while watching this video because this is what I have always felt to be true. Not to mention it is now backed by a legitimate study! Many people love to blame “Human Nature” for the state of our world. Think about it: it takes on average 20 years, starting from a very early age, to shape us into so-called “functional members of society” at school. Enjoy this awesome RSA Animate adapted from a Dan Pink’s talk.

Soil Microbes And Human Health – Learn About The Natural Antidepressant In Soil By Bonnie L. Grant Prozac may not be the only way to get rid of your serious blues. Soil microbes have been found to have similar effects on the brain and are without side effects and chemical dependency potential. Learn how to harness the natural antidepressant in soil and make yourself happier and healthier. Read on to see how dirt makes you happy. Natural remedies have been around for untold centuries. Soil Microbes and Human Health Advertisement Did you know that there’s a natural antidepressant in soil? Lack of serotonin has been linked to depression, anxiety, obsessive compulsive disorder and bipolar problems. Most avid gardeners will tell you that their landscape is their “happy place” and the actual physical act of gardening is a stress reducer and mood lifter. Mycobacterium antidepressant microbes in soil are also being investigated for improving cognitive function, Crohn’s disease and even rheumatoid arthritis. How Dirt Makes You Happy

Eco Truly Park -Volunteer Program Ron Finley: A guerilla gardener in South Central LA Ron Finley plants vegetable gardens in South Central LA — in abandoned lots, traffic medians, along the curbs. Why? For fun, for defiance, for beauty and to offer some alternative to fast food in a community where “the drive-thrus are killing more people than the drive-bys.” Eating HealthyGardeningGIYGrow Food Not Lawns Related Posts « How To Keep Your Home Garden Monsanto-Free Cancer Doctor Explains How Cooking with Turmeric Leads to Amazing Health Benefits »