Design p21-29. Affordances evoked by social interaction. From AFFORDANCES FOR INTERACTION: THE SOCIAL IS MATERIAL FOR DESIGN William W. 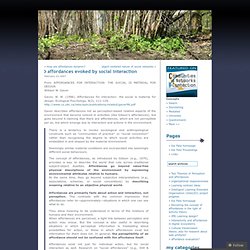 Gaver Gaver, W. W. (1996). Affordances for interaction: the social is material for design. Ecological Psychology, 8(2), 111–129. Gaver describes affordances not as perception-based relative aspects of the environment that become noticed in activities (like Gibson’s affordances), but goes beyond it claiming that there are affordances, which are not perceptible per se, but which emerge due to interaction and actions in the environment. There is a tendency to invoke sociological and anthropological constructs such as “communities of practice” or “social convention” rather than recognising the degree to which social activities are embedded in and shaped by the material environment. Solidarity In Action. As the current global economic and environmental crisis continues to affect more communities, the need for sustainable alternatives is growing; alternatives to war, to injustice, to poverty and to exclusion. 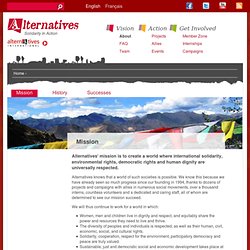 Thus, we can see that the work we started in 1994 is as urgent and relevant as ever. Alternatives was founded in 1994 by a coalition of non-profits working towards social justice. The organizations came together to find new ways to transform the communities in which we live through innovation. Innovating and Transforming In Canada and abroad, Alternatives’ programs leverage and reinforce the work of the local men and women in the communities where they take place.

In over 35 countries throughout Africa, Latin America, the Middle East and Asia, our activities strengthen the economic, social and political rights of communities affected by poverty, discrimination, exploitation and violence. El Agora English. The Commons as a Different Engine for Innovation. I delivered the following remarks on May 11 as part of The Illahee Lecture Series 2011, "Searching for Solutions: Innovation for the Public Good," in Portland, Oregon. 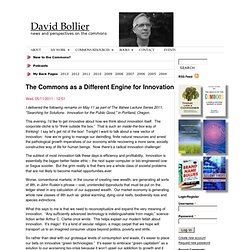 This evening, I’d like to get innovative about how we think about innovation itself. The corporate cliché is to “think outside the box.” That is such an inside-the-box way of thinking! I say let’s get rid of the box! Tonight I want to talk about a new vector of innovation: how we’re going to manage our dwindling, finite natural resources and arrest the pathological growth imperatives of our economy while recovering a more sane, socially constructive way of life for human beings.

The subtext of most innovation-talk these days is efficiency and profitability. Melbourne penalizes city folk who grow veggies on vacant land. By Christopher BantickWeekly Times First it was sea-changers then tree-changers that moved into country communities looking for rural bliss. 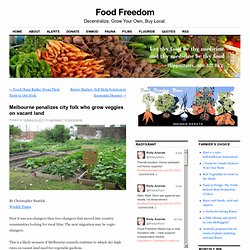 The next migration may be vegie-changers. This is a likely scenario if Melbourne councils continue to whack sky-high rates on vacant land used for vegetable gardens. The latest Melbourne council to penalise – yes penalise – people growing fruit trees and vegetables on their own unbuilt land is Darebin. Why? Well, what use is it having a vacant block when it could be used for housing? It’s a punitive strategy. According to Darebin City Council chief financial officer Kerrie Jordan, upping council rates on vacant land comes with a clear intention. Rates on vacant land in Darebin are three times the levy on residential property. Refugees in U.S. Take Up Farming.

Among the regular customers at the New Roots farm stand are Congolese women in flowing dresses, Somali Muslims in headscarves, Latino men wearing broad-brimmed hats and Burundian mothers in brightly patterned textiles who walk home balancing boxes of produce on their heads. 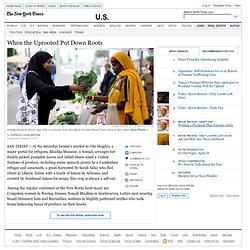 New Roots, with 85 growers from 12 countries, is one of more than 50 community farms dedicated to refugee agriculture, an entrepreneurial movement spreading across the country. American agriculture has historically been forged by newcomers, like the Scandinavians who helped settle the Great Plains; today’s growers are more likely to be rural subsistence farmers from Africa and Asia, resettled in and around cities from New York, Burlington, Vt., and Lowell, Mass., to Minneapolis, Phoenix and San Diego. [ZOOM IN] Urban farms give city folk 'food sovereignty'

Choi Chang-hwan, a 71-year-old retired worker, right, and his wife show off the rooftop garden of their house in Junghwa-dong, Seoul. 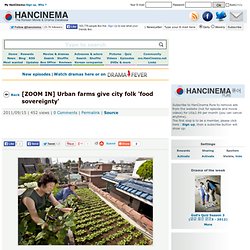 By Park Sang-moon When Choi Chang-hwan, a 71-year-old retired oil company worker, wakes up every morning to sweet chirpings of sparrows, his top priority isn't turning the pages of the morning newspaper while waiting for breakfast, like other aged Korean men. After jumping out of bed, Choi goes straight to the rooftop of his two-story house in Junghwa-dong, northeastern Seoul, to check the progress of his homegrown vegetables.

"There's nothing like planting a seed, nurturing it and harvesting it", Choi said. "It's amazing to see how vegetables go from my roof to my table. Choi said he needs to check his crops every morning to make sure seeds and vegetables aren't attacked by sparrows, pigeons or bugs. "I don't use harmful pesticides", he said. Choi is just one of a growing army of urban farmers in Korea. Green in the city Benefits of being urban farmers. Municipality of Rosario - Urban Agriculture - Awards. Rooftop gardens project. Urban Farming: Hydroponics in the City.