People, culture and lifestyle - About Australia. Australia is a product of a unique blend of established traditions and new influences. 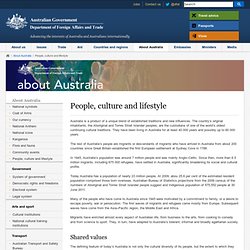 The country’s original inhabitants, the Aboriginal and Torres Strait Islander peoples, are the custodians of one of the world’s oldest continuing cultural traditions. They have been living in Australia for at least 40 000 years and possibly up to 60 000 years. The rest of Australia’s people are migrants or descendants of migrants who have arrived in Australia from about 200 countries since Great Britain established the first European settlement at Sydney Cove in 1788. 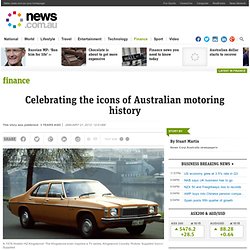 The Kingswood even inspired a TV series, Kingswood Country. Picture: Supplied Source: Supplied AUSTRALIAN-made cars are in the headlines again for all the wrong reasons. Small cars and off-roaders have eroded the Aussie big six's market share and the Great Australian Family Sedan is fighting for survival within a global car-making world that is becoming every more cut-throat. The strong Australian dollar has gutted the export market for Australian car makers and made imports cheaper to buy, just one of the factors being blamed for the demise of the traditional six-cylinder locally-built family car. 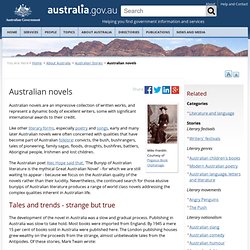 Courtesy of . Australian novels are an impressive collection of written works, and represent a dynamic body of excellent writers, some with significant international awards to their credit. Like other , especially and , early and many later Australian novels were often concerned with qualities that have become part of Australian : convicts, the bush, bushrangers, tales of pioneering, family sagas, floods, droughts, bushfires, battlers, Aboriginal people, Irishmen and lost children. The Australian poet 'The Bunyip of Australian literature is the mythical Great Australian Novel' - for which we are still waiting to appear - because we focus on the Australian quality of the novels rather than their lucidity. Australian slang - a story of Australian English. Slang can be seen as a demonstration of how experience shapes language and also how language shapes identity. 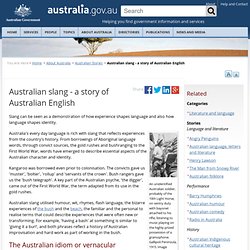 An unidentified Australian soldier, probably of the 10th Light Horse, on sentry duty with bayonet attached to his rifle, listening to music playing on the highly prized possession of a gramophone. Gallipoli Peninsula, 1915. Modern Australian fashion. Nicola Finetti, Dress of silk georgette, silk chiffon and metallic embroidery on silk organza. 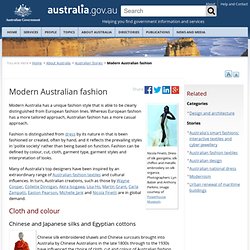 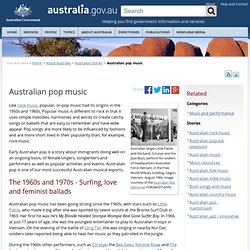 August 1966. Image courtesy of the : FOR/66/0714/VN. Like , popular, or pop music had its origins in the 1950s and 1960s. Popular music is different to rock in that it uses simple melodies, harmonies and words to create catchy songs or ballads that are easy to remember and have wide appeal. Sport Australia Hall of Fame - Legends of Australian Sport.

2014 Induction & Awards Dinner News Feed 21st Oct 2014 Search Legends of Australian Sport The Sport Australia Hall of Fame introduced the Legend status to recognise those members who have distinguished themselves at the highest level and in doing so have offered inspiration and example to Australia. 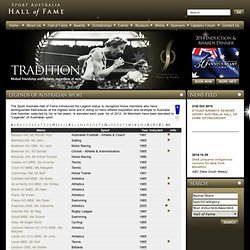 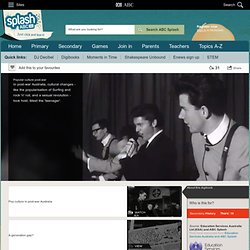 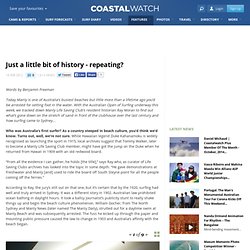 With the Australian Open of Surfing underway this week, we tracked down Manly Life Saving Club’s resident historian Ray Moran to find out what’s gone down on the stretch of sand in front of the clubhouse over the last century and how surfing came to Sydney… Who was Australia’s first surfer? As a country steeped in beach culture, you’d think we’d know. “From all the evidence I can gather, he holds [the title],” says Ray who, as curator of Life Saving Clubs archives has looked into the topic in some depth. According to Ray, the jury’s still out on that one, but it’s certain that by the 1920, surfing had well and truly arrived in Sydney. It wasn’t all good news, though. Cecil’s mate, Duke Kahanamoku arrived in Australia in 1915 after forming a close friendship at the 1912 Olympics.

“Manly is a unique place. Snowy. Tom O'Regan For years there have been debates over the 'kangaroo western' as a film production strategy. 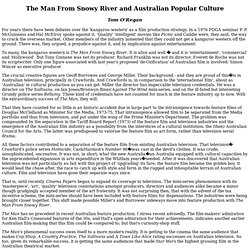 In a 1976 PDGA seminar P. P. McGuinness and Hal McElroy spoke against it. 'Quality' 'intelligent' movies like Picnic and Caddie were, they said, the way to crack the overseas market. To many, the kangaroo western is The Man From Snowy River. The crucial creative figures are Geoff Burrowes and George Miller.

That they have counted for so little is an historic accident due in large part to the intransigence towards feature films of Douglas McClelland as Minister for the Media, 1973-75. All these factors contributed to a separation of the feature film from existing Australian television. That is, until recently. The Man has no precedent in recent Australian feature production. Modern Australian poetry. Modern Australian poetry seeks to tell Australian stories and truths with a poetic significance, so that, 'they sear into the soul and can never be untold' ().

The aim for clarity is central. Following early intense debate about the meaning of modern poetry for Australia – its essence, innovation and international context – today, it is seen as cosmopolitan as well as laconic but still lucid. Visual arts and crafts. Skip to main content australia.gov.au Helping you find government information and services Show navigation decrease text size increase text size. Indigenous culture and history.

Connects Aboriginal and Torres Strait Islander people with Australian Government policies and programmes and raises awareness about the initiatives that affect them most. Department of the Prime Minister and Cabinet Conducts, facilitates and promotes Aboriginal and Torres Strait Islander studies, especially through research, collections and publications. This site provides information about AIATSIS, their programs, archives, library and Native Title Research Unit. There are also links to resources for family history, research grants and publications. Australian Institute of Aboriginal and Torres Strait Islander Studies. Australian dance. Dance is a very dynamic part of Australian performing arts culture. It can provide a rich performance experience, merging the imagination and skill of choreographers, dancers, designers, composers and musicians.