50 Years of David Bowie’s Hairstyles in a Single GIF. The 13 Most Criminally Overlooked Indies and Foreign Film. 50 Geeky Facts You Might Not Know About David Bowie. As we patiently await the release of 'Blackstar', Bowie's 25th studio album, here are some little-known facts about the man himself. 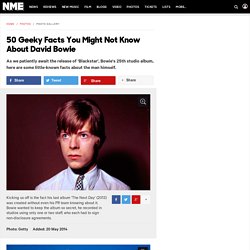 Sailor Moon DnD Character Sheets – Take Two! You asked for it and you got it! 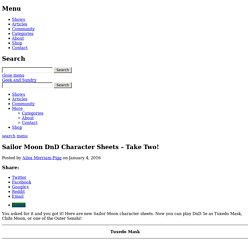 Here are new Sailor Moon character sheets. Now you can play DnD 5e as Tuxedo Mask, Chibi Moon, or one of the Outer Senshi! Tuxedo Mask Orphaned at a young age, the Urchin background is perfect for Tuxedo Mask! River Song complete Doctor Who timeline - when does River Song die? Gosh, River Song’s had a confusing life in Doctor Who. 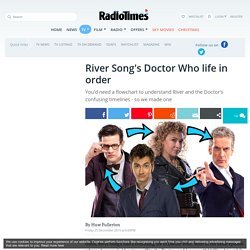 Born in the same episode where she revealed her true self to the Doctor, and (apparently) killing him while simultaneously shooting at her younger self – well, as the Twelfth Doctor commented in tonight’s Christmas special you’d need a flowchart to work it all out. But luckily you now have that flowchart, as here at RadioTimes.com we’ve put together our best guess for River’s personal timeline. In other words, we’ve mapped out her chronological life from her birth in 2011’s a Good Man Goes to War to her final goodbye in 2013’s The Name of the Doctor, and you can see it all in order below (with recurring episodes colour-coded). Not included are any off-screen adventures (so sorry, no Jim the Fish) or spin-off media, but apart from that we think it’s pretty complete. Enjoy! Click through for larger image. Interview: Crashing Ocean Waves Frozen in Stunning Moments Captured by Clark Little. When surfing expert Clark Little's wife was looking for a photo of the ocean to decorate their bedroom wall with in 2007, Little decided to forego the random gallery print and take matters into his own hands. 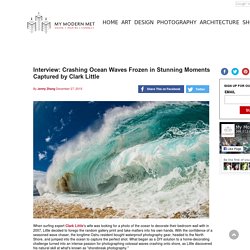 With the confidence of a seasoned wave chaser, the longtime Oahu resident bought waterproof photography gear, headed to the North Shore, and jumped into the ocean to capture the perfect shot. What began as a DIY solution to a home-decorating challenge turned into an intense passion for photographing colossal waves crashing onto shore, as Little discovered his natural skill at what's known as "shorebreak photography. " Every Noise at Once. Italian progressive metal deep symphonic black metal christian symphonic metal brazilian classical piano native american spiritual. 101 Albums To Hear Before You Die. These days, there's more good music available at your fingertips than you could ever hope to listen to. 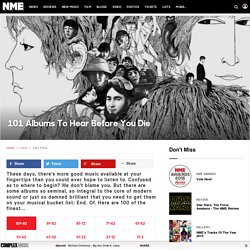 Confused as to where to begin? We don't blame you. But there are some albums so seminal, so integral to the core of modern sound or just so damned brilliant that you need to get them on your musical bucket list: End. Of. 9,550-Year-Old Tree Discovered in Sweden is the World's Oldest Individual Clonal Tree. Trees are some of the longest living organisms on earth, and this scraggly spruce is no exception. 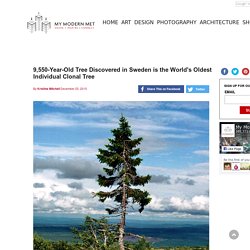 The ancient 16-foot-tall Norwegian tree grows high atop the Fulufjället Mountain in Sweden and goes by the name of Old Tjikko (named after the discovering geologist's dog). While this little shrub may not look like much, carbon dating of its root system has revealed that Old Tjikko it is actually a mind-boggling 9,550 years old. This means that its wizened bark and timeworn branches have seen thousands of years of human history come and go.

Discovered in 2004, this particular spruce comes from a species that traditionally decorated European homes during Christmas time, and is the planet’s longest-living identified plant. The incredible longevity of the plant actually stems from its intricate root system and ability to clone itself. Above photo by Karl Brodowsky on Wikimedia Photo by Leif Kullman Photo by Carkrull on Wikimedia Photo by Karl Brodowsky on Wikimedia via [Atlas Obscura] National Geographic’s Top 20 Photos Of 2015. National Geographic had embraced the digital medium with great gusto. 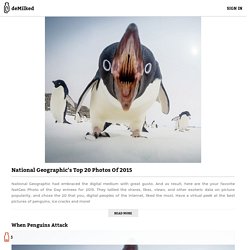 And as result, here are the your favorite NatGeo Photo of the Day entrees for 2015. They tallied the shares, likes, views, and other esoteric data on picture popularity, and chose the 20 that you, digital peoples of the internet, liked the most. Have a virtual peek at the best pictures of penguins, ice cracks and more! “Each day, we bring you one photo from around National Geographic that fits our criteria for Photo of the Day—sometimes classic, sometimes quirky, always an image with a story to tell,” the magazine commented on its website. More info: nationalgeographic.com | facebook | instagram | twitter (h/t: thisisnthappyness) Rare Color Photos Of Germany In 1900 Before It Was Destroyed By World Wars. What did Germany look like back before the two World Wars? 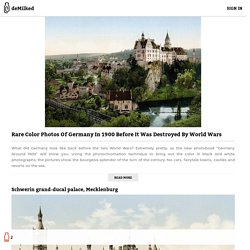 Extremely pretty, as the new photobook “Germany Around 1900” will show you. Using the photochromation technique to bring out the color in black and white photographs, the pictures show the bourgeois splendor of the turn of the century. Hilarious Expressions Of Hungry Dogs As They Try To Catch A Treat. Nobody tosses us food to catch with our mouths, otherwise we’d look no more graceful than these dogs. 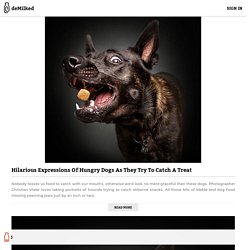 Photographer Christian Vieler loves taking portraits of hounds trying to catch airborne snacks. All those bits of kibble and dog food missing yearning jaws just by an inch or two. Christian Vieler, who comes from Waltrop, Germany, found an interest in portraits after he bought a camera in 2012. “Every shoot I am looking for that specific moment when the dog is looking as cute or funny as they can be,” Vieler said in an online interview. Hidden Destination Known As "The Venice of Japan" Is a Tourist-Free Dream Town. When traveling, is there anything better than stumbling upon a hidden destination without crowds of tourists? 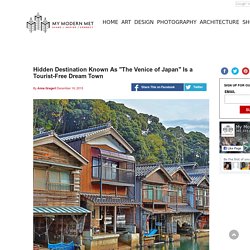 Luckily, this traveler's dream town exists within Japan's Kyoto Prefecture—it's a place known as Ine no Funaya (or The Boat Houses of Ine). Here visitors will find a row of 230 wooden boathouses constructed on the water's edge, which is why it's nicknamed "The Venice of Japan. " Many of these homes were built with garage-style doors that serve as a spot where people can anchor their boats. Since the water remains still and doesn't feature crashing waves, residents are shielded from storms and can live in wooden homes.

Thanks to this area's uniqueness, it's been protected and named a site of "important traditional buildings. " Even though The Boat Houses of Ine was initially a fishing town, many of the boathouses have been transformed into lodgings for travelers. Above photo via k.hassi Photo: hk_willie Photo: advaita00 Photo: julie05200520. Artist Humorously Illustrates the Events of His Flight That Every Traveler Can Relate To. Renowned New York Times illustrator Christoph Niemann recently took a transatlantic flight from New York City to Berlin (with a layover in London), and documented the journey in his sketchbook. Our favorite graphic novels, one-shots, and archives of 2015 · Best of. Two stunning works by twin brothers. A biography of Adolf Hitler by a manga master. A first-person account of the civil rights movement from one of its key figures. Japanese Store Designs Specially Made Samurai Armor for Cats and Dogs.

Japanese pet supply store Kandaya wants your pet to channel their inner samurai with some adorable armor. Using an eye-catching green and purple color palette, the shop designed a line of armor that mimics the Eva Unit-01 giant robot from the science fiction anime Neon Genesis Evangelion. They also have a more traditional line, which pays homage to the samurais of the past. One such samurai is actually buried in the same city where the store is located. In the metropolis of Kurayoshi, famous samurai Satomi Tadayoshi was laid to rest and it's believed that he later inspired one of the characters in The Legend of the Eight Dogs novel.

Russian Miner Photographs Arctic Foxes During His Work Breaks (Part 2) Ivan Kislov has better things to do on his lunch breaks than check stuff on Facebook. He goes out and takes stunning pictures of Arctic foxes! The beautiful animals play in the snow and even appear posing for the camera. Humorous Charts and Graphs Show What Being an Introvert Is All About. BuzzFeed Life's assistant health editor Anna Borges created a series of graphs any introvert can relate to. There are pie charts depicting how truly wonderful it is to have a vivid inner world, unwavering sense of self, and top-notch listening skills. 10 Best LGBT Films Every Straight Person Should See. Just in time for you to curl up with friends and family to watch some great movies over the holidays, members of the Gay and Lesbian Entertainment Critics Association (GALECA.com) have shared their 10 Best LBGTQA Films GALECA Every Non-LGBTQA Person Should See!

Adorable and Rare Orange Monkey Is Born in Sydney.