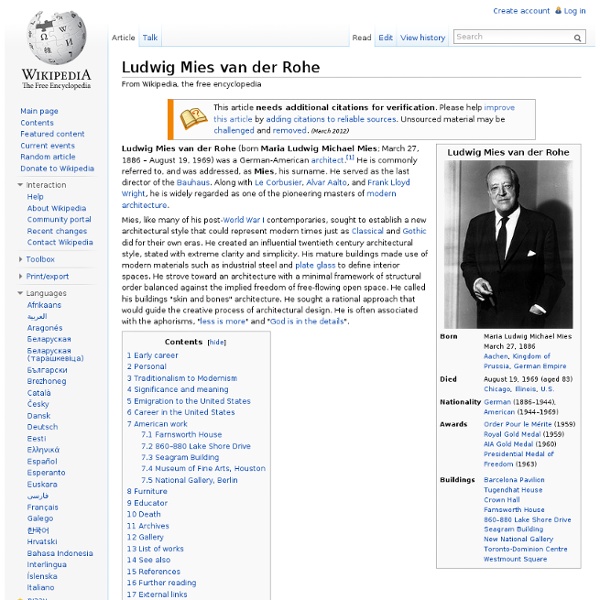 Ludwig Mies van der Rohe (born Maria Ludwig Michael Mies; March 27, 1886 – August 17, 1969) was a German-American architect.[1] He is commonly referred to and was addressed as Mies, his surname. Along with Le Corbusier, Alvar Aalto, and Frank Lloyd Wright, he is widely regarded as one of the pioneering masters of modern architecture. Mies, like many of his post-World War I contemporaries, sought to establish a new architectural style that could represent modern times just as Classical and Gothic did for their own eras. He created an influential twentieth-century architectural style, stated with extreme clarity and simplicity. Early career[edit] Mies was born in Aachen, Germany. His talent was quickly recognized and he soon began independent commissions, despite his lack of a formal college-level education. He began his independent professional career designing upper-class homes, joining the movement seeking a return to the purity of early nineteenth-century Germanic domestic styles.

Walter Gropius Walter Adolph Georg Gropius (May 18, 1883 – July 5, 1969) was a German architect and founder of the Bauhaus School,[1] who, along with Ludwig Mies van der Rohe, Le Corbusier and Frank Lloyd Wright, is widely regarded as one of the pioneering masters of modern architecture. Early life[edit] Born in Berlin, Walter Gropius was the third child of Walter Adolph Gropius and Manon Auguste Pauline Scharnweber (1855-1933). Early career (1908–1914)[edit] Walter Gropius, like his father and his great-uncle Martin Gropius before him, became an architect. In 1913, Gropius published an article about "The Development of Industrial Buildings," which included about a dozen photographs of factories and grain elevators in North America. Bauhaus period (1919–1932)[edit] Bauhaus (built 1925–1926) in Dessau, Germany Walter Gropius's Monument to the March Dead (1921) dedicated to the memory of nine workers who died in Weimar resisting the Kapp Putsch Gropius's career advanced in the postwar period. Death[edit]

Carlo Scarpa Castelvecchio, stairs by Carlo Scarpa Castelvecchio, by Carlo Scarpa Carlo Scarpa (June 2, 1906 – November 28, 1978), was an Italian architect, influenced by the materials, landscape, and the history of Venetian culture, and Japan.[1] Scarpa was also a glass and furniture designer of note. Biography[edit] Scarpa was born in Venice. However, Scarpa refused to sit the pro forma professional exam administrated by the Italian Government after World War II. His architecture is deeply sensitive to the changes of time, from seasons to history, rooted in a sensuous material imagination. One of his last projects, left incomplete at the time of his death, was recently altered (October 2006) by his son Tobia: the Villa Palazzetto in Monselice. In 1978, while in Sendai, Japan, Scarpa died after falling down a flight of concrete stairs. Notable works[edit] References[edit] Bibliography[edit] Francesco Dal Co; Giuseppe Mazzariol (2002). External links[edit]

Le Corbusier Charles-Édouard Jeanneret-Gris, better known as Le Corbusier (French: [lə kɔʁbyzje]; October 6, 1887 – August 27, 1965), was a Swiss-French architect, designer, painter, urban planner, writer, and one of the pioneers of what is now called modern architecture. He was born in Switzerland and became a French citizen in 1930. His career spanned five decades, with his buildings constructed throughout Europe, India, and America. Dedicated to providing better living conditions for the residents of crowded cities, Le Corbusier was influential in urban planning, and was a founding member of the Congrès International d'Architecture Moderne (CIAM). Early life and education, 1887–1914[edit] He was born as Charles-Édouard Jeanneret-Gris in La Chaux-de-Fonds, a small city in Neuchâtel canton in north-western Switzerland, in the Jura mountains, just 5 kilometres (3.1 mi) across the border from France. Early career: The villas, 1914–30[edit] Pseudonym adopted, 1920[edit] Personal life[edit] Urbanism[edit]

Louis Kahn From 1957 until his death, he was a professor of architecture at the School of Design at the University of Pennsylvania. Kahn created a style that was monumental and monolithic; his heavy buildings do not hide their weight, their materials, or the way they are assembled. Louis Kahn's works are considered as monumental beyond modernism. Famous for his meticulously built works, his provocative unbuilt proposals, and his teaching, Kahn was one of the most influential architects of the 20th century. Biography[edit] Early life[edit] Jesse Oser House, Elkins Park, Pennsylvania (1940) Louis Kahn, whose original name was Itze-Leib (Leiser-Itze) Schmuilowsky (Schmalowski), was born into a poor Jewish family in Pärnu,[citation needed] Estonia and spent his early childhood in Kuressaare on the island of Saaremaa. In 1906, his family emigrated to the United States, as they feared that his father would be recalled into the military during the Russo-Japanese War. Career[edit] Louis Kahn's Salk Institute

Marcel Breuer Marcel Lajos Breuer (pronounced BROY-ər ;22 May 1902 – 1 July 1981), was a Hungarian-born modernist, architect and furniture designer of Jewish descent. One of the masters of Modernism, Breuer extended the sculptural vocabulary he had developed in the carpentry shop at the Bauhaus into a personal architecture that made him one of the world’s most popular architects at the peak of 20th-Century design. Life and work[edit] Known to his friends and associates as Lajkó (the diminutive of his middle name and pronounced LOY-ko), Breuer left his hometown at the age of 18 in search of artistic training and was one of the first and youngest students at the Bauhaus– a radical arts and crafts school that Walter Gropius had founded in Weimar just after the first World War. It was Gropius who assigned him Interiors at the 1927 Weissenhofsiedlung and led him to his first house assignment for the Harnischmachers in Wiesbaden in 1932. University of Massachusetts campus center (right), Amherst, 1965-1969