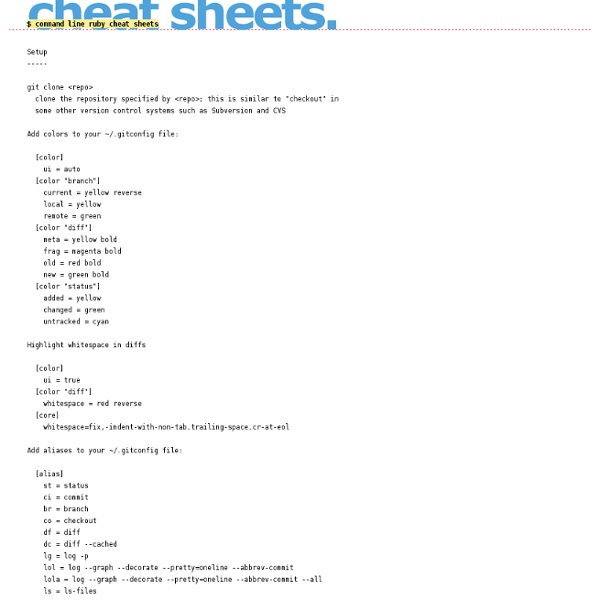 Collaborating with Others cli collaboration Table of Contents Adding collaborators Other developers (identified by email address) can be invited to collaborate on your app: heroku sharing:add joe@example.com Adding joe@example.com to myapp collaborators... done Git - SVN Crash Course Welcome to the Git version control system! Here we will briefly introduce you to Git usage based on your current Subversion knowledge. You will need the latest Git installed; There is also a potentially useful tutorial in the Git documentation. This page is not maintained anymore!

Don't write on the whiteboard I recently interviewed at a major technology company. I won't mention the name because, honestly, I can't remember whether I signed an NDA, much less how strong it was. I did well. Mostly because of luck. I normally step over myself when I interview. I guess I've improved over the years. Git FAQ What is Git? Git is a distributed version control system developed by Junio Hamano and Linus Torvalds. Git does not use a centralized server. How To Configure Remote Access To Your Ubuntu Desktop Version 1.0 Author: Falko Timme <ft [at] falkotimme [dot] com> Last edited 01/23/2008 This guide explains how you can enable a remote desktop on an Ubuntu desktop so that you can access and control it remotely. This makes sense for example if you have customers that are not very tech-savvy. If they have a problem, you can log in to their desktops without the need to drive to their location. I will also show how to access the remote Ubuntu desktop from a Windows XP client and an Ubuntu client.

Git Magic Git is a version control Swiss army knife. A reliable versatile multipurpose revision control tool whose extraordinary flexibility makes it tricky to learn, let alone master. As Arthur C. 高飞鸟 – Highbird » Git One of the difficult things for a git beginner to understand is how remote branches work. Basically, as git is a distributed version control system, every developer has a full and independent repository. So, how can you pass changes around?

Java Anti-Patterns This page collects some bad code that may not look so obviously bad to beginners. Beginners often struggle with the language syntax. They also have little knowledge about the standard JDK class library and how to make the best use of it. In fact I have collected all examples from everyday junior code. I have modified the original code to give it example character and such that it highlights the problems.

Git User’s Manual (for version 1.5.3 or newer) This chapter covers internal details of the Git implementation which probably only Git developers need to understand. A birds-eye view of Git’s source code It is not always easy for new developers to find their way through Git’s source code. Ruby QuickRef Table of Contents Language General Tips These are tips I’ve given over and over and over and over… Use 2 space indent, no tabs. GitFaq - GitWiki What is Git? Git is a distributed version control system developed by Junio Hamano and Linus Torvalds. Git does not use a centralized server. Git runs on Linux, BSD, Solaris, Darwin, Windows, Android and other operating systems. Why the 'Git' name? Quoting Linus: "I'm an egotistical bastard, and I name all my projects after myself. A Visual Git Reference If the images do not work, you can try the Non-SVG version of this page. SVG images have been disabled. (Re-enable SVG) This page gives brief, visual reference for the most common commands in git. Once you know a bit about how git works, this site may solidify your understanding. If you're interested in how this site was created, see my GitHub repository.