Blog of Ryan Bigg - Ubuntu, Ruby, RVM, Rails, and You 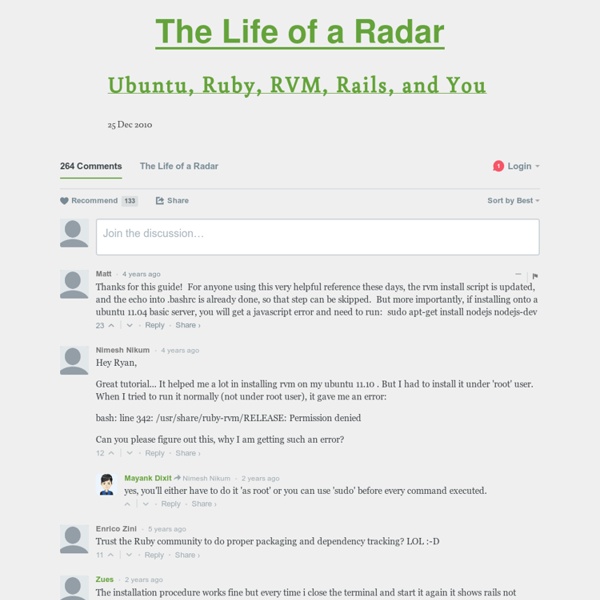 Things To Tweak / Fix After Installing Ubuntu 11.04 Natty Narwhal A note before reading this post: before giving up on Unity without giving it a try... don't. Try Unity for a few days - yes, it's not a finished product but it's actually quite interesting - and if you don't like it then switch. If you've just upgraded to Ubuntu 11.04 Natty Narwhal, there are probably a few things you'll miss, so here is how to get them back as well as some other things you may find useful. Install CompizConfig Settings Manager and Tweak Unity to better suit your needs: sudo apt-get install compizconfig-settings-manager Then search for CompizConfig Settings Manager in Dash and you'll find the Unity-related options under the "Unity" Compiz plugin. Using CCSM, you'll be able to tweak the Unity launcher reveal mode, hide behavior, change some Unity-specific keyboard shortcuts, change the Unity launcher icon size, the top panel opacity, tweak various animations and more. Another tool for configuring some hidden Unity settings is Dconf-editor. sudo apt-get install dconf-tools

Dev Center | Collaborating with Others cli collaboration Table of Contents Adding collaborators Other developers (identified by email address) can be invited to collaborate on your app: heroku sharing:add joe@example.com Adding joe@example.com to myapp collaborators... done When you invite a collaborator, they’ll be sent an email to let them know they were granted access to the app. Collaborator privileges All actions are supported for collaborators as they are for app owners except for the following, which are only support for app owners: Adding or removing paid add-onsDeleting or renaming the appViewing invoices These are the only actions that are restricted. Accessing an app as a collaborator When someone grants you access to an app, you will receive an email with the app name and some other information to help you get started: Next you should clone the app locally. At this point you can use git push heroku to deploy local commits. Viewing collaborators Use the heroku sharing command to see the list of current collaborators:

10 things to do after installing Ubuntu 11.04 So you’ve downloaded or upgraded to the latest release of Ubuntu – the nominal Natty Narwhal – but what now? As is now tradition around these parts, we present you with a list of 10 post-install tips/ideas to make your time with the Narwhal less of a splash in the deep end and more of a serene swim… 1. Read about the new features Ubuntu 11.04 comes with so many new features and tricks that it’d be all-to-easy to miss some out. Check it out at omgubuntu.co.uk/natty 2. Even the Ubuntu team isn’t perfect – and chances are there may have been some last minute updates added to Ubuntu after the ISO you downloaded was built. Run Update Manager by searching for it in the Dash and you’ll be sure to have the most up-to-date minty fresh version of 11.04 3. Due to legal reasons, Ubuntu can’t ship things like patent-encumbered codecs for playing back things like MP3s, .WMV videos or encrypted DVDs. Graphics Ubuntu should automatically detect and alert you that 3D drivers are available. 4. But not to worry!

Heroku | Cloud Application Platform Tom's Hardware US Ubuntu, like any Linux distribution, is just that: a distribution. Linux distributors do not develop everything that goes into a distribution; they must rely on a myriad of open-source software projects to compose the bulk of their end-product. Let's take a moment to see what really makes Ubuntu Ubuntu. One Kick-Ass Kernel Ubuntu 11.04 features version 2.6.38 of the Linux kernel, which benefits from the now-famous 200ish lines of code that (purportedly) improve system performance substantially. LibreOffice Ubuntu kicked Oracle's OpenOffice to the curb in favor of the Document Foundation's LibreOffice. Banshee Banshee 2.0 unseats RhythmBox as the default music manager in Ubuntu 11.04. Like RhythmBox before it, quick access to Banshee's playback controls are now accessible via the volume indicator applet in the top panel. The table below lists other essential default software included in Ubuntu 11.04: Ubuntu Software Center 4.0 Ubuntu One System Settings/Control Center

Installing Ruby in my Ubuntu environment. by mr.rsposton Oct 24