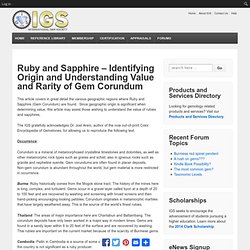 Since geographic origin is significant when determining value, this article may assist those wishing to understand the value of rubies and sapphires. The IGS gratefully acknowledges Dr. Joel Arem, author of the now out-of-print Color Encyclopedia of Gemstones, for allowing us to reproduce the following text. Occurrence: Corundum is a mineral of metamorphosed crystalline limestones and dolomites, as well as other metamorphic rock types such as gneiss and schist; also in igneous rocks such as granite and nepheline syenite. Burma: Ruby historically comes from the Mogok stone tract. Thailand: The areas of major importance here are Chantabun and Battambang. Cambodia: Pailin in Cambodia is a source of some of the world’s finest sapphires, but the country is not significant as a ruby producer. Namibia: At Namaqualand opaque ruby is found that is suitable for cabochons. Stone Sizes. Gemstone Origin: Does it Really Matter? at AJS Gems.

A fine natural gemstone is a fine gem, no matter where it was mined. 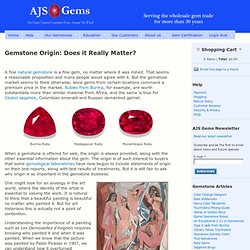 That seems a reasonable proposition and many people would agree with it. But the gemstone market seems to think otherwise, since gems from certain locations command a premium price in the market. Rubies from Burma, for example, are worth substantially more than similar material from Africa, and the same is true for Ceylon sapphire, Colombian emerald and Russian demantoid garnet. When a gemstone is offered for sale, the origin is always provided, along with the other essential information about the gem. The origin is of such interest to buyers that some gemological laboratories have now begun to include statements of origin on their test reports, along with test results of treatments. One might look for an analogy in the art world, where the identity of the artist is essential to valuing the work.

However, this analogy is not easily applied to the gems world. Why then are Burmese rubies especially valued? Rubies… inextinguishable flames of value and treasure. From shades of pink to deep blood-red, rubies are a treasured gemstone and a variety of the mineral corundum (which sapphires also come from) and are the birthstone for the month of July. 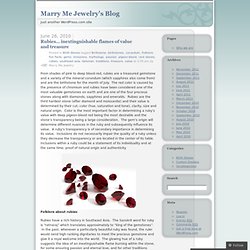 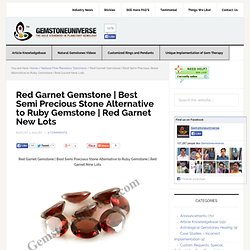 No matter where, women have loved their garnet stone jewelry for its rich color. No wonder the color red in garnet is an extremely popular colour in cosmetics as well as apparel. Gemstoneuniverse brings two new lots of beautiful natural red garnets – AGNI 2013 and SUTRA 2013. Natural red garnet is pyrope garnet with magnesium aluminium silicate as its chemical composition. The new parcel of natural Mozambique red garnet called AGNI 2013 has premium quality red garnets. . - is fully natural red garnet - is of Mozambique origin - has deep intimate red color - excellent clarity - is a calibrated oval of 10*8 size - is free from any doshas that would hamper gem therapy results - has abundant Surya energies - Top Jyotish GemstonesEnjoy AGNI 2013 in video: Are Powerful Jyotish Quality Gemstones. Marry Me Jewelry's Blog. Although Rubies are the official birthstone for July they can be pricey. 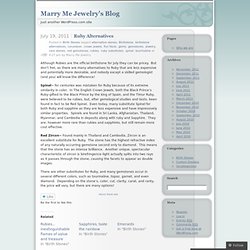 But don’t fret, as there are many alternatives to Ruby that are less expensive and potentially more desirable, and nobody except a skilled gemologist (and you) will know the difference! Spinel~ for centuries was mistaken for Ruby because of its extreme similarity in color. In The English Crown Jewels, both the Black Prince’s Ruby-gifted to the Black Prince by the king of Spain, and the Timur Ruby, were believed to be rubies, but, after gemological studies and tests, been found in fact to be Red Spinel.

Even today, many substitute Spinel for both Ruby and sapphire as they are less expensive and have impressively similar properties. Spinel: The gemstone ruby Spinel information and pictures. Spinel is a gemstone that comes in a variety of colors. 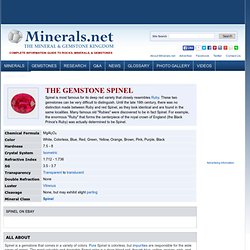 Pure Spinel is colorless, but impurities are responsible for the wide range of colors. The most valuable and desirable Spinel color is a deep blood red, though blue, yellow, orange, pink, and purple colors also make fine gemstones. Spinel is often fluorescent in ultraviolet light, and this can be helpful in its identification. Ruby. A ruby is a pink to blood-red colored gemstone, a variety of the mineral corundum (aluminium oxide). 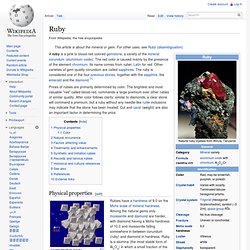 The red color is caused mainly by the presence of the element chromium. Its name comes from ruber, Latin for red. Other varieties of gem-quality corundum are called sapphires. Synthetic and imitation rubies.