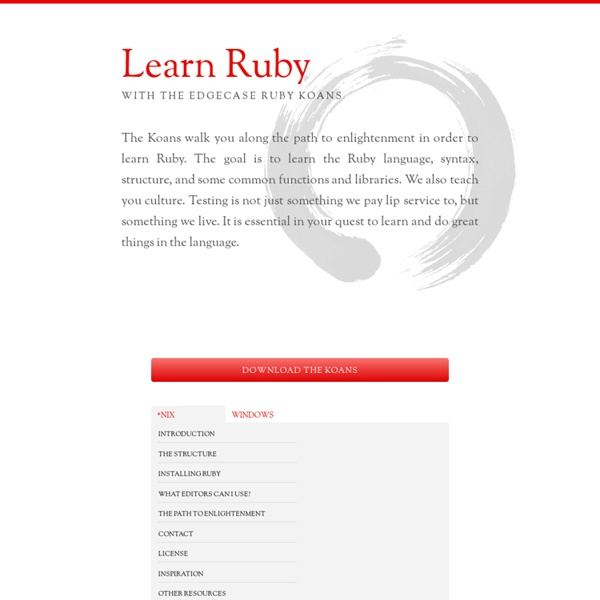 The Koans walk you along the path to enlightenment in order to learn Ruby. The goal is to learn the Ruby language, syntax, structure, and some common functions and libraries. We also teach you culture. Testing is not just something we pay lip service to, but something we live. It is essential in your quest to learn and do great things in the language. The Structure

Preface Working with both Object-Oriented software and Relational Databases can be cumbersome and time consuming. Development costs are significantly higher due to a paradigm mismatch between how data is represented in objects versus relational databases. Hibernate is an Object/Relational Mapping solution for Java environments. The term Object/Relational Mapping refers to the technique of mapping data from an object model representation to a relational data model representation (and visa versa). See for a good high-level discussion. Ruby language In this part of the Ruby tutorial, we will introduce the Ruby programming language. Goal The goal of this tutorial is to get you started with the Ruby programming language. The tutorial covers the core of the Ruby language, including variables, expressions, collections, control structures and other core features. It also describes some more advanced concepts like object-oriented programming and regular expressions. It is not a complete coverage of the language.

Scaffolding Need reasons to love Bootstrap? Look no further. By nerds, for nerds. Built at Twitter by @mdo and @fat, Bootstrap utilizes LESS CSS, is compiled via Node, and is managed through GitHub to help nerds do awesome stuff on the web. Made for everyone. Bootstrap was made to not only look and behave great in the latest desktop browsers (as well as IE7!) SQLZOO Learn SQL using: SQL Server, Oracle, MySQL, DB2, and PostgreSQL. Reference: how to... How to read the data from a database. .bash_profile vs .bashrc When working with Linux, Unix, and Mac OS X, I always forget which bash config file to edit when I want to set my PATH and other environmental variables for my shell. Should you edit .bash_profile or .bashrc in your home directory? You can put configurations in either file, and you can create either if it doesn’t exist. But why two different files? What is the difference? According to the bash man page, .bash_profile is executed for login shells, while .bashrc is executed for interactive non-login shells.

Getting Started with Ruby on Heroku Introduction This tutorial will have you deploying a Ruby app in minutes. Hang on for a few more minutes to learn how it all works, so you can make the most out of Heroku. The tutorial assumes that you have: a free Heroku accountRuby 2.2.3 installed - see the installation guides for Ruby and Rails on OS X, Windows and LinuxBundler installed - run gem install bundler Ruby Primer - Loops in Ruby Loops are programming constructs that help you repeat an action an arbitrary number of times. The methods Array#each, Array#select etc. are the most frequently used loops since the primary use of loops is to iterate over or transform a collection, something that we'll learn in the chapter on "Arrays in Ruby." Here we will cover two basic looping constructs you can use to solve most other looping requirements that may come up. Infinite Loops Infinite loops keep running till you explicitly ask them to stop.

a friendly place for Java greenhorns - Certification Info JavaRanch Certification Info To pass the SCJP you must: You gotta read books; you gotta write some code. Give yourself 3 months (less if you're a C++ programmer). Get some examples from the CodeBarn, and stories at the Campfire.