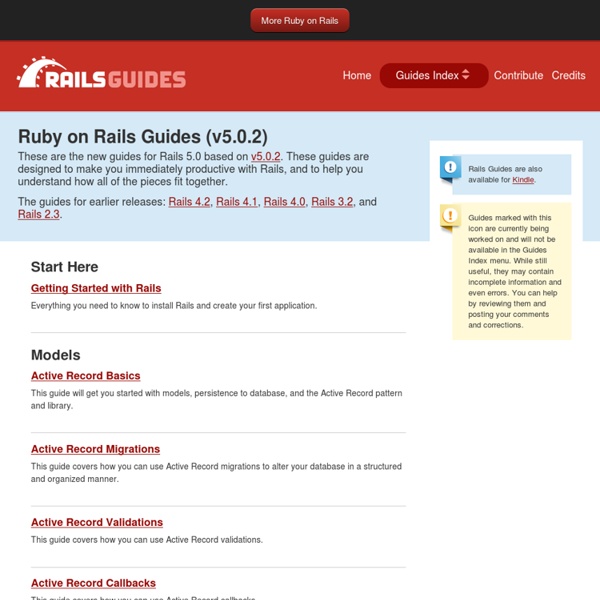 Start Here Getting Started with Rails Everything you need to know to install Rails and create your first application. Models Active Record Basics This guide will get you started with models, persistence to database and the Active Record pattern and library.

Ruby on Rails Tutorial: Learn Rails by Example Michael Hartl Contents Foreword Automated Testing Suites in Ruby on Rails « Kansas City on Rails Automated Testing Suites in Ruby on Rails Make no mistake: web applications are not documents, they are software. While a simple brochure-style site may contain nothing more than static HTML pages, your typical Ruby on Rails application is something more. After all, if you only need a few static pages to your site, there’s no reason to bring Rails into the mix to begin with. Web applications have evolved into sophisticated beasts. How much “sophistication” or “beast” you see largely depends on the caliber of developer you hire.

Learn Ruby: How to Get Up to Speed Quickly Getting Up to Speed with Ruby Whether you already have experience programming with other languages or you’re learning Ruby as your first programming language, Ruby is a relatively easy language to pick up. You will need a walk-through that helps you set up Ruby initially if you aren’t an experienced programmer, but you’ll be able to start building your first program immediately. Ruby uses a package manager to allow easy downloads of existing repositories and libraries, known as ‘gems’ — any good Ruby tutorial will walk you through the process of installing Ruby gems, as well as writing code in Ruby. Becoming a Ruby expert will take longer, of course.

For the Single Founder Who Can’t Code Editor’s note: This is a guest post by Mick Hagen (@mickhagen), founder and CEO of Undrip. He was previously the founder of Zinch which was acquired by Chegg last year. He made headlines in the Fall with his rap campaign – an unorthodox approach to fundraising. You can learn more about him at MickHagen.com. Last summer when I started working on Undrip, I was in a tough spot. The Best Way to Learn Rails I come from a PHP background, but these days, I'm a full-time Rails developer. The difficulty for most people who make the switch lies in the learning curve that’s involved. Once you've become proficient in a language or framework, switching to a new one feels like an unnecessary (and time-consuming) challenge.

File: HAML_REFERENCE Haml is a markup language that’s used to cleanly and simply describe the HTML of any web document, without the use of inline code. Haml functions as a replacement for inline page templating systems such as PHP, ERB, and ASP. However, Haml avoids the need for explicitly coding HTML into the template, because it is actually an abstract description of the HTML, with some code to generate dynamic content. Features

23 Amazing And Open Source Ruby On Rails Applications Home » Extras » 23 Amazing And Open Source Ruby On Rails Applications Ruby on Rails is a powerful web framework that helps creating web applications easier, faster & writing an organized code. There are lots of websites that use it including popular ones like Twitter, Basecamp, AboutUs & many more. Think Python: How to Think Like a Computer Scientist How to Think Like a Computer Scientist by Allen B. Downey This is the first edition of Think Python. Ruby on Rails Tutorial: Learn Rails by Example book and screencasts by Michael Hartl Michael Hartl Contents Foreword My former company (CD Baby) was one of the first to loudly switch to Ruby on Rails, and then even more loudly switch back to PHP (Google me to read about the drama). This book by Michael Hartl came so highly recommended that I had to try it, and the Ruby on Rails Tutorial is what I used to switch back to Rails again.

Latest Free Screencasts from Screencasts.org Creating a Bookmarklet with Remote JavaScript Code → In this quick free JavaScript video tutorial we'll show you how to load in a remote JavaScript file in to a bookmarklet. View Episode → Creating a Simple Bookmarklet → Building a Social Network Site in Rails I’m not going to cover how to actually code an entire social network site in rails as all social network sites vary in their functionality (and it’ll take too long). I will cover plugins and other things you might find useful though. Quick Start If you don’t really want to do the coding but want to get a site up and running and soon as possible, you may want to have a look at Lovd by Less by the guys over at Less Everything. Lovd by Less contains user signups, galleries, blogs, comments and various other things that you might want, so it’s a great starting block for your site. Social Network Plugins

Features - Sugar Arrays Sugar begins by fixing broken support for standard Javascript 1.6 array methods, such as indexOf, forEach, reduce, etc. These methods are also enhanced to accept arguments that browser native methods won't, such as nested objects, iterating functions, regexes, or strings that provide a shortcut to an iterating function. In such cases, however, browser native methods will always be defered to when possible.