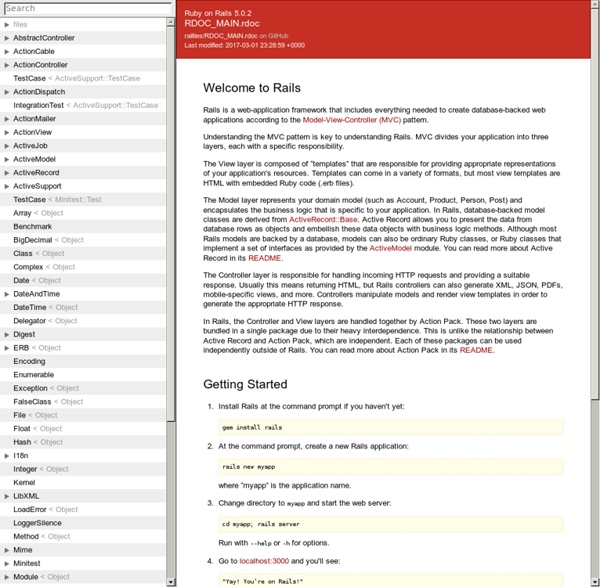 Ruby on Rails Guides: Asset Pipeline 1 What is the Asset Pipeline? The asset pipeline provides a framework to concatenate and minify or compress JavaScript and CSS assets. It also adds the ability to write these assets in other languages such as CoffeeScript, Sass and ERB. Prior to Rails 3.1 these features were added through third-party Ruby libraries such as Jammit and Sprockets. Rails Tutorial · Devise with RSpec and Cucumber Devise with RSpec and Cucumber Introduction Ruby on Rails tutorial showing how to create a Rails 3.2 application using Devise with RSpec and Cucumber. Ruby on Rails Tutorial: Learn Rails by Example Michael Hartl Contents Foreword My former company (CD Baby) was one of the first to loudly switch to Ruby on Rails, and then even more loudly switch back to PHP (Google me to read about the drama). This book by Michael Hartl came so highly recommended that I had to try it, and the Ruby on Rails Tutorial is what I used to switch back to Rails again. Though I’ve worked my way through many Rails books, this is the one that finally made me “get” it.

Ruby QuickRef Table of Contents Language General Tips These are tips I’ve given over and over and over and over… Use 2 space indent, no tabs. Ruby on Rails 3.1 Release Notes 1 Upgrading to Rails 3.1 If you're upgrading an existing application, it's a great idea to have good test coverage before going in. You should also first upgrade to Rails 3 in case you haven't and make sure your application still runs as expected before attempting to update to Rails 3.1. Then take heed of the following changes: 1.1 Rails 3.1 requires at least Ruby 1.8.7 Creating a Typeahead Widget with AngularJS If you are starting an AngularJS project you might want to have all the components written in Angular. Although it’s certainly possible to reuse the existing jQuery plugins, throwing a bunch of jQuery inside a directive is not always the correct way to do things. My advice would be to first check if the same thing can be implemented with pure Angular in a simpler/better way. This keeps your application code clean and maintainable. This tutorial, targeted towards beginners, walks the readers through the creation of a simple TypeAhead widget with AngularJS. Overview

File: HAML_REFERENCE Haml is a markup language that’s used to cleanly and simply describe the HTML of any web document, without the use of inline code. Haml functions as a replacement for inline page templating systems such as PHP, ERB, and ASP. However, Haml avoids the need for explicitly coding HTML into the template, because it is actually an abstract description of the HTML, with some code to generate dynamic content.

Latest Free Screencasts from Screencasts.org Creating a Bookmarklet with Remote JavaScript Code → In this quick free JavaScript video tutorial we'll show you how to load in a remote JavaScript file in to a bookmarklet. View Episode → JRuby 1.5.0 Released: The Best Alternative Ruby Implementation Gets Even Better Following on five months after the release of the popular JRuby 1.4, the JRuby team have delivered JRuby 1.5! Forgetting the de facto "official" Ruby implementations of 1.8.x and 1.9.1/2, JRuby is the fastest and most stable Ruby implementation available and already has 9 years of progress under its belt. JRuby takes a lot of its performance and versatility from running on the Java Virtual Machine (JVM), which has provided JRuby's developers with a solid base from which to optimize how Ruby is implemented.