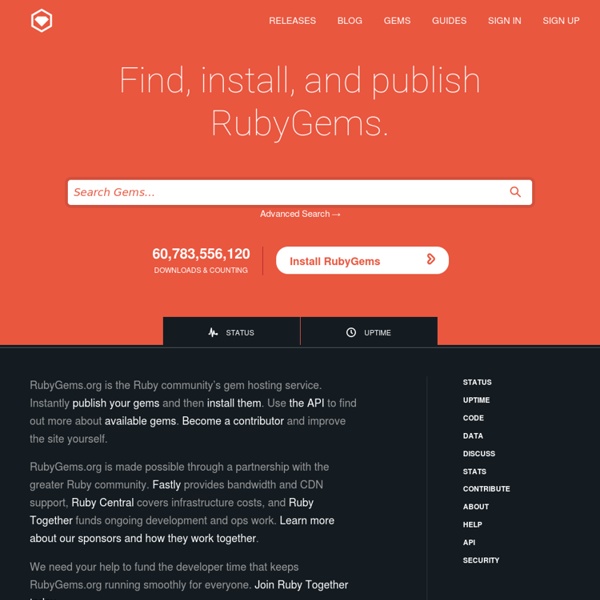 Global variables A global variable has a name beginning with $. It can be referred to from anywhere in a program. Before initialization, a global variable has the special value nil. Send Email Using Rails Advertisements Action Mailer is the Rails component that enables applications to send and receive e-mail. In this chapter we will see how to send an email using Rails. So lets start with creating a emails project using following command. This will create required framework to proceed. Ruby vs Python: Choosing Your First Programming Language: Course Report (updated August 2016) So you've decided to switch careers and jump into tech. Congrats! Now, you're probably wondering which programming language you should learn first!

GrandPerspective GrandPerspective is a small utility application for Mac OS X that graphically shows the disk usage within a file system. It can help you to manage your disk, as you can easily spot which files and folders take up the most space. It uses a so called tree map for visualisation. Each file is shown as a rectangle with an area proportional to the file's size. Files in the same folder appear together, but their placement is otherwise arbitrary. News

Learn Ruby The Hard Way If you did the Study Drills from the last exercise you should have seen all sorts of commands (methods/functions) you can give to files. Here's the list of commands I want you to remember: close -- Closes the file. Getting Started with Your Facebook App on Heroku facebook Table of Contents A Facebook app typically uses an SDK to interact with the Facebook API, using Facebook’s Graph API and FQL to retrieve and post information to Facebook. A Facebook application can easily be developed and deployed to Heroku (in any of Heroku’s supported languages) which has code that interacts with Facebook’s APIs in this manner. This guide is for Facebook developers who develop and deploy their applications on Heroku.

Ruby and the Sinatra framework Introduction DSL vs GPLGitHub RepositorySinatraHostingExample RequirementsSet-upShotgunLoading pagesLoading templatesStatic resourcesHandling errorsPerformanceHosting our applicationConclusions Introduction In my opinion there's isn't enough good information on the web about how to get started building a Ruby based website (unless you want to use the ever popular Ruby on Rails framework). But even then, it's not as straight forward as you'd think (not for someone new to the language or server-side coding in general).

How To Install Linux On A MacBook Pro Retina MacBook Pros come with some very nice hardware, but some people want more. Some people want Linux. Whether you’d like a more open and customizable operating system or simply need to dual-boot in order to access certain software, you might want Linux on your MacBook. The thing is, MacBook Pros are also pretty closed-down pieces of hardware that make installing other operating systems difficult – Linux more so than Windows.