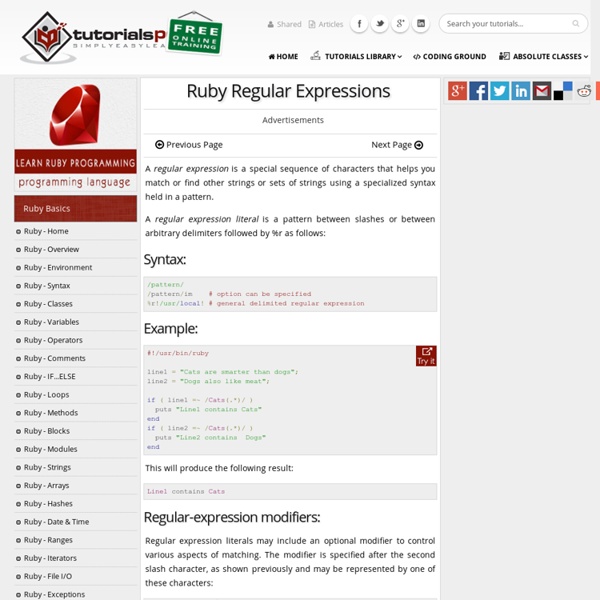 Regexp A Regexp holds a regular expression, used to match a pattern against strings. Regexps are created using the /.../ and %r{...} literals, and by the Regexp::new constructor. Regular expressions (regexps) are patterns which describe the contents of a string. A regexp is usually delimited with forward slashes (/). /hay/ =~ 'haystack' /y/.match('haystack') If a string contains the pattern it is said to match. /needle/.match('haystack') /hay/.match('haystack') Specifically, /st/ requires that the string contains the letter s followed by the letter t, so it matches haystack, also. The following are metacharacters (, ), [, ], {, }, ., ? /1 \+ 2 = 3\? Patterns behave like double-quoted strings so can contain the same backslash escapes. /\s\u{6771 4eac 90fd}/.match("Go to 東京都") Arbitrary Ruby expressions can be embedded into patterns with the #{...} construct. place = "東京都"/#{place}/.match("Go to 東京都") Character Classes¶ ↑ /W[aeiou]rd/.match("Word") /[0-9a-f]/.match('9f') /[9f]/.match('9f') Repetition¶ ↑ /(?

Regular Expressions - A Gentle User Guide and Tutorial A Regular Expression is the term used to describe a codified method of searching invented, or defined, by the American mathematician Stephen Kleene. The syntax (language format) described on this page is compliant with extended regular expressions (EREs) defined in IEEE POSIX 1003.2 (Section 2.8). EREs are now commonly supported by Apache, PERL, PHP4, Javascript 1.3+, MS Visual Studio, most visual editors, vi, emac, the GNU family of tools (including grep, awk and sed) as well as many others. Extended Regular Expressions (EREs) will support Basic Regular Expressions (BREs are essentially a subset of EREs). Most applications, utilities and laguages that implement RE's, especially PERL, extend the ERE capabilities and what are typically called PERL Compatible Regular Expressions (PCREs) have, largely, become a de facto standard. Implementation documentation should always be consulted in case some wierd Regular Expression variant is involved. Contents The title is deceptive. Simple Matching

regex - Regular Expressions: Is there an AND operator ruby on rails - Determine if a string is a valid float value Ruby Web Applications - CGI Programming Ruby is a general-purpose language; it can't properly be called a web language at all. Even so, web applications and web tools in general are among the most common uses of Ruby. Not only can you write your own SMTP server, FTP daemon, or Web server in Ruby, but you can also use Ruby for more usual tasks such as CGI programming or as a replacement for PHP. Please spend few minutes with CGI Programming Tutorial for more detail on CGI Programming. Writing CGI Scripts: The most basic Ruby CGI script looks like this: #! If you call this script test.cgi and uploaded it to a Unix-based Web hosting provider with the right permissions, you could use it as a CGI script. For example, if you have the Web site hosted with a Linux Web hosting provider and you upload test.cgi to the main directory and give it execute permissions, then visiting should return an HTML page saying This is a test. Using cgi.rb: Let's create a basic CGI script that uses cgi: #!