Ruby-Doc.org: Documenting the Ruby Language. Ruby Programming Language. Learn Ruby the Hard Way - Read for Free. Guides - RubyGems Guides. Hackety Hack! Why's (Poignant) Guide to Ruby. Read This Paragraph At my local Barnes and Noble, there is a huge wall of Java books just waiting to tip over and crush me one day. 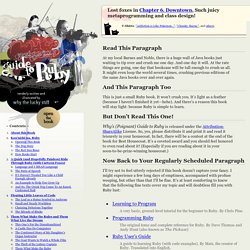 And one day it will. At the rate things are going, one day that bookcase will be tall enough to crush us all. It might even loop the world several times, crushing previous editions of the same Java books over and over again. And This Paragraph Too This is just a small Ruby book. But Don’t Read This One! Why’s (Poignant) Guide to Ruby is released under the Attribution-ShareAlike License. Now Back to Your Regularly Scheduled Paragraph I’ll try not to feel utterly rejected if this book doesn’t capture your fancy. Learning to Program A very basic, ground-level tutorial for the beginner to Ruby. Now, if you can’t seem to find the contents link on the left-hand side of the page, then here’s a link to the first page of the (Poignant) Guide. Welcome to the pirate radio of technical manuals. Ruby in Twenty Minutes. Introduction This is a small Ruby tutorial that should take no more than 20 minutes to complete. 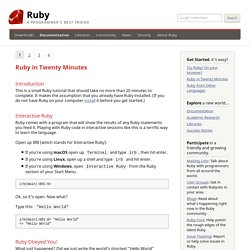 What just happened? Irb(main):002:0> puts "Hello World" Hello World => nil puts is the basic command to print something out in Ruby. Your Free Calculator is Here Already, we have enough to use IRB as a basic calculator: irb(main):003:0> 3+2 => 5. How and Where to Learn Ruby. By EmailShare 115EmailShare In an online chat session between Yukihiro Matsumoto and Keiju Ishitsuka in early 1993, a discussion ensued about the name of a programming language that Matsumoto was going to write. 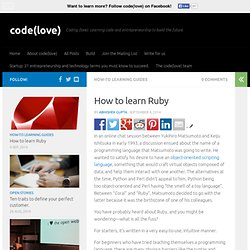 He wanted to satisfy his desire to have an object-oriented scripting language, something that would craft virtual objects composed of data, and help them interact with one another. The alternatives at the time, Python and Perl didn’t appeal to him, Python being too object-oriented and Perl having “the smell of a toy language”.

Between “Coral” and “Ruby”, Matsumoto decided to go with the latter because it was the birthstone of one of his colleagues. You have probably heard about Ruby, and you might be wondering—what is all the fuss? For starters, it’s written in a very easy-to-use, intuitive manner. For beginners who have tried teaching themselves a programming language, there are many obvious barriers like the syntax and semantics of a language. Install Rails 4.1 · Ruby on Rails Installation Guide. By Daniel Kehoe Last updated 17 December 2015 Install Ruby on Rails 4.2 on Mac OS X, Ubuntu, or Windows. 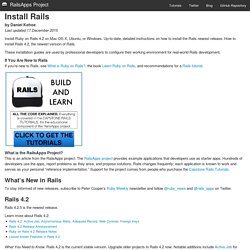 Up-to-date, detailed instructions on how to install the Rails newest release. How to install Rails 4.2, the newest version of Rails. These installation guides are used by professional developers to configure their working environment for real-world Rails development. If You Are New to Rails If you’re new to Rails, see What is Ruby on Rails? What is the RailsApps Project? This is an article from the RailsApps project. What’s New in Rails To stay informed of new releases, subscribe to Peter Cooper’s Ruby Weekly newsletter and follow @ruby_news and @rails_apps on Twitter.