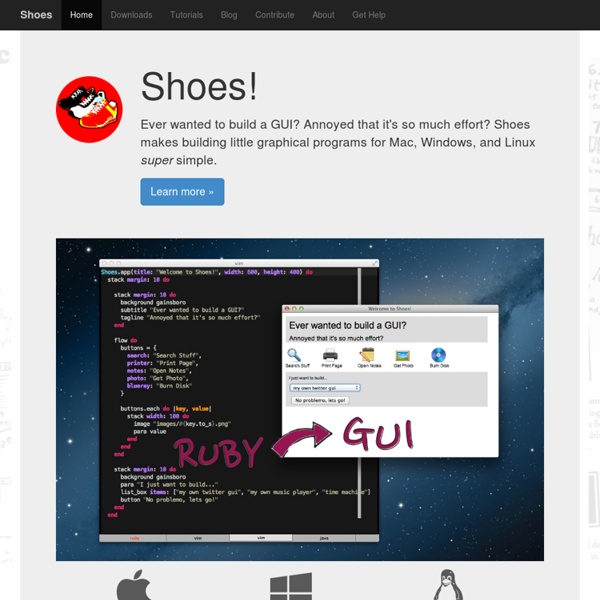 XML.com November 09, 2005 REXML (Ruby Electric XML) is the XML processor of choice for Ruby programmers. It comes bundled with the standard Ruby distribution. It's fast, written in Ruby, and can be used in two ways: tree parsing and stream parsing. 10 Free E-Books on Ruby for Beginners Ruby may have lost some of its shine in recent months to JavaScript and Node.js, but it's still one of the most popular programming languages out there, and it's still growing. There are a large number of beginner's Ruby resources out there, and the material is diverse. Here are a few places to get started. Hackety Hack This isn't actually an e-book, but an interactive tutorial. It runs on Windows, OSX or Linux.

Ruby Programming/Print version Ruby is an object-oriented scripting language developed by Yukihiro Matsumoto ("Matz"). The main web site for Ruby is ruby-lang.org. Development began in February 1993 and the first alpha version of Ruby was released in December 1994. Ruby Programming/GUI Toolkit Modules Ruby GUI toolkits are typically 3rd party GUI platforms that are driven (wrapped) by a Ruby driver. Ruby bindings are available for several widget toolkits, among them Tk, Gtk, Fox, and Qt. Here is a spreadsheet comparison.

Learn Ruby The Hard Way If you did the Study Drills from the last exercise you should have seen all sorts of commands (methods/functions) you can give to files. Here's the list of commands I want you to remember: close -- Closes the file. Like File->Save.. in your editor.read -- Reads the contents of the file. You can assign the result to a variable.readline -- Reads just one line of a text file.truncate -- Empties the file. Watch out if you care about the file.write('stuff') -- Writes "stuff" to the file.

Ruby and SciTE Daniela Robles (Guest) on 2012-11-11 20:58 Hi all, Ruby no longer comes together with SciTE, so I had to download the SciTE text editor separately. However, I find that Ruby and ScITE do not work together. The command line in Ruby won't run or find any programs that I create with the text editor. How do I get them to work together?

Build Your Own External Hard Drive Step 1: Choose the right enclosure Many newer drives employ SATA, which uses a much smaller connector (above). Older IDE drives connect via two rows of pins (below). Consider two key factors when choosing an enclosure: size and interface. Size is easy: If the drive came from a desktop PC, it's probably a 3.5-inch model—though, if it dates from the late '90s, there's a small chance it could be 5.25-inch. Using QtDesigner for Ruby Programming QtDesigner is a GUI designer for Qt. I'd like to try using it for ruby apps. 1. Preparation a.

Array (Ruby 2.2.0) ary & other_ary → new_ary click to toggle source Set Intersection — Returns a new array containing elements common to the two arrays, excluding any duplicates. The order is preserved from the original array. It compares elements using their hash and eql? methods for efficiency. [ 1, 1, 3, 5 ] & [ 1, 2, 3 ] [ 'a', 'b', 'b', 'z' ] & [ 'a', 'b', 'c' ] Introduction to Ruby Ruby is a powerful, flexible programming language you can use in web/Internet development, to process text, to create games, and as part of the popular Ruby on Rails web framework. Ruby is: High-level, meaning reading and writing Ruby is really easy—it looks a lot like regular English!Interpreted, meaning you don't need a compiler to write and run Ruby. You can write it here at Codecademy or even on your own computer (many are shipped with the Ruby interpreter built in—we'll get to the interpreter later in this lesson).Object-oriented, meaning it allows users to manipulate data structures called objects in order to build and execute programs.