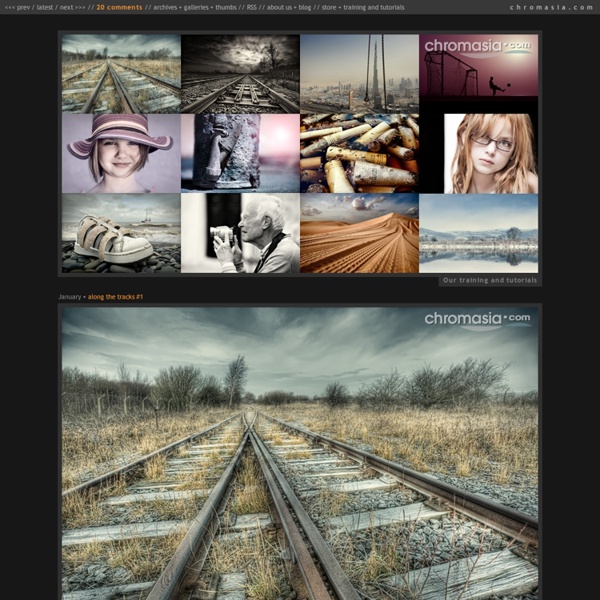 Happy New Year / 30 December, 2009 [click for previous image: let it snow #3] Happy New Year / 30 December, 2009 [click for next image: ringing in the new year] Title • Happy New Year I've spent the last couple of days wondering what to post to close out the year and then came across this entry on momentaryawe.com (run by my good friend Catalin Marin): his twelve favourite shots from 2009, one from each month. So, with credit to Catalin for the idea, here are my twelve favourites for the preceding year. Had I selected images from the year as a whole I suspect that there would be a couple of changes, and I also suspect that some of you would make different choices from each month, but when I looked back through the images I'd posted this year these are the ones that gave me most pleasure to produce. As always, let me know what you think. On a different matter: don't forget that there are just a few days left in which to snap up a 15% discount on our Photoshop tutorials.

The Metropolitan Museum of Art, New York - StumbleUpon The exhibition, organized by The Costume Institute, celebrated the late Alexander McQueen’s extraordinary contributions to fashion. From his Central Saint Martins postgraduate collection of 1992 to his final runway presentation, which took place after his death in February 2010, Mr. McQueen challenged and expanded the understanding of fashion beyond utility to a conceptual expression of culture, politics, and identity. His iconic designs constitute the work of an artist whose medium of expression was fashion. The exhibition featured approximately one hundred ensembles and seventy accessories from Mr. McQueen’s prolific nineteen-year career.

Create a Create a Magical Fantasy Image Effect in Photoshop In this tutorial, you will learn how to create create a magical fantasy picture effect in Photoshop. Program - Photoshop CS5 Assets - The following assets were used during the production of this tutorial: Pictures of Moments Speak More than Thousand Words...... Picture can speak thousands of words. Random pictures of insignificant moments always been the most important and most valuable. Photographers and painters beautifully imprint huge number of events, objects and types. OPTICAL ILLUSIONS and MOVIE POSTERS by Rowan Stocks Moore Rowan Stocks Moore ( England ) is the creator of these nice Disney posters. The movie posters were made with a ‘smart eye‘ which allows for the optical illusions to pop out. It’s not so easy to see them all, ’cause some of the optical illusions are ‘hidden’. Take a look ! Learn how to make your own optical illusion

25 Stunning HDR Wallpapers Credits (not in order): Trey Ratcliff, Others remain Unknown. If you are the owner or know the owner of any of theses HDR wallpapers, Please let us know. You are free to download these photos and enjoy them but you may not use them commercially. The copyright belongs to the respective photographers. What Does Your Handwriting Say About You? What Does Your Handwriting Say About You? graphology Graphology is the study of handwriting, especially when employed as a means of analyzing a writer's character, personality, abilities, etc. How you write can indicate more than 5,000 different personality traits. National Geographic Photo Contest 2011 National Geographic is currently holding its annual photo contest, with the deadline for submissions coming up on November 30. For the past nine weeks, the society has been gathering and presenting galleries of submissions, encouraging readers to vote for them as well. National Geographic was kind enough to let me choose among its entries from 2011 for display here on In Focus. Gathered below are 45 images from the three categories of People, Places, and Nature, with captions written by the individual photographers. [45 photos]