A Home For Media Artists 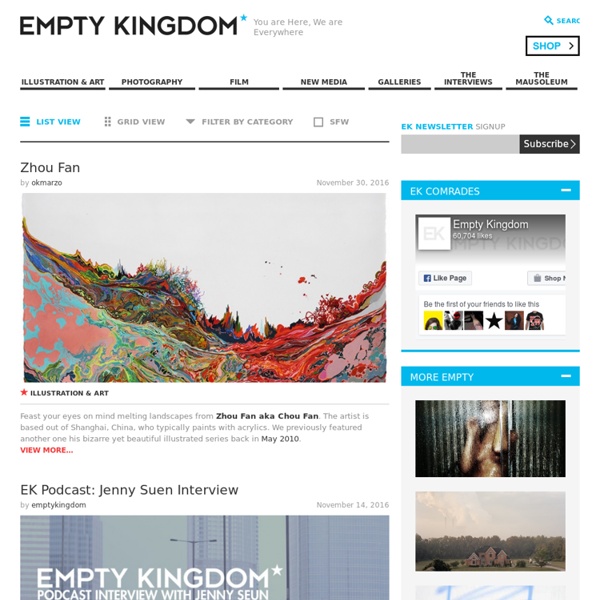 Stéphane Coutelle by okmarzo April 7, 2014 Stéphane Coutelle is a French photographer who has just released his latest series entitled 'Insomnies'. The intimate photos portray the beginnings of an untold story of women's wanderings. The pictures are shot in unspecified locations to carry a strong cinematographic dimension.

EMPTY KINGDOM TOP 100 Artists of 2013 [Photo by: Shelbie Dimond] 939 is the magic number for EK in 2013. 939 only has 4 factors: 1, 3, 313, 939…which doesn’t really have any significant meaning relating to our TOP 100. AMD made a CPU called the Socket 939 back in June 2004…but we’re not sponsored by them nor any other computer tech company to supply us with the machines that we need to run EK. The year 939 in Roman numerals is CMXXXIX…which doesn’t mean crap since none of us use Roman numerals anymore. According to HistoryOrb.com, 4 major events took place in year 939 that were documented:July 8th (The Major Occultation, or Ghaybat el-Kubra of Muhammad al-Mahdi),August 6th (Battle at Simancas – Spain beats Moors),October 2nd (Battle at Andernach: King Otto & Hermann of Zwaben beat Eberhard of France & Giselbert of Lutherans),October 27th (Edmund I succeeds Athelstan as King of England)…which all has nothing to do with EK.

50 Images from National Geographic`s 2010 Photo Contest Writen by Bogdan / Comments Off on 50 Images from National Geographic`s 2010 Photo Contest This is one of the most anticipated annual photo contests. The deadline for the submissions is on November 30th so if you have an interesting photo, submit it. Light Light's Sublime Levitating Lamps Posted by Ray | 30 Sep 2011 | Comments (9) Designer Angela Jansen of Design Academy Eindhoven recently collaborated with engineer Ger Jansen on a pair of skeuomorphic LED lamps that they're currently selling as Light Light. Their website knowingly notes that "It is uncommon for engineers to find good domestic applications for their technology... and it is likewise rare for designers of consumer objects to embrace cutting-edge technology wholeheartedly." Which, of course, is "perhaps what makes the cross-pollination of ideas between Angela Jansen and Ger Jansen so remarkable." The Light Light series creates an incredible visual conversation piece.

Rodeo Magazine source: AnniIsis (Malmö), Evelien (Terneuzen, The Netherlands), Dominika (Bratislava), Helene (London) Paper Flowers – Anyone Can Do That Japanese Kusudama, this tutorial is featured on Craftuts Anyone can do that, I assure you. The proof: I can, just take a quick look at my result below. And, believe me, I am neither meticulous nor particularly patient. You could even say I’m the opposite. Below you can see my very first attempt to create paper flowers. The Art Damien Hirst Stole Watch the video here. See press coverage and more info here. This article was published online by 3ammagazine.com and in print by The Jackdaw Sept/Oct 2010 issue. Read The Art Damien Hirst Stole Part 2 here

Gakuranman - illuminating Japan - StumbleUpon The ruins and haikyo aficionado in me couldn’t resist making a post about Tokyo Genso‘s fabulous art depicting post-apocalyptic Japan. The illustrations have a breathtaking otherworldly quality that perfectly capture the sort of scenes I regularly come across while exploring ruins, albeit of course, on a much grander and majestic scale. Some of the scenes really aren’t stretching the truth that much either. Top 33 World’s Strangest Buildings (sorted by 4.520 visitors votes) If you are bored panda like me, you know that the best way to fight boredom is finding all kind of weird stuff. And now, that you’ve found that page, you are just about to kill your boredom. Do you love architecture?

Tattoo Culture and Art Daily Posted on October 18, 2011 by lenny . Xoïl is a tattooer at Needles Side Tattoo in Thonon-les-Bains, France.