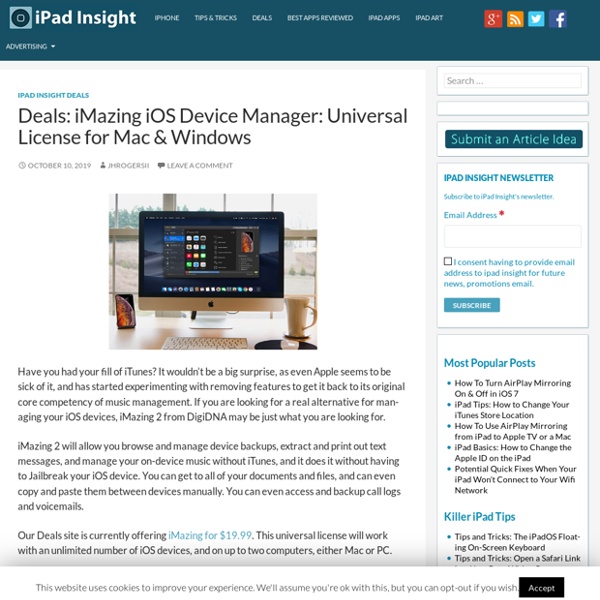 iPad apps are, and have always been, a big part of what makes the iPad such a powerful device. Great apps, and unique apps that you just don’t find anywhere else, are one of the hallmark features of the iPad. They have been since Day 1, and scores of great developers and publishers continue to produce apps that are exclusively for the iPad. Our weekly picks for Best iPad App of the Week are published here every Saturday. This week’s pick is Ancient Battle: Alexander, a very cool new strategy war game from Hunted Cow Studios. Hunted Cow have been bringing some excellent war games to the iPad for years now.

Roland Wolff: Leica Store and Gallery Los Angeles We sat down with Roland Wolff, Vice President of Marketing and Corporate Retail for Leica Camera, Inc., to discuss the grand opening of the Leica Store and Gallery Los Angeles. Roland is responsible for all Leica branded retail outlets in the Americas, including Leica boutiques and stores. Below, Roland gives us the inside scoop on what to expect from Leica’s newest retail location. Q: Where is the store actually located in L.A. and is there a particular reason you chose Los Angeles for Leica’s next store and gallery? IPad Tips & Tutorials Using the Back Button or Previous Page in the Safari Web Browser on the iPad A participant in my Master Class recently asked this question: How do I go “back” in Safari? Sometimes the “back” button works and sometimes it doesn’t. Here’s my reply: When you tap on a link on a webpage, one of two things generally happens: 1.

How to be a TERRIBLE iPad Teacher The following is a list, written in the first-person, of ideologies or stances from a Terrible iPad Teacher: 1. I own an iPad and I use it in class. I am, therefore, an effective Twenty-First century educator . Things in life don’t come easy. Nobody masters an educational tool overnight. 39 Sites For Using iPads in the Classroom Pages - Menu This Blog Linked From Here This Week in Photography History: The Birth of Dorothea Lange This week we celebrate the birth of Dorothea Lange and the photojournalistic work she documented throughout the Great Depression in America. Head on past the break for a quick peek into her life and career as a photographer. Born in Hoboken, New Jersey on May 26th 1895, Dorothea Lange – whose name was originally Dorothea Margaretta Nutzhorn before her father left the family and she assumed her mother’s maiden name- had quite a traumatic experience early in life that would become a defining moment; she contracted polio at age 7. This disease caused her right leg and foot to be noticeably weaker than the left, which would ultimately cause her to have a slight limp for the rest of her life. She would come to appreciate this ailment and had even said that “it was the most important thing that happened to me, and formed me, guided me, instructed me, helped me and humiliated me”. Sources:

10 Ways To Use Offline iPads In Education Just about every article on using iPads in education involves one key feature: connectivity. Whether it’s wi-fi or cellular service, being connected to the web is by far the most important feature for iPads in the classroom. Otherwise, it’s just what the tech-bloggers call a ‘brick’ and is essentially worthless. Quick List: iPad Resources For The Classroom One question that comes into my inbox or on Twitter a lot lately is one dealing with iPads. Many schools and classrooms all over are investing in these devices and educators want to know how to use them effectively, apps to consider and more. In keeping with the "My Favorite Resources" theme (last week I listed my favorite resources for talking about Twitter) here are my go-to resources when people ask me about iPads in the Classroom. ISTE iPad In Education Webinar Resources

iPad Classroom Next Term? – 10 Things to Consider If the iPad is making a ‘move’ on your classroom this year then these ten points are worth considering: Check your wireless network for everything from capacity to ‘dead-zones’. Leave no stone unturned as a failing wireless network will severely hamper iPad use in school.Be hands on with apps/methods you might ask students to use and see what it is like to produce ‘work’. The iPad is just a device and without an informed educator it will be ineffective as a learning tool.Set out clear behaviour guidelines and link them to school policy.

A new look at the Zeiss ZM 50mm Planar f/2 Lens A new look at the Zeiss ZM 50mm Planar f/2 Lens This is not a lens review, just a refresher of a lens I reviewed a few years back. The Zeiss Planar has been with me for a few days via LenRentals.com and I have enjoyed it so much I had to write down some thoughts about using it on the Leica M and MM. Enjoy! 28 iPad 2 Tips and Tricks Your new iPad 2 might not be as full-featured (or as complicated) as a laptop or desktop PC, but a few neat tricks are still hidden between the surface. Read on to learn how to secure your iPad, sync your bookmarks, and more. Download the free iPad User's Guide: You may have noticed that your iPad didn't come with a big printed manual--that's not Apple's style. However, you can download the PDF version of the iPad User's Guide from Apple's Web site, or you can read it in iBooks if you have that installed (iBooks is available as a free download in the App Store).

Edmodo is THE iPad Workflow Solution The world of iPad workflow just got a whole lot easier. After months of ‘work arounds’ involving screenshots, Dropbox and pre-tablet technology, the latest Edmodo update has changed the game. Put simply, you can now use the iOS6 function ‘open in app’, to open a document in Edmodo. This allows you to upload a document to your Edmodo library on an iPad. You can then link the document to a direct post, note or assignment within the Edmodo app.