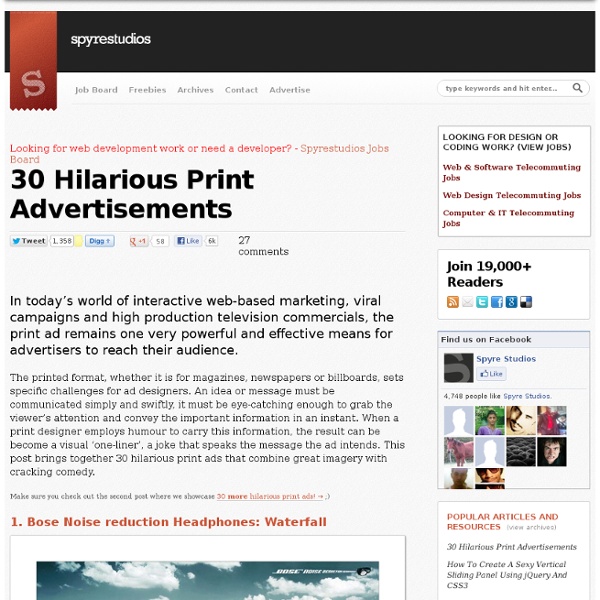 In today’s world of interactive web-based marketing, viral campaigns and high production television commercials, the print ad remains one very powerful and effective means for advertisers to reach their audience. The printed format, whether it is for magazines, newspapers or billboards, sets specific challenges for ad designers. An idea or message must be communicated simply and swiftly, it must be eye-catching enough to grab the viewer’s attention and convey the important information in an instant. When a print designer employs humour to carry this information, the result can be become a visual ‘one-liner’, a joke that speaks the message the ad intends. This post brings together 30 hilarious print ads that combine great imagery with cracking comedy. Make sure you check out the second post where we showcase 30 more hilarious print ads! 1. 2. 3. 4. 5. 6. 7. 8. 9. 10. 11. 12. 13. 14. 15. 16. 17. 18. 19. 20. 21. 22. 3M Scotch Magic Tape: Overload 23. 24. 25. 26. 27. 28. 29. 30.

Todays Front Pages | Map View Anyone seeking permission to use or reproduce the front page of a newspaper featured in our Today’s Front Pages online gallery must contact the newspaper’s publisher directly. U.S. copyright laws apply. To protect the Newseum’s agreement with the newspapers featured in the gallery, a watermark is occasionally instituted during news events of historic significance. The front page archives include dates of historical significance only. Tuesday, February 28, 2017 Share link_type: internal_linkexternal_url: 2292new_window: 0

Document Your Life & Improve Your Photography Skills With Shuttercal The concept of sharing daily photos is nothing new. Nancy wrote an article a few months back featuring 4 great photo websites, and we’ve covered sites like DailyBooth in our directory. However, if you are into taking daily photos and think the idea of calendar-based photography is pretty cool, you are going to love Shuttercal. In this article, I am going to walk you through the features of Shuttercal, highlighting everything that makes this website useful. Introducing Shuttercal I should point out that in Nancy’s article I alluded to earlier, Shuttercal had several favorable mentions in the comments. Shuttercal’s website also covers the ‘what’, ‘why’, and ‘how’ associated with using the service, which I will attempt to expand upon here. What Is Shuttercal? In its simplest form, Shuttercal is a calendar. Upon first signing up for the service, you are taken to your MyCal page, which is your personal calendar where you can begin taking on your photography project. Explore The Community Conclusion

Light Touch projector makes any surface a touchscreen A previously little-known company from the UK called Light Blue Optics has demoed a projector at CES which allows users to interact with the light image as if it were a touchscreen. The Light Touch throws a 10-inch image at WVGA resolution at incredibly short distances thanks to the holographic projection technology involved. At the same time the infra-red touch sensitive system allows users to interact with social networks, multimedia sharing and any other applications that can use the Wi-Fi or Bluetooth support in the device to connect to the Internet. It comes with 2GB of onboard flash memory, a microSD card slot for expanding the storage and the battery life will last 2 hours. UPDATE: Two years on and although Light Blue Optics doesn't seem to have come up with the goods, others have. - Prodigy projection keyboard iPhone case turns any surface into a keyboard

Ugly Vegas Carpets Want You to Keep Playing | Raw File Mathematician-philosopher Alfred North Whitehead once said, “It requires a very unusual mind to undertake the analysis of the obvious.” This certainly rings true with Chris Maluszynski’s Las Vegas Carpets series, whose name explains it all. The photos draw out the psychology of Las Vegas through the simple observation of carpet. Years ago, while in Las Vegas covering the World Series of Poker, Maluszynski found himself as enraptured by the drama unfolding below the tables as above them. Originally from Sweden, now based in New York, Maluszynski spent four years roaming Sin City’s kaleidoscopic corridors with his camera. “The carpets definitely play a big part in keeping the town as surreal as it is,” said Maluszynski by e-mail. That’s a theory backed up by Dave Schwartz, Director of the Center for Gaming Research, at the University of Nevada Las Vegas. Maluszynski exhibited Las Vegas Carpets in April and has no intentions to return to the series. All Images @Chris Maluszynski/MOMENT.

Pictures of Pennies Hi, I'm Mitch Fincher and these pages are from a talk I gave while a Civil Engineering student at Texas Tech University. The following is the basic pattern for building cantilevered structures with Pennies. Although it looks trivial, we can build amazing structures with these pillars. All penny columns are ten pennies high, a "stack". Now, I'll show you how to build a simple bridge. Carefully filling the space between with pennies, we create a one penny-span bridge. Repeating the process by putting an extra triad on top of each stack, we can create a two penny-span bridge. Although it looks weak, it will actually hold quite a bit of weight. We can move on to a three penny-span bridge. And finally to six and seven penny-span bridges. Click "Next" to move on to "The Big Tower". Submit your amazing coin stacking pictures. Note: All stacks of coins were done without any glue.

The Webtender: Drinking Games. Have fun with The Webtender's collection of drinking games, but be extremely careful if you play any these games, especially the ones with high buzz factors. The collection was created as an aid to responsible adults who know their limits (and not to cross them) when it comes to drinking, and not to promote this kind of drinking behavior. You should of course be of legal drinking age if you want to play these games with beer or drinks, but anyone can play these games with non-alcoholic beverages as well. For more fun, visit the Web Site Index and go to one of the sites listed there. Home · Drink Recipes · Forums · Bookstore · Barstore · Web Index · Feedback

DesignPorn On The Issues Magazine The Progressive Womans Magazine Winter 2011: The Rise... Is the ‘F’ word co-opted by conservatives & consumerist media? Where are real icons & core values? On The Issues Magazine, Winter 2011, considers feminist icons, feminist values and feminist cons. The Rise of Enlightened Sexism by Susan J. Douglas Today, we once again have what Betty Friedan famously called "a problem with no name." At the same time, these young women get the message loud and clear that the absolute last thing they should embrace is feminism. After reviewing the media fare geared to girls and women since the early 1990s, I came to see a rather large gap between how the vast majority of girls and women live their lives, the choices they are forced to make, and what we see -- and don't see -- in the media. What the media have been giving us then over the past fifteen years are fantasies of power. Today many young women regard feminism as the ideological equivalent of anthrax A New Brand of Sexism With women's equality supposedly won, sexist stereotypes are considered amusing

Erica Mulherin - Currently Illustrated Blog Currently Loving: Geninne's Los Mushrooms painting Elsa Mora's beautiful paper cut pumpkin Chloé Van Paris' All is Vanity image collection My friend and co-worker Diana gave me this student desk/chair and I am so loving it! Because the orientation of our house and several giant cedars, my living and dining area doesn't get much light despite having two huge windows. We have been trying to get in into tea recently. I am a little up in the air about this tea, it seemed a little too tannic and I am not sure if it's the tea or if I over brewed it or what. We have a fantastic tea shop downtown that has a dazzling variety of tea so I think I'll head back and try something else. We had our first fire of the season last weekend and it's comforting warmth was very much appreciated by all of us: Some more than others.