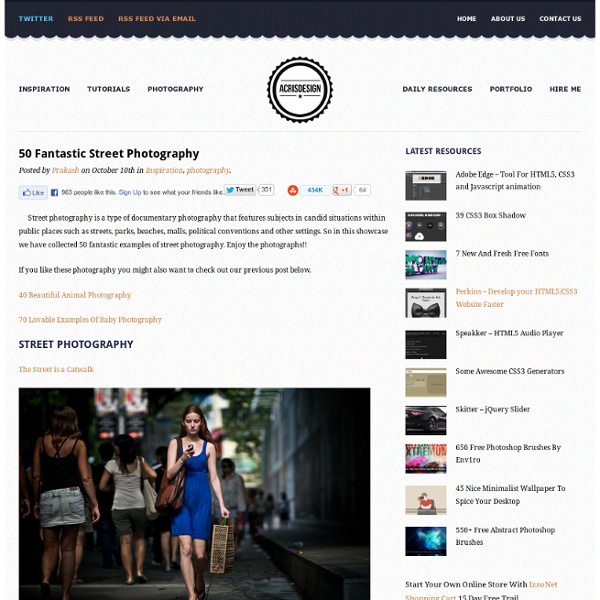 50 Years Ago: The World in 1961 - Alan Taylor - In Focus A half-century ago, much of the world was in a broad state of change: We were moving out of the post-World War II era, and into both the Cold War and the Space Age, with broadening civil rights movements and anti-nuclear protests in the U.S. In 1961, John F. Kennedy was inaugurated as the 35th president of the United States, Soviet cosmonaut Yuri Gagarin became the first human to fly in space, Freedom Riders took buses into the South to bravely challenge segregation, and East Germany began construction of the Berlin Wall. That year, Kennedy gave the okay to the disastrous Bay of Pigs Invasion into Cuba and committed the U.S. to "landing a man on the Moon" with NASA's Apollo program. JFK also oversaw the early buildup of a U.S. military presence in Vietnam: by the end of 1961, some 2,000 troops were deployed there.

Sci-Fi Tech: New Adobe Plugin Removes Photo Blur Adobe's new deblurring algorithm is like something out of science fiction There are two things that work with photos in sci-fi movies that still don’t work in real life. One is saying “enhance” to your computer and having it magically zoom in and conjure new pixels from nowhere. And the other one is removing the blur from an image. Thanks to the brainiacs at Adobe, the next version of Photoshop may actually take care of the second one. Above you see the before/after results of the new deblur tool (click to see it full-sized).

America: 50 States in 50 Photos - In Focus In the past, I've composed many photo essays that took viewers on virtual tours of distant countries. Today, I decided to do the same thing, but focus closer to home, collecting one recent photograph from each of the 50 states in the United States of America. The photographs are not necessarily meant to represent the whole of any state. They are simply interesting, noteworthy, beautiful, or otherwise caught my eye. 106 of the most beloved Street Art Photos - Year 2010 More info. More info. More Banksy on Street Art Utopia. More info. More 3D on Street Art Utopia. 40 Beautiful Examples of Bokeh Photography Inspiration by Bill Jones 16inShare I’m sure most of you have heard of the term bokeh. 50 Really Cool Random Images For Your Inspiration Over the past couple of months I’ve set a folder aside in my browser specifically for random pieces of inspiration that have caught my eye. Anytime I came across an image that I thought was rather cool, I dropped it in the folder. In no time the folder was bursting at the seams and now it’s time to dump my findings into the laps of my readers. Without further ado, here are 50 random images for your inspiration. Share this article: Twitter Facebook Google+

Art & Photography For some people, being human isn't good enough. There are people who are more interested in living in another realm and it's made "possible" thanks to various online games or even apps that allow you to "cartoon yourself" or "zombie yourself". I suppose everyone has day dreams about living in a different time period or [...] This may seem weird but I've often thought about what my "last meal" would be if I knew my time on this earth was running out. High Speed Liquid and Bubble Photographs by Heinz Maier It never ceases to amaze me: just when I think I’ve seen every possible permutation of an artform or technique—be it figurative sculpture, stop motion animation, or in this case, high speed photography—somebody comes along and manages to do something radically different. German photographer Heinz Maier says that he began taking photographs less than a year ago in late 2010. He claims to not know what direction he’s heading in just yet, right now he’s experimenting with macro photography, mostly insects, animals, and these delicate high speed water droplets. Personally, I think he’s found a great direction. There are so many things happening here to make these photographs simply outstanding: the lighting, the colors, the occasional use of symmetry in the reflection of water, let alone the skill of knowing how to use the camera itself. It’s hard to believe these aren’t digital.

Awesome Photographs of Italy www.incrediblesnaps.com is coming up with awesome photographs of Italy. Italy is located in Southern Europe. Italy is one of the most developed country and the citizens enjoy very high standard lifestyle. Italian is an official language of Italy’s Roman Catholicism is largest religion in the country, although the Catholic Church is no longer officially the state religion. The Comprehensive Water Drop Photography Guide Not a long while ago the net was exploding with Corrie White’s Fun with Water set on Flickr. Her control over those drops, their color and their timing was remarkable indeed. This is why I am very exited to share Corrie’s very extensive guide for water drops photography.