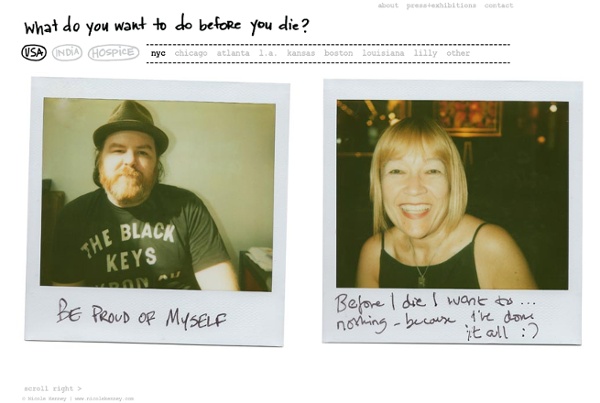 Airplane Travel Tips - 100 Words or Less - Gadling Don't take sleep aids until you're in the air - Airplane tip by Melanie Linn Gutowski (RSS feed) on Aug 9th, 2010 at 11:16AM Though it may seem appealing to sleep through those long waits on the tarmac, avoid the temptation to take a sleep aid until you're up in the air. You may miss important announcements, or, worse yet, you may be asked to disembark and wait for a later plane. 7 costly mistakes that can ruin your retirement The state of retirement readiness is on shaky ground. In a recent report by the Transamerica Center for Retirement Studies, only 39 percent of those surveyed reported they were building a large enough nest egg for retirement. More than half of the survey respondents plan to work past age 65, with nearly as many planning to work after they retire. The good news is that preparing for retirement is not complicated.

Top five regrets of the dying There was no mention of more sex or bungee jumps. A palliative nurse who has counselled the dying in their last days has revealed the most common regrets we have at the end of our lives. And among the top, from men in particular, is 'I wish I hadn't worked so hard'. Bronnie Ware is an Australian nurse who spent several years working in palliative care, caring for patients in the last 12 weeks of their lives. She recorded their dying epiphanies in a blog called Inspiration and Chai, which gathered so much attention that she put her observations into a book called The Top Five Regrets of the Dying. Miscellaneous Symbols (Unicode block) Miscellaneous Symbols is a Unicode block (U+2600–U+26FF) containing glyphs representing concepts from a variety of categories, astrological, astronomical, chess, dice, musical notation, political symbols, recycling, religious symbols, trigrams, warning signs, and weather, among others. Tables[edit] Definitions[edit] Images[edit] See also[edit] External links[edit]

Bucket List: 225 Things to Do Before You Die 136. Climb to the Top of the Leaning Tower of Pisa Located in the Italian city of Pisa (Tuscany, Italy) behind a really, really old cathedral, the Leaning Tower of Pisa is a 186ft-for-the-love-of-God-don’t-let-it-fall freestanding bell tower (‘campanile’) that leans an almost uncomfortable 3.99 degrees. In other words, the top of the tower is displaced horizontally some 12-ft from a (normally) perfectly-plumb (vertical) stance. It has two sets of stairs—one with 296, the other with 294 steps—and offers a pretty awesome view of Pisa from the top. 137.

Travel apps that really help Travel apps can help smooth bumps along the way. Hotel Tonight connects travelers with last-minute rooms at discounted ratesThe Taxi Magic app dispatches cabs directly to youFrequent fliers should have airline apps for their preferred carriers Editor's note: Brett Snyder is the founder of air travel assistance site Cranky Concierge, and he writes the consumer air travel blog The Cranky Flier. This is part of "Our Mobile Society," CNN's weeklong series examining how cell phones and other electronic devices have revolutionized the ways we work, play and communicate. 9 Things You Realize After You Die Annie Kagan – OmTimes | Three weeks after he died, my brother Billy woke me at sunrise and began describing what was happening to him in the afterlife. At first I thought that grief was causing me to imagine his voice. But as my brother began sharing cosmic secrets with me, secrets I couldn’t ignore, I became his student. Billy taught me that when you’re born, that big pop gives you a kind of amnesia.

P E R C E I V I N G R E A L I T Y Five spectacular art fair cities A security guard stands next to a sculpture by American artist Jeff Koons at The European Fine Art Fair, or TEFAF, on March 14. The fair takes place every year in Maastricht. London hosts several noted art fairs, including Masterpiece London, Frieze Masters and Frieze London, seen here in 2010. A visitor looks at an installation by Iraqi artist Azad Nanakeli inside the Iraqi pavilion during the 54th International Art Exhibition in Venice in 2011.The Venice Biennale takes place during odd-numbered years.