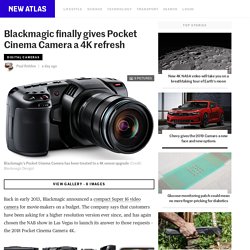 "We've listened and built a camera that combines all of our newest ideas and customer feedback from the previous model. " The most notable upgrade on the 2013 original is the Four Thirds HDR sensor, which now has 4,096 x 2,160 native resolution, 13 stop of dynamic range and low light-friendly dual native ISO up to 25,600. Blackmagic says that the full size sensor should mean a "greatly reduced" crop factor when the new Pocket Cinema is used with Micro Four Thirds lenses, leading to a wider field of view. The MFT mount is the same kind as used on the 2013 original, so users can dive into their existing kit bag for lenses they already have or use adapters to expand into Canon, Nikon, Pentax and Leica glass territories. The Pocket Cinema Camera 4K is capable of recording 4K video at up to 60 frames per second, or crop to 1080p at 120 fps. 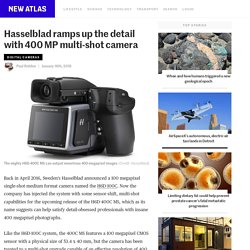 Now the company has injected the system with some sensor-shift, multi-shot capabilities for the upcoming release of the H6D-400C MS, which as its name suggests can help satisfy detail-obsessed professionals with insane 400 megapixel photographs. Like the H6D-100C system, the 400C MS features a 100 megapixel CMOS sensor with a physical size of 53.4 x 40 mm, but the camera has been treated to a multi-shot upgrade capable of an effective resolution of 400 megapixels in 6-shot image capture mode, 100 MP in 4-shot mode or 100 MP in single shot mode.

To produce those headline-grabbing 400 MP photos, the camera's sensor and mount are moved by a full pixel for the first four images to ensure full color data capture and then the sensor is returned to its home position before a further move of half a pixel horizontally and then half a pixel vertically completes the sequence. Welcome to the World, L16. Sony a9 first impressions: This imperfect world doesn't deserve a camera this good. Sony's new flagship, the powerhouse a9, has arrived at New Atlas HQ as the most highly anticipated piece of camera gear we've ever laid our hands on. 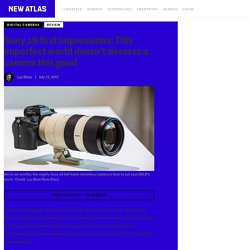 It may be the most advanced camera you can currently buy; a full-frame mirrorless monster designed to prove that the days of the DSLR are numbered. With a full review in the works, here are a few things that have blown us away in our first couple of days with it. The burst speed is ridiculous How fast is burst speed on the a9? Hasselblad now has a 100-megapixel 4K-shooting medium format camera. When Phase One announced it was launching a 100-megapixel CMOS full frame medium format back for its XF system, we didn't think it would be too long before Hasselblad responded. 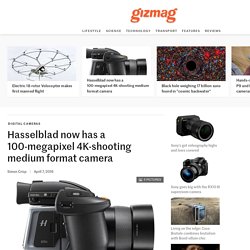 The new H6D is that response, and the Swedish firm says the camera, which comes in 50 and 100-megapixel options and can shoot video at up to 4K resolutions, has been rebuilt with an all-new electronic platform. Rather than simply improving on the existing H5D camera, Hasselblad says it has gone back to the drawing board with the H6D, with the result being an all-new medium format camera which offers a number of improvements, while retaining the modularity medium format that users expect.

Hands-on: Sony’s A6300 is even faster than we expected. When Sony announced its A6300 mirrorless camera, it promised a significant performance boost over the popular A6000, and it looks like it was spot on. 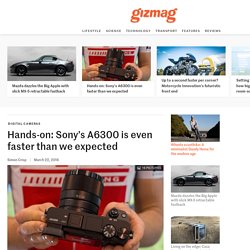 As we found out when we had an brief hands-on with the camera at the UK Photography Show 2016, it is blisteringly fast compared to its predecessor, and considerably quicker than many of its rivals. Hands-on: The Olympus PEN-F is about more than its retro good looks. When the Olympus PEN-F was announced, we said it was one of the best-looking cameras we'd seen in quite a while, and couldn't wait to get our hands on one. 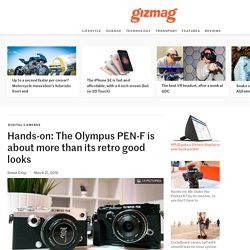 Well now, after spending a bit of quality time with the mirrorless shooter at the Photography Show 2016 in Birmingham, we're even more smitten, because the camera appears to have a personality to match its looks. Olympus followed in Fujifilm's footsteps by giving its mirrorless cameras a retro-styling, but its attempts arguably fell short of the standard set by the Fujifilm X100 and X-Pro lines of cameras. Now the firm has finally got it right, and the PEN-F is the camera we'd hoped the PEN E-P5 would be when it was launched to celebrate the 50th anniversary of the classic camera. The Olympus PEN-F comes in two color options, silver or black, and while the silver looks better on the page, in person the black offering has a more classy feel to it.

This personal cloud stores your photos with easy mobile syncing, AI and facial recognition. When it comes to storing digital photos, looking for one particular image amidst potential tens of thousands can be daunting. 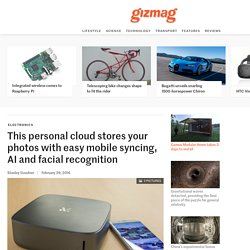 A (currently crowdfunding) personal cloud, Monument, may be able to assist casual and professional shutterbugs alike, as it's designed with advanced algorithms that store, organize, and analyze photos and videos for simple, secure access. While online cloud services that offer to keep all images/videos taken by your connected mobile devices are convenient, there is a limit to the amount of free space provided before subscription tiers need to be considered (Google Photos is a notable exception, as long as you don't mind downsampling of your highest-resolution photos). The Monument personal cloud device is designed to allow full, flexible control over personal storage by letting users plug in their own external USB drives. 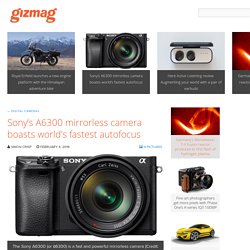 The newly-announced A6300 not only boasts the world's fastest autofocus in its class, but also offers continuous shooting at 11 fps (frames per second) and 4K movie recording in Super 35 mm format. 16 cameras in one: Light promises smartphone size and DSLR image quality. Light is a new silicon valley startup that’s focused on the holy grail of photography. 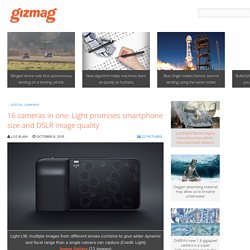 A camera the size of a smartphone, that takes photos the quality of a 52-megapixel DSLR, zooms optically between 35 and 150mm, shoots great images in low light, and lets you select focus and depth of field after you shoot. It sounds like more than one camera can handle – and that’s because it’s actually 16 cameras in one. The Light camera squeezes in 16 tiny smartphone-type cameras, each with its own inexpensive small lens at focal lengths between 35 and 150 mm. When you take a shot, up to 10 of these cameras fire at once, focusing on different points and taking different exposure levels. After you shoot, the output of those 10 cameras is combined in an imaging algorithm, creating a much larger photo than an individual small sensor could handle, and a wider dynamic range than your typical smartphone sensor could produce by itself. 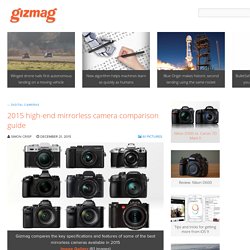 High-end mirrorless shooters can now hold their own with top-notch image quality, features and build quality, often leaving their DSLR brethren looking bulky and out of date. Here Gizmag compares the key specs and features of some on the best mirrorless cameras on the market in 2015. There are plenty of mirrorless cameras out there vying for a place in the kit bags of enthusiasts ad professional photographers. As such we've had to pick out favorites, this doesn't mean any excluded cameras might not be the right option for you.

The cameras we'll be comparing are: Zeiss to launch three high-performance iPhone lenses. There's no shortage of smartphone camera accessory lenses out there. But when a respected lens manufacturer like Zeiss joins the market, it's worth taking notice. The firm has used CES to announce that in partnership with ExoLens, it will launch three high-performance iPhone lenses this year. The lenses will include a wide-angle, a telephoto and a macro, and will all mount to iPhones via a screw thread on an ExoLens machined aluminum bracket. All of the lenses also incorporate the Zeiss T* antireflective coating, which helps to minimize reflections and improves the transmission of light. Zeiss says that the 0.6x wide angle (giving a 18-mm equivalent) and 2x telephoto (56-mm equivalent) use an afocal optical design, which is different to traditional interchangeable lenses for system cameras.

Canon's new four million ISO video camera leaves nothing in the dark. Ever been poking around in low-light with your camera and thought, "you know what, I could really do with an extra few million ISO"? To be honest, neither have we because such a light-sensitivity would be ludicrous for most users. Camlet Mount connects a smartphone or tablet to your DSLR. The integration of cameras in smartphones and tablets has seen many become accustomed to the oversized viewfinder provided by such mobile devices. But such devices can't compete with dedicated DSLRs or mirrorless cameras when it comes to image quality and features, which is why Vancouver-based Camlet Products and New York-based IC Art NY have created the Camlet Mount to connect a mobile device to your camera. View all The mount, which is the subject of a crowdfunding campaign, connects to any standard camera hot shoe. Once the mobile device is strapped in, you can not only compose shots, but also interact with the controls on your camera through its touchscreen.

Captured images can be saved to both the camera and the mobile device, and edited right on your phone or tablet. Venture Stars. Venture Stars beschäftigt heute über 200 Mitarbeiter in allen Portfolio-Unternehmen. Konost wants to release a full frame digital rangefinder. US start-up Konost has announced plans to launch a full frame digital rangefinder which it thinks could rival the likes of Leica. The Konost FF will be an M-mount camera which achieves digital rangefinder focusing by using a secondary image sensor rather than a traditional rangefinder mechanism. Other features of the aluminum-bodied camera include a 20-megapixel CMOS sensor and a 4-inch LCD rear monitor.

View all One of the most interesting features of the Konost FF is the way in which it achieves digital rangefinder focusing. Rather than using a traditional rangefinder mechanism, the camera instead features a secondary image sensor, the round window next to the lens. This approach cuts manufacturing and maintenance costs, while still allowing users to compose shots using the optical viewfinder, and manually focus the camera in typical rangefinder fashion by ensuring the images line up with each other. Nikon Coolpix P520 Digitalkamera 3,2 Zoll schwarz: Amazon.de: Elektronik.

Sigma announces world's first F1.8 constant aperture zoom lens - (Private Browsing) The Sigma 18-35mm f/1.8 DC HSM Art is the world's first F1.8 constant aperture zoom lens Image Gallery (2 images) Third-party lenses are sometimes looked down upon by the sort of photographers who insist you can only take a good photo if your lens says Canon or Nikon on it. But, not only do some outperform their branded counterparts, others do something which mean they don't even have first-party rivals.

The new Sigma 18-35mm F1.8 DC HSM Art, for example, is the world's only zoom lens to achieve a maximum aperture F1.8 throughout the entire range. Most constant aperture zooms, even those targeted at pros, peak at F2.8 – with exceptions including the Olympus 14-35 mm F2. Sony announces new waterproof Handycam - (Private Browsing) Big O brings LCD viewfinder window to Outex DSLR housing system. While DSLRs give photographers great creative freedom and image quality, the cameras themselves don't cope too well with being exposed to excessive amounts of sand, mud, water or snow – which can be a pain if you get your kicks from shooting things like extreme sports.

Outex is a weather and modular waterproof housing system for DSLRs that works much like a drysuit for your camera, and can protect your gear underwater to a depth of 10 meters (33 feet). SteadyWheel takes a circular approach to stabilizing video. Skink Pinhole Pancake Objektiv Pro Kit Leica M M6 M5 MP. Hinweis: Ihr Gebot ist bindend. Fujifilm launches M-mount adapter for X-Pro1's X-mount. Peak Design looks to put cameras on a Leash.