Sea and Sky - Explore the Oceans Below and the Universe Above 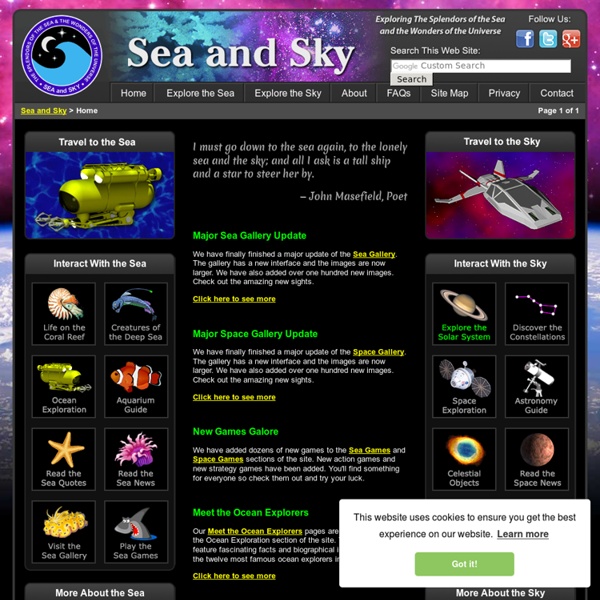 Christmas Traditions, Christmas History, Christmas Around the World, The Christmas Story and Christmas Fun and Games! - whychristmas?com Introduction to Shark Evolution, Geologic Time and Age Determination Sharks are one of evolution's most enduring success stories. Although they have few hard parts that can survive the insults of geologic time, sharks have left a long and rich fossil record. Some 2,000 to 3,000 species of fossil shark have been described. A 'fossil' is any remains, trace, or impression of ancient life, preserved in rock. Shark teeth provide paleontologists an unusual suite of advantages and drawbacks. Cleaned and dried jaws of the closest living ancestor of Hemipristis serra, the Snaggletooth Shark (Hemipristis elongatus). If a fossil tooth is well-preserved, it affords numerous characters that can be used to identify the species (or at least the basic taxonomic group, such as genus, family, or order) to which it belongs. A deformed fossil tooth of Carcharocles megalodon. No matter how well preserved, individual teeth cannot display the full range of variability in a given shark species. Most fossil shark teeth are found as isolated specimens.

Black swallower The black swallower, Chiasmodon niger, is a species of deep sea fish in the family Chiasmodontidae, notable for its ability to swallow fish larger than itself (for which it is sometimes named the "great swallower"). It has a worldwide distribution in tropical and subtropical waters, in the mesopelagic and bathypelagic zones at a depth of 700–2,745 m (2,300–9,000 ft).[1] Description[edit] A small lower spine occurs on the preoperculum. Feeding[edit] The black swallower feeds on bony fishes, which are swallowed whole. Black swallowers have been found to have swallowed fish so large, they could not be digested before decomposition set in, and the resulting release of gases forced the swallower to the ocean surface. Reproduction[edit] The larvae and juveniles are covered in small, projecting spinules.[7][8] References[edit] ^ a b Froese, Rainer and Pauly, Daniel, eds. (2009).

ReefQuest Centre for Shark Research Home Free Keyboards The History of Sound Cards and Computer Game Music | MacGateway Jul 13, 2012 All modern computers have the ability to play high-quality digital sound, thanks to the presence of a dedicated sound card or an audio chip on the motherboard. Today’s computers produce lifelike, realistic audio, enabling us to listen to digital music collections, watch online videos and play action-packed games. However, the audio capabilities of today’s computers are the culmination of decades of development, and it took a significant contribution from the computer game industry to get us here. Without that contribution, anyone who isn’t a professional musician might still be listening to little more than beeps on his or her computer today. Table of Contents 1981: PC Speaker If you had an IBM PC computer or a 100-percent compatible clone between 1981-1988, you were most likely listening to — or cutting the wires of — your computer’s internal speaker. Listen to the PC Speaker Silpheed (1988) J. Composed by Charles Deenen and Kurt Heiden. Space Racer (1988) Unknown composer.

21 Terrifying Deep Ocean Creatures Scary Seas: 21 Terrifying Deep Ocean Creatures Article by Marc, filed under Destinations & Sights in the Travel category. The last true frontier on Earth is deep in the ocean. Any expedition to the dark depths is incredibly expensive, yet invariably comes back with a host of newly discovered species that are about as alien to land dwellers as it’s possible to get on this planet. (Images via thedailygreen, seasweetie, wikipedia, uncommondescent, weird-funnythings) The Kiwa is a blind, furry crab that resides 5,000 feet below the surface of the ocean. (Images via thedailygreen, unknownskywalker, xcitefun, fuckyeahstrangecreatures) This marvelous creature looks like a jellyfish, but it’s actually a sea cucumber called the Pink See-through Fantasia. (Images via mongabay, oceancaresolutions, listverse, seaslugforum) This snailfish’s fins look wing-like and majestic, but the only flying it will do is 7,000 feet underwater. (Images via rocketboom, thetruthbehindthescenes, yahoo, whentalking)

40 Pictures of Airplanes Breaking the Sound Barrier Supersonic speed is a rate of travel of an object that exceeds the speed of sound (Mach 1). For objects travelling in dry air of a temperature of 20 °C (68 °F) this speed is approximately 343 m/s, 1,125 ft/s, 768 mph or 1,235 km/h. A sonic boom is the sound associated with the shock waves created by an object traveling through the air faster than the speed of sound. Sonic booms generate enormous amounts of sound energy, sounding much like an explosion. So that means that the sound source (in this case an airplane), will pass by a stationary observer (like yourself) before they actually hear the sound it creates. Below you will find a gallery of incredibly fast and expensive airplanes breaking the sound barrier and thus travelling at supersonic speeds. Off the coast of Pusan, South Korea, July 7, 1999 — An F/A-18 Hornet assigned to Strike Fighter Squadron One Five One (VFA-151) breaks the sound barrier in the skies over the Pacific Ocean. ATLANTIC OCEAN (April 17, 2008) Capt.

Gödel and the limits of logic June 2006 The man in the photograph on the right looks formal, reserved and somewhat undernourished. His face and his writings are unfamiliar to most, except for a few philosophers and mathematical logicians. He was Kurt Gödel, celebrated for his incompleteness theorems, the implications of which are far-reaching for the foundations of mathematics and computer science. The story of his life and work is that of a persistent quest for rationality in all things, pursued against a background of recurrent mental instability. Gödel proved that the mathematical methods in place since the time of Euclid (around 300 BC) were inadequate for discovering all that is true about the natural numbers. Mr Why Born on April 28, 1906, in Brno, Moravia, Gödel was the second of two children of Rudolf and Marianne Gödel, expatriate Germans whose families were associated with the city's textile industry. The reticent genius In 1924 Gödel left his homeland to enrol at the University of Vienna. Moment of impact