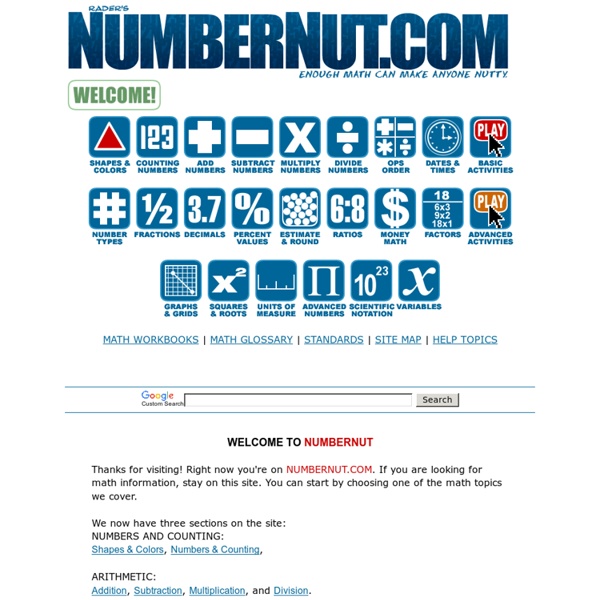 Neuroscience For Kids The smell of a flower - The memory of a walk in the park - The pain of stepping on a nail. These experiences are made possible by the 3 pounds of tissue in our heads...the BRAIN!! Neuroscience for Kids has been created for all students and teachers who would like to learn about the nervous system. Discover the exciting world of the brain, spinal cord, neurons and the senses. Can't find what you are looking for? Portions of Neuroscience for Kids are available in Spanish, Slovene, Portuguese, Italian, Korean, Japanese, Serbian, Russian, Slovak, Romanian, Polish, Albanian, Czech, Finnish, Estonian, Hungarian, Punjabi, Indonesian, Malay, Norwegian, Ukranian and Turkish. "Neuroscience for Kids" is maintained by Eric H.

SciVee | Making Science Visible 60 Ways RAND Has Made a Difference In 2008, the RAND Corporation celebrated its 60th anniversary. The difference between RAND today and the organization that was created in 1948 is substantial and dramatic. Most notably, we started with one client — the U.S. Air Force. The mix of studies, singular accomplishments, and streams of research and analysis included in this book exemplifies the range and originality of RAND research. RAND's 60 years have been distinguished by an impressive number of prominent, even famous, experts in various fields, including winners of the Nobel Prize in several disciplines. Major breakthroughs usually cannot be seen as such until so much history has passed that lots of other people have long since taken or been given credit. In the early days of RAND, much of our research was not widely available. In assembling this collection, we have enjoyed reflecting on various aspects of our legacy. Michael D.

The blood-brain barrier in a live zebrafish embryo | 2012 Photomicrography Competition Dr. Jennifer Peters’ and Dr. Michael Taylor’s winning image of the blood-brain barrier in a live zebrafish embryo perfectly demonstrates the intersection of art and science that drives the Nikon Small World Competition. The blood-brain barrier plays a critical role in neurological function and disease. Drs. To achieve this image, Peters and Taylor used a maximum intensity projection of a series of images acquired in the z plane. Both Peters and Taylor have more than ten years of imaging experience. Teachers | STEM Education Resource Center Welcome to PBS Teachers STEM Education Resource Center! Science, Technology, Engineering and Math (STEM) Resources for Grades PreK-12 PBS offers all Americans the opportunity to explore new ideas and new worlds related to science, technology, engineering, and mathematics (STEM) learning through television and online content. Explore some of our great STEM offerings for grades PreK-12. NOVA Science Now: The Secret Life of Scientists, "Becoming the Professor". Through many of our award-winning STEM-related television programs – NOVA, NATURE, CYBERCHASE, CURIOUS GEORGE, and SID THE SCIENCE KID – PBS continues to play its historic role as both a standard-bearer and innovator in digital content and professional development guided by research and actively supporting classroom teachers, home educators and childcare providers. The PBS Teachers STEM Education Resource Center is here to introduce you to selected STEM education resources. STEM Education News Additional Resources

<Advanced Lab Teaching Resources> This page provides a map to our online teaching resources for advanced laboratories at Haverford College Physics. We have three labs that effectively fall in this category. Most unusally, our sophomore-level labs cover much of the material usually taught in Jr. lab. Our majors then take a semester of upper-level junior or senior level advanded lab. The sophomore labs have standard writeups (see below), while our advanced electronics and computer instrumentation lab is taught out of prerelease copies of the new version of Art of Electronics Lab Manual (courtesy of Tom Hayes, Harvard University), and our advanced lab course per se is project based and students do not have writeups to work off of. Suzannne Amador Kane I also maintain a website with more information about medical physics-related labs. Sound Lab (intro level) We also have a related curriculum on science ethics that I will be posting shortly. AAPT listserv on advanced lab materials This course meets weekly for 3 hours per week.

The Physics Classroom Surprises in steel: The mystery behind Detroit entrepreneur's revolutionary Flash Bainite A Detroit entrepreneur surprised academics when he invented a heat-treatment that makes steel 7 percent stronger than any steel on record – in less than 10 seconds. That steel, now trademarked as Flash Bainite, has tested stronger and more shock-absorbing than the most common titanium alloys used by industry. Now Gary Cola is helping researchers at Ohio State University to better understand the science behind the new treatment, called flash processing. What they've discovered may hold the key to making cars and military vehicles lighter, stronger, and more fuel-efficient. In the current issue of Materials Science and Technology, the inventor and his Ohio State partners describe how rapidly heating and cooling steel sheets changes the microstructure inside the alloy to make it stronger and less brittle. "Steel is what we would call a 'mature technology.' Yet, when inventor Gary Cola initially approached him, Babu didn't know what to think. Cola's entire process took less than 10 seconds.

axioms Contents Contents | rgb Home | Philosophy Home | Axioms | Other Books by rgb: | The Book of Lilith | Axioms is a work that explores the true nature of human knowledge, in particular the fundamental nature of deductive and inductive reasoning. The way out is to give up the idea of certain knowledge. Axioms by Robert G. Dedication This book is dedicated to the giants of mathematical and scientific philosophy upon whose backs it stands: Plato, Hume, Descartes, Gödel, Bayes, Shannon, Cantor, Cox, Jaynes, and many more, too many to count, actually. It is also dedicated to my philosophy professor and guru at Duke, George Roberts, who had an enormous impact on me as I pursued an ``invisible'' philosophy major at Duke to accompany my physics major (invisible because at the time Duke had no way of acknowledging the completion of a Bachelor of Science in one discipline and a Bachelor of Arts in another). No book is written in a vacuum. Notice Copyright Notice Copyright Robert G. Lulu Press www.lulu.com

NOVA Why Did NASA Kill Cassini? On September 15, 2017 NASA destroyed Cassini—on purpose. Why kill a multibillion-dollar spacecraft? Sep 20, 2017 Death Dive to Saturn Follow Cassini's final days as it skims the cloud tops before plunging into the planet. Commentary: Unsolicited and Unwelcome, Climate Denial Comes to Schools In mid-March of 2017, I saw the first indications of trouble. From Education Blog | Sep 19, 2017 Cassini's Search For Life Is there life beyond Earth? Sep 15, 2017 Amazing Discoveries from Cassini Relive Cassini's greatest hits from its 13 years studying Saturn. Saying Goodbye to Cassini Cassini, a brave explorer that was dispatched to study a distant ringed world, has died. What Saturn Can Tell Us About Earth—and Beyond After Friday’s crash landing into Saturn, NASA scientists are reflecting on the lessons Cassini has imparted.