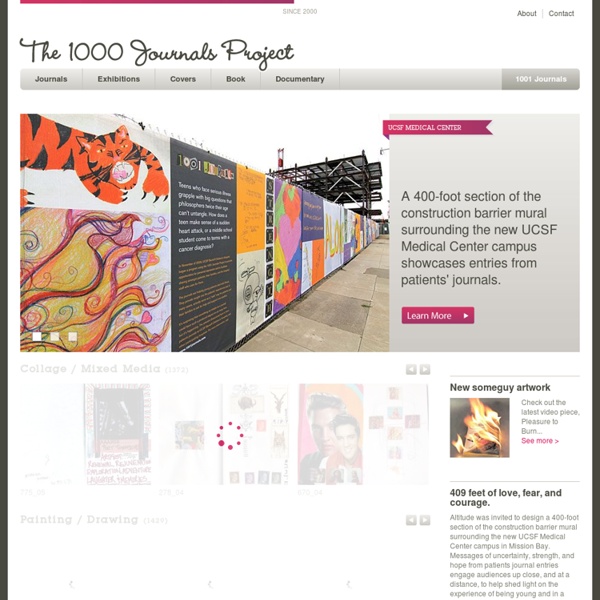 Vintage Soviet Posters & Propaganda Moor, Dimitri.1st of May - A Festival of Labor, 1920 Moor, Dimitri. Cossack - Who are you with, them or us?, 1920 Creative Writing Prompts Write a scene that includes a character speaking a different language, speaking in a thick accent, or otherwise speaking in a way that is unintelligibe to the other characters. (Note: You don't necessarily need to know the language the character is speaking—be creative with it!) Describe a character's reaction to something without explaining what it is.

Big Doodle Big sharpie doodle! Big Doodle - sharpie on mat board - 40" x 32" Artwork © Lawrence Yang 2009 my blog | my site | purchase inquiries Paul Cadden's Hyperrealistic Drawings Made with Graphite and Chalk Paul Cadden is a Scottish-born hyperrealist artist who creates painfully realistic artworks using only graphite and chalk. I’ve posted some pretty realistic drawings in the past, like Rajacenna’s detailed celebrity portraits, Juan Francisco Casas’ photo-like ballpoint pen drawings, or Paul Lung’s pencil artworks, but the pieces you’re about to see are on a whole other level. Using simple materials like graphite and white chalk, Paul Cadden is able to replicate complex photos down to the tiniest details. Whether it’s the countless wrinkles on an old man’s face, the smoke from a lit cigarette or the water dripping from someone’s face, he makes it look unbelievably realistic.

ikeduende.com Tamayo on Ikebana Ikebana is not just about flower arranging. Through the act of ikebana, you become involved in the process of terminating the life of a botanical creature, of discovering the beauty, mystery and power of plants, and the variety of possible outcomes is simply enormous! By creating a momentary art piece, ikebana instills in us a positive attitude, a fortitude and an ability to concentrate deeply. This is one way to enrich our lifestyle. Spectacular Moleskine Doodles Explode with Energy - My Modern Met Philippines-based illustrator Kerby Rosanes proves that doodling can be so much more than scratching unintelligible scribbles on paper. Through his Sketchy Stories blog, Rosanes shares his wonderful world of doodling in a simple Moleskine sketchbook. Equipped with an ordinary Moleskine, a few Uni Pin drawing pens, and his innate gift for drawing, the artist is able to transport viewers to a world where tiny, cartoonish creatures explode with gusto to make up larger entities. Each of the illustrator's complex and crowded sketches are filled with minute details that allow the eye to wander and discover new characters and designs at every turn. The portraits are immediately mesmerizing, but even more spectacular when looked upon closely.

Internet Memes Timeline Trololololololololololo man Feb 28, 2010 6:00 PM Added to Youtube in November of 2009 the Video "Я очень рад, ведь я, наконец, возвращаюсь домой" had only few views until it was posted into several music blogs in march of 2010. Still life: Bent objects UPDATE: The Return of Bent Objects Wires transform these objects from inanimate to hilarious works of art. Little polish girl McDonalds as Sculpture Materials Yeah, this is where those come from Dancing Queens