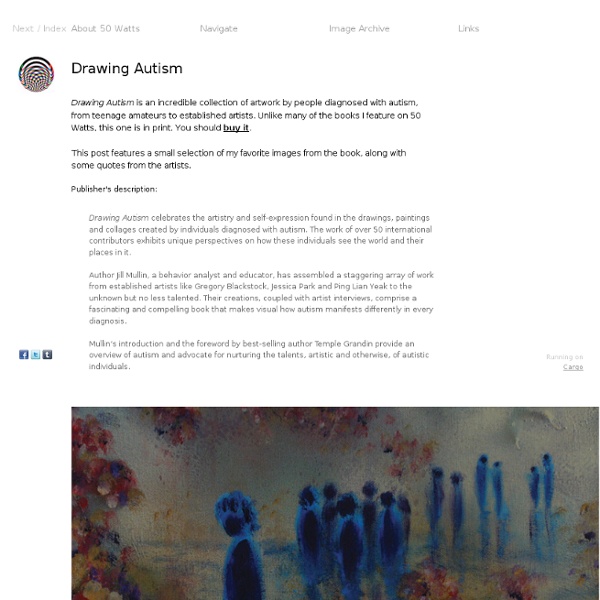 Drawing Autism is an incredible collection of artwork by people diagnosed with autism, from teenage amateurs to established artists. Unlike many of the books I feature on 50 Watts, this one is in print. You should buy it. [Amazon link to the new reprint which comes out April 2, 2014 from Akashic.] This post features a small selection of my favorite images from the book, along with some quotes by the artists. Publisher's description: Over the last decade autism spectrum disorder (ASD) has become an international topic of conversation, knowing no racial, ethnic, or social barriers. Donna Williams, The Outsider What was the inspiration for this piece? "The Outsider" is about joining in from the periphery. An excerpt from the artist's answer to the question, "At what age did the act of creating art enter into your life? I was deeply mesmerized with all things aesthetic and sensory from at least 6 months of age. Felix: Imaginary City Map, Age 11 What was the inspiration for this piece None. D.

Never Be My Friend When I'm bored, I browse through my friends' Facebook images, choose my favorites, and draw them. Sometimes I take... liberties. Let's just call it artistic license. R.I.P. Chloe's grandma. Judith Ann Braun's Fingers Are Magical With an art career spanning more than three decades, Judith Ann Braun has tested the limits of her artistic musculature. She began as a self-described “realistic figure painter,” and worked through the struggles common to anyone who endeavors upon an artistic pursuit, that of searching for one’s own voice in the chosen medium. Fast forward to the 21st century where the evolution of Braun’s work has brought us to the Fingerings series, a collection of charcoal dust landscapes and abstracts “painted” using not brushes but her fingertips. Braun has a specific interest in symmetry, as evidenced by the patterns she follows in a number of the Fingerings pieces as well as work in the Symmetrical Procedures collection.

Featured Geek Artist: Coran &Kizer& Stone - This Art is&Awesome!... There are so many artists in the world that do such great work, we want to try and give exposure to as many of them as we can so we've starting a Featured Artist column that will focus on one artist, and a collection of their work. This week we featured two pieces of Geek Art from Deviant Art user Kizer180 also known as Coran "Kizer" Stone, and . These are just a couple of pieces from the artist awesome collection of work. Gorgeous Bird Paintings by Adam S. Doyle Artist Adam S. Doyle who recently relocated to Hong Kong creates beautiful gestural paintings of birds, where the seemingly incomplete brushstrokes form the feathers and other details of the animal. In some strange way it reminds me of the story of the Renaissance painter Giotto who is rumored to have been able to draw a perfect circle without the aid of a compass, as if Doyle just picks up a dripping paint brush and in a few seconds paints a perfect bird. In reality his work demonstrates a profound control of the paintbrush and careful understanding of the mediums he works with.

Crazy Illustrations By Chow Hon Lam Chow Hon Lam is a t-shirt designer and a humorous illustrator from Malaysia. He has been completed this crazy project called Flying Mouse 365, which is create 1 design per day. I hope his illustrations can bring some smile and entertainment to the world. About the author 13 Disturbing Pieces of Art from History The media is often criticized for showing violent and disturbing imagery. Movies, TV, video games, tabletop RPGs, comic books, and various other things have all gone through periods where they're blamed for exposing children to dark and unsettling things. But as these fine art examples prove, violent and disturbing imagery is nothing new. (Obviously, this article contains some disturbing content.) 1.