9 Very Common Figure Drawing Mistakes, And How to Avoid Them 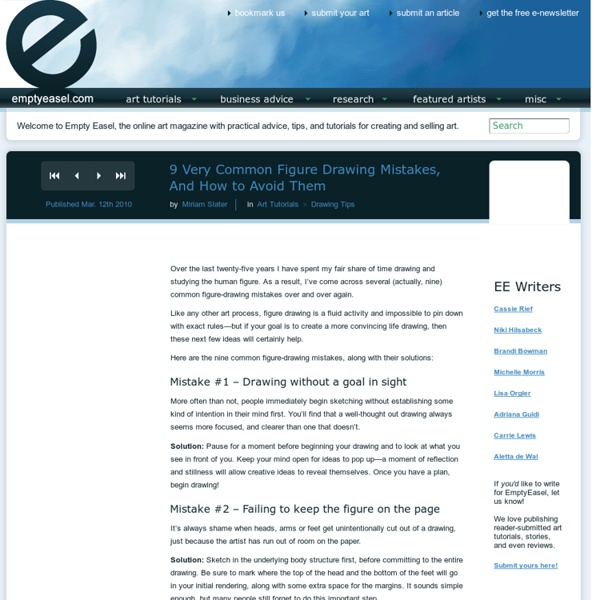 Over the last twenty-five years I have spent my fair share of time drawing and studying the human figure. As a result, I’ve come across several (actually, nine) common figure-drawing mistakes over and over again. Like any other art process, figure drawing is a fluid activity and impossible to pin down with exact rules—but if your goal is to create a more convincing life drawing, then these next few ideas will certainly help. Here are the nine common figure-drawing mistakes, along with their solutions: Mistake #1 – Drawing without a goal in sight More often than not, people immediately begin sketching without establishing some kind of intention in their mind first. Solution: Pause for a moment before beginning your drawing and to look at what you see in front of you. Mistake #2 – Failing to keep the figure on the page It’s always shame when heads, arms or feet get unintentionally cut out of a drawing, just because the artist has run out of room on the paper.

Drawing Hands This short tutorial is a just a small taste of a larger and much more in-depth book I wrote called The Mad Art of Caricature! The book is 175 full-color pages, lavishly illustrated and contains greatly expanded explanations of the concepts presented in this tutorials, as well and a great deal of additional material on caricaturing other facial features, posture, hands, expression and more, techniques on drawing from live models, doing caricature for freelance illustration and for MAD Magazine. This is a must have book for anyone interested in caricature, cartooning or humorous illustration. You can order it online here. How to Draw Hands Easily the most asked question I get is “how do you draw caricatures?”. Next to faces, hands are probably the most expressive and intricate part of the human form. I’m a cartoonist at heart, so the hands I draw are not realistic hands by most definitions. Breaking Down Hand Structure Not really much to it, is there? Relationships of Hand Structure

How to Draw the Nose Update 09-26-2012 – Above is a video version of this tutorial. For more video tutorials visit Proko.com and subscribe to the newsletter In this tutorial I will go over the structure of the nose and give detailed information about the bridge, ball, and nostrils of the nose. The Major Planes When drawing the nose, I’ll usually start by indicating the 4 major planes – top, 2 sides, and bottom. Anatomical Information I think the anatomical shapes in the nose are really interesting. The Minor Planes It’s important to memorize the subtle plane changes in all the different part of the nose. Minor Planes of the Bridge The Glabella is shaped like a keystone. Minor Planes of the Ball The ball of the nose isn’t perfectly round, but has very distinct plane changes. Minor planes of the Nostrils The nostrils, also called wings, curl under themselves similar to the septum. The hole of the nostrils often appears as a sideways comma shape with a sharp edge at the top, and softer edge at the bottom. 4.