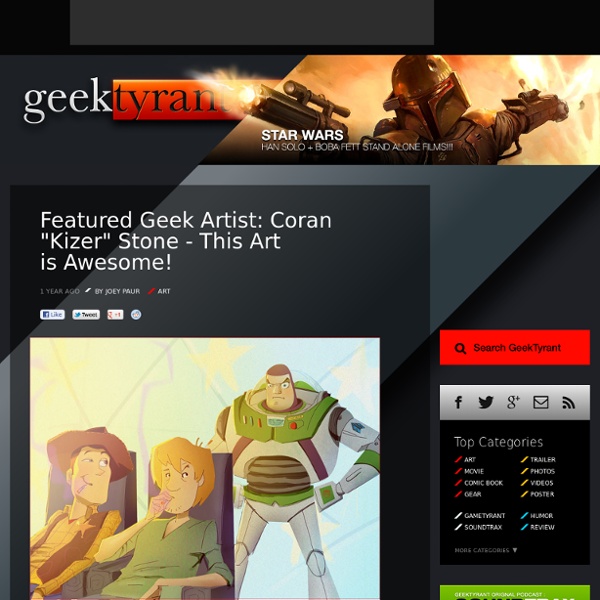 There are so many artists in the world that do such great work, we want to try and give exposure to as many of them as we can so we've starting a Featured Artist column that will focus on one artist, and a collection of their work. This week we featured two pieces of Geek Art from Deviant Art user Kizer180 also known as Coran "Kizer" Stone, and . These are just a couple of pieces from the artist awesome collection of work. I love this guys stuff, and I dig his style. I'm sure you will as well. I just wanted to share some more of my favorite pieces of his work with you, and get it all out there. I'm an artist that's been naturally extracting for some time now. Check out the artwork below and tell us what you think!

50 anime wallpapers Anime is a type highly stylized animation originally from Japan, where it’s characteristic style was developed during the 1960s and onwards. Today, anime is not only popular in Japan and Asia, but throughout the world as well, and is considered an art form on par with Western style animation. We’ve got 50 beautiful anime wallpapers for you, all in widescreen HD resolution.

The Art of Claire Hummel Claire Hummel was born and raised in the quiet hamlet of Los Angeles, California. Later embarking on a four year migration to Rhode Island to attend the appropriately-named Rhode Island School of Design, Claire now boasts a heady nostalgia for the Ocean State, along with an inappropriately-named bachelor’s degree, which has yet to attract bachelors to any degree. She is currently working as an artist for Microsoft Game Studios Publishing, and only has good things to say about her team and company. Browser not supported Drawing Autism is an incredible collection of artwork by people diagnosed with autism, from teenage amateurs to established artists. Unlike many of the books I feature on 50 Watts, this one is in print. You should buy it. [Amazon link to the new reprint which comes out April 2, 2014 from Akashic.] This post features a small selection of my favorite images from the book, along with some quotes by the artists. Publisher's description:

How to Draw Expressions Boy, I didn't know what I was getting myself into when I started this. I've had requests for some sort of expressions tutorial dating back a while now, so I figured, "Sure! I can explain expression drawing...and it'll be way better than all those tutorials out there that are nothing but charts of generic expressions. Yeah! Just give me a day or two to whip something up..." 25 Hilarious Illustrations by Glennz Jun 14, 2010 Glenn Jones is a graphic designer and illustrator from Auckland, New Zealand. ‘GLENN’ from ‘NZ’ = GLENNZ; which was his user name on the T-shirt design site Threadless.com. What started as a hobby quickly became a booming success, eventually leading to the launch of his own t-shirt site GLENNZ.com, where he now sells all of his designs.

30 Stunning and Inspirational Comic Covers In the past it was rejected as a secondary form of art, the 20th century transformed comics into a mass medium. From comic strips to graphic novels, the gender has increasingly grown in number of publications and popularity. With the expansion of the gender came the necessity of creating covers that look amazing and attract new readers. Comic book covers are not only the preview of what's under them, but stunning works of art. British Rubbish: Shadow Art Tim Noble and Sue Webster use garbage to make crazy sculptures with recognisable shadows for their series British Rubbish. Share