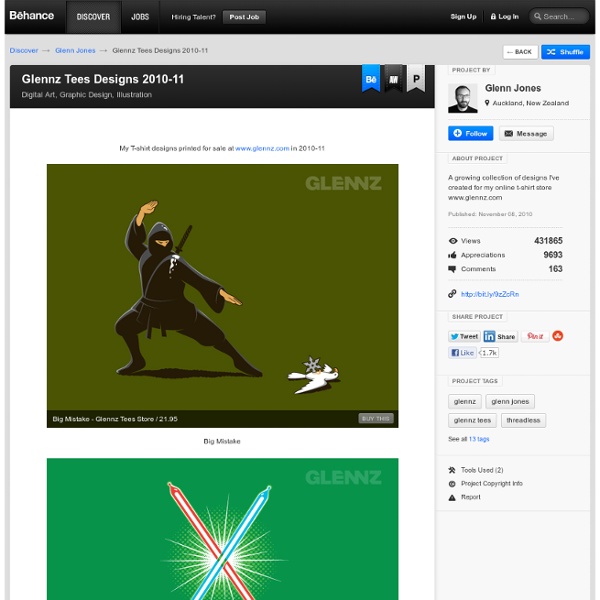 koikoikoi.com - Visual Arts Magazine, g... Matthew Cusick artist from Dallas, Texas, creates these amazing portraits and landscapes pasting portions of old geographical maps. > mattcusick.com Horrible Cards Horrible Cards are Copyright © 2012 Matthew Inman. Please don't steal. The Oatmeal Crazy Awesome Paintings by Vladimir Kush Here is a collection of the incredible paintings of Vladimir Kush. Vladimir has been creating these surrealistic paintings since the late 80’s. I’m extremely impressed by his work, and you should be as well!

Crazy art by Glennz Roleplay. Learn to play songs by ear! Free Ear Training.[Video Tutorial] How to build google chrome extensions Glenn Jones is awesome ...and crazy. t-shirt latch hook rug tutorial I really love flokati rugs. I have two that are safely tucked away in my parents basement awaiting our reunion. When I learned that I would be having a child and building a nursery for him, I wanted a flokati. A gray one. Being a flokati snob though, I knew that I couldn’t afford the price tag ( ), and I knew that I would be too precious about the rug ( ). So I chose the only sensible alternative: I would make a rug.

Split Family Faces Cousins: Justine, 29, & Ulric, 29 How much do you and your family members really look alike? Quebec, Canada-based graphic designer and photographer Ulric Collette has created a shockingly cool project where he's exploring the genetic similarities between different members of the same family. By splitting their faces in half and then splicing them together, he creates interesting new people that are sometimes quite normal looking and other times far from it. He calls this series Genetic Portraits. (Did you notice that Ulric, the photographer, is one-half of some of these pairings? How To Lead A Creative Life [Infographic] [Close Window] By Jason Feifer Our complete guide to making your inner genius your greatest on-the-job asset. Back to article >> Infographic by Pop Chart Lab

Speakers That Think Outside The Box Your computer has a paint job similar to a Ferrari. Your phone looks like an alien communication device. Your wallet is made of recycled rubber. You clearly aren’t a person content with coloring in the lines or thinking inside the box when it comes to design, so why should your speakers be so… conventional? Snap out of the fiberboard sound tomb you’re used to with these speakers that think outside the box. Hive Modular Speaker System The 7 Grossest Creatures To Ever Wash Up On Shore Ahh, a romantic stroll on the beach. There’s moonlight, a warm breeze, soft waves lapping at your toes and a putrid, rotting carcass that smells so bad you can’t help but throw up. So.

Alive Without Breath: Three Dimensional Animals Painted in Layers of Resin by Keng Lye Singapore-based artist Keng Lye creates near life-like sculptures of animals relying on little but paint, resin and a phenomenal sense of perspective. Lye slowly fills bowls, buckets, and boxes with alternating layers of acrylic paint and resin, creating aquatic animal life that looks so real it could almost pass for a photograph. The artist is using a technique very similar to Japanese painter Riusuke Fukahori who was featured on this blog a little over a year ago, though Lye seems to take things a step further by making his paint creations protrude from the surface, adding another level of dimension to a remarkable medium. See much more of this series titled Alive Without Breath over on deviantART. (via ian brooks)

14 Great Banksy Street Art Photos and Quotes! “There are four basic human needs; food, sleep, sex and revenge.” – Banksy “Nothing in the world is more common than unsuccessful people with talent, leave the house before you find something worth staying in for. ” – Banksy “Think outside the box, collapse the box, and take a fucking sharp knife to it.” – Banksy What a dump! A beach that used to be covered in trash is now covered in sea glass as the waves have turned the garbage into natural art By Meghan Keneally Updated: 03:12 GMT, 9 January 2012 Long before there were recycling bins in every household, the standards for where and how people can deposit their trash were much lower and less regulated. While that was bad the environment in some parts of the country and may well have done years of irreparable damage to the atmosphere, there is one spot where shameful trash deposit practices lead to something rather beautiful. Glass Beach near Fort Bragg in Northern California used to be the spot where residents brought all forms of their trash- from their old cars to their kitchen leftovers- to a dump located on the beach starting in 1949. Meeting of two worlds: Sea glass now covered the surf on Glass Beach in Fort Bragg in Northern California Back to nature: Though the beach used to be the location of a town dump, the glass that was thrown away has been beaten down by the waves so now it is all sea glass